Elizabeth Warren's new fight: Why even the Tea Party backs it!

Banks that try to take private losses and pin them on taxpayers may have a new problem. Here's what you should know 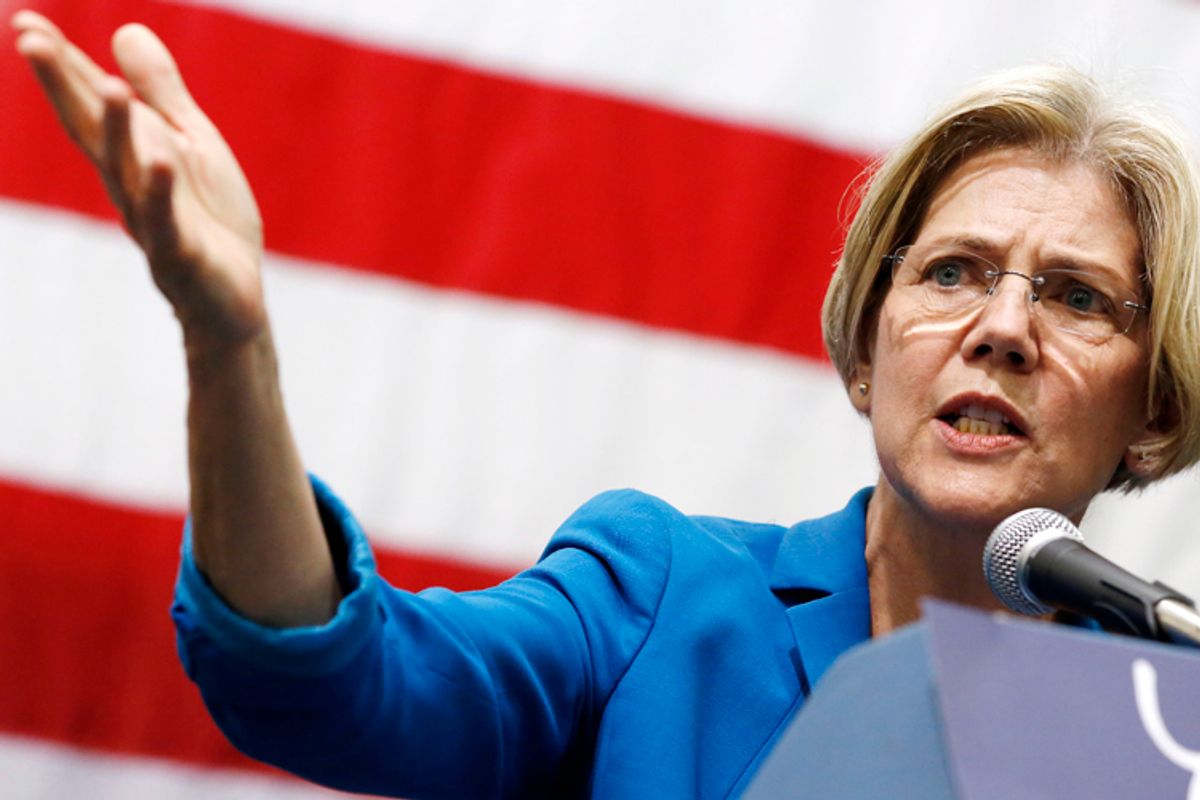 “Banking should be boring.” That’s the slogan accompanying Sen. Elizabeth Warren’s latest project, a highly anticipated bill that would reinstate the firewall between commercial and investment banking, first instituted after the Great Depression as the Glass-Steagall Act. Warren’s implied goal is to make the institutions that take customer deposits, and perform simple lending, smaller and less risky. If a bank wants to gamble in the Wall Street casino, under her legislation, they can’t accept taxpayer support.

Critics argue that this firewall had nothing to do with the 2008 crisis. Lehman Brothers was purely an investment bank; Washington Mutual, a depository institution; Countrywide, a mortgage broker. All of these financial behemoths failed, and Glass-Steagall would have done nothing to stop that.

This neglects the mass of interconnections between different types of bank activities made possible by decades of unraveling Glass-Steagall and other regulations. Lehman’s collapse threatened JPMorgan Chase because of its connections to the investment banking sector; Countrywide’s mortgage lending threatened Goldman Sachs because of the proliferation of mortgage-backed securities and credit derivatives based on them. All these point to the size and complexity of the megabank hubs as a serious impediment to a safe banking system.

So why not just directly cap bank size, or attack the problem from an angle, by increasing the amount of equity capital (either in stock or retained earnings) banks would have to use to absorb their own losses? Currently, banks finance most of their operations through borrowing; these highly leveraged institutions can generate higher profits than a more conservative bank, but a crash triggers a crisis with counterparties (the partners they borrowed from) that can cascade through the financial system.

Banks do this because of explicit and implicit government supports that make them “too big to fail,” eliminating any downside risk to borrowing. The way to dismantle this is to force more financing through equity; in that scenario, a bank could take as many risks as they want, but they, not the taxpayer, would pay the price if trouble arose. Banks would have a choice: significantly increase their capital load, or shrink to avoid the requirement. And since increased equity financing is less profitable, they will assuredly opt for the latter.

There is now a sweeping consensus on the need to do something to attack this problem. There’s active, bipartisan legislation from Sherrod Brown and David Vitter that would increase capital requirements on the biggest banks. Why didn’t Warren just sign on to that? The answer is that, while Brown and Vitter never got a vote, they won the debate where it counted, inside the financial regulatory agencies. Over the past couple of weeks, regulators, led by the Federal Reserve, have increased requirements for the top eight U.S. banks, along the lines of Brown-Vitter.

It’s true that they didn’t go nearly as far as the legislation recommended. The Fed would force a 6 percent equity financing ratio (so for every $100 banks lend out, $6 would have to be financed with capital), for example, while Brown and Vitter called for up to 15 percent. But 6 percent would actually double the current requirement agreed upon by international regulators. And it sets an important precedent that the system can be made safer through these types of regulatory actions.

The best part of this is that this ratio strictly measures leverage, a simple ratio of capital to assets. It does not give banks a way out through creative accounting, by allowing different standards of “risk-weighted” assets, where they assign capital based on the risk of a loss on the particular asset.

We saw during the crisis that AAA-rated assets were actually not safe at all (put it this way, Greek debt was seen as risk-free under this standard). Moreover, the banks actively game this type of system; a recent report by global regulators showed that banks use their discretion on risk-weighting to understate overall risk, and subsequently overstate their capital by up to 20 percent. The simple leverage ratio cannot be gamed at the same level, making it much easier for regulators to handle. (Banks will still try to evade the regulation, of course, which is why the leverage ratio should be made even higher.)

The banking industry claims that this will harm lending by forcing the holding of more reserves. This is nonsensical.  Banks are already sitting on hundreds of billions in reserves, and they determine lending through demand in the marketplace. Moreover, capital does not equal reserves, it includes stock and retained earnings.

This sob story about restricting lending is really a story about banks a) not being able to give away profits to shareholders in dividends, which boosts stock prices; and b) not getting as high a return on equity, which will result in lower executive bonuses. Bankers, naturally, are concerned about making money, not whether some entrepreneur can get financing for the next great idea. As for competitive disadvantage with more loosely regulated global banks, another perpetual whine from the industry, the lowered risk that comes with new capital standards is a competitive advantage all by itself.

So the Brown-Vitter style of increasing capital requirements has already worked its way into the regulatory thought process, and future battles will not focus on whether to increase, but by how much.

This is where Warren’s Glass-Steagall restoration comes into play. Making banks safer will take more than one piece of legislation or one new rule. While Brown-Vitter focuses on absorbing losses, the Warren proposal tries to limit those losses on institutions that take government support, segregating them in sectors where investors take on their own risk. The two perspectives are complementary, and they go along with increased consumer protections and lending standards.

Warren’s big media profile and following among progressives may make her legislation sound like a silver bullet to the heart of the banks; in reality it’s part of a larger program of cracking down on a runaway industry that nearly brought the country to economic ruin just a few short years ago.

Again, members of both parties actually agree on this point. Brown and Vitter have teamed on capital regulation, while Warren has John McCain, who offered his own Glass-Steagall restoration during the Dodd-Frank debate in 2010, as a co-sponsor. Key regulators who pushed through the increased leverage ratio, amid much big-bank resistance, include Federal Reserve governor Daniel Tarullo, appointed by a Democrat, and FDIC vice-chairs Jeremiah Norton and Thomas Hoenig, appointed by Republicans.

Across the ideological spectrum, from the Tea Party to MoveOn, Americans want to stop forever the perverse situation where banks can rack up private profits but put losses on the taxpayer. If rallying around Glass-Steagall restoration helps move more people to act, that’s a choice worth making.

In addition, here’s an update on my series on Bank of America’s criminal conduct against homeowners seeking a loan modification. BofA has now responded to the whistle-blowers who alleged that they were told to lie to homeowners about their modifications, and received bonuses for pushing homeowners into foreclosure. The response is quite laughable, basically amounting to a demand that you believe rich executives over “disgruntled employees” who made only $15 an hour. In reality, the loan-level employees would know much more about how homeowners were treated than the guys in the executive suites, who build in plausible deniability to evade responsibility. It’s pretty hard to misunderstand the purpose of a gift card reward for reaching a “quota” of foreclosures. And remember, these employees came from all over the country, so it has nothing to do with a single “rogue” unit.