Readers are outraged. But does spotlighting an accused terrorist automatically "glamorize" him? 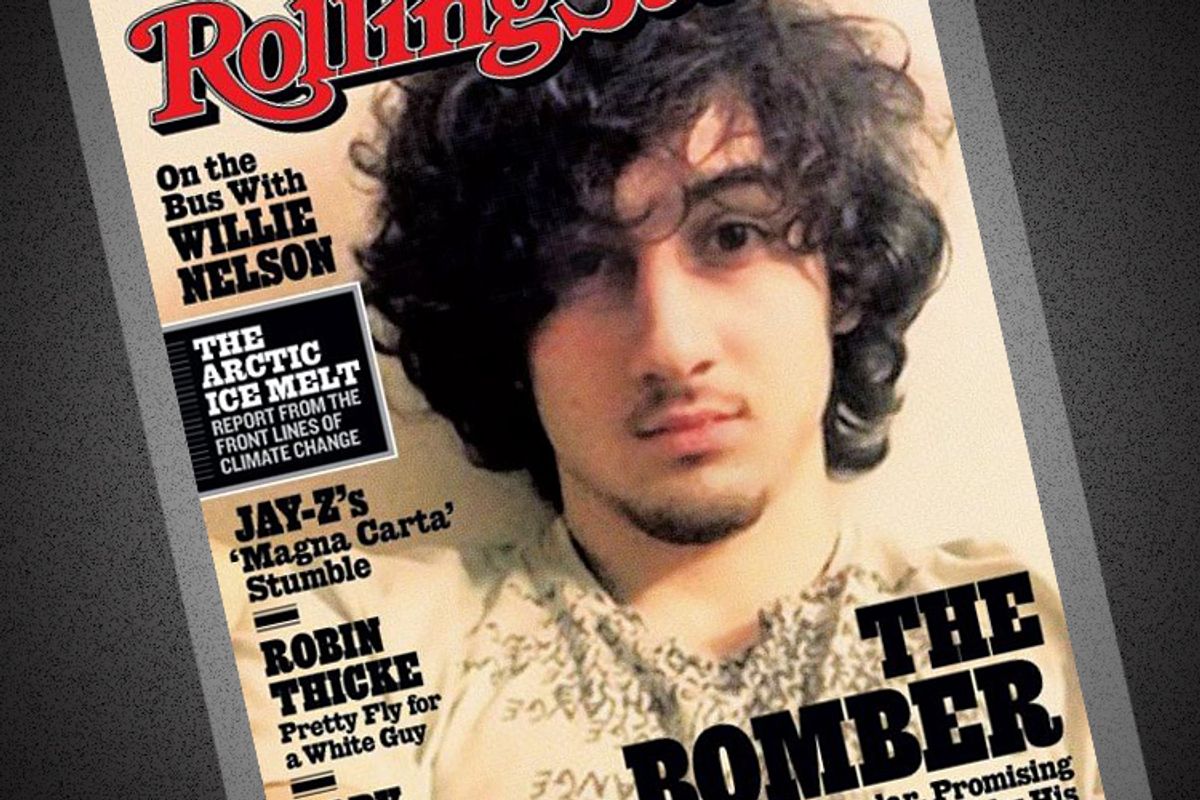 He's hot. He's sexy. He's an accused terrorist. Gracing the cover of the new issue of Rolling Stone with tousled hair and bedroom eyes, Dzhokhar Tsarnaev looks more like this month's emo chart burner than a bombing suspect. But is his photograph, as ThinkProgress asked Wednesday, "glamorizing terrorism"?

If you look at your watch, you can tell we were overdue for something just like this from RS. Every few years or so, the magazine wakes up from its routine of alternating snoozy images of wizened guitar gods with cleavage shots of contemporary pop tarts, breaking the endless loop of Jimmy Page and Katy Perry with something that seems calculated expressly to whip up a little moral outrage. Maybe it's a nude, vulnerable-looking John Lennon crouching around Yoko. Maybe it's Janet Jackson getting her boobies tweaked. Maybe it's the cast of "True Blood," naked and splattered with blood. Maybe it's Kanye, reimagined as a crucifixion-ready Jesus. There follows a predictable few days of discussion about exploitation and what's acceptable to display on newsstands, and then it dies down and we're back to Taylor Swift. This, after all, is a magazine that most recently gave its cover slot to Johnny Depp, a publication that's currently promoting a story about a Monkees reunion tour.

Frankly, it's the cover text that seems far more incendiary – RS unhesitatingly calls Tsarnaev, in large, bold type, "The Bomber," and promises a tale within of "How a Popular, Promising Student Was Failed by His Family, Fell Into Radical Islam and Became a Monster." Tsarnaev, who pleaded not guilty last week to 30 charges related to the April bombing in Boston, is officially considered a "suspect."

Yet reactions on Rolling Stone's Facebook page have been vehemently opposed to the cover image, pleading with the magazine to not "make celebrities out of these people," and calling it "classless" and "outrageous." (There are also, inevitably, Tsarnaev supporters who take umbrage with the cover's fait accompli depiction of him as if he were already convicted.) The Daily Mail, right on cue, has called it "tasteless."

But what's more complex in all the emotion over the cover are the accusations from readers who call it "un-American," calling it "disrespectful" and "spit in America's face." That kind of controversy is nothing new – it's the same anger that was sparked when Time named the likes of Hitler and Stalin their Man of the Year. But is it automatically unpatriotic to put an accused terrorist on a magazine cover? And who said Rolling Stone had an obligation to be patriotic in the first place? The controversy seems to center on the image itself, not reporter Janet Reitman's story – so would it have been somehow less offensive if the magazine had put a picture of Robin Thicke on the cover this issue and buried the feature within? Or if it had chosen a photo of Tsarnaev that made him look more like the "monster" RS states he is and less like late-era Kurt Cobain?

Tsarnaev doesn't have a hit song or a hot TV show, but Rolling Stone also covers news and politics, and Tsarnaev is newsworthy. Just like when, over 40 years ago, Rolling Stone put Charles Manson on its cover, looking every bit the long-haired rock god -- because that's what Manson looked like. With news comes notoriety, and a photograph is not automatically glamorization. But the fury over the Tsarnaev image shows that it's not always so clear, and the unease that the fuzzy line between infamy and fame brings.