From its historical lies to its family-values messaging, the sneakiest Christian movie of the year is a real horror 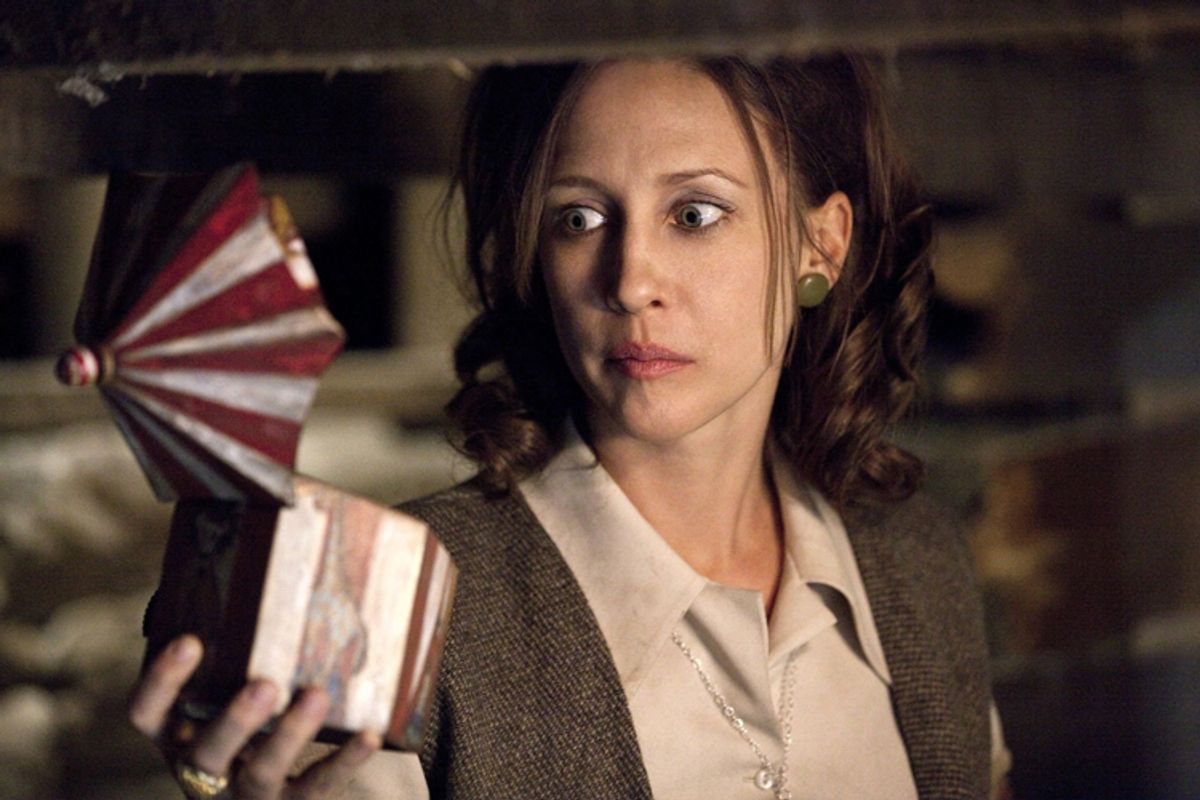 “The Conjuring” is an old-fashioned horror movie, almost old-fashioned to the point of meta-ness. I don’t just mean the 1970s setting, the haunted house in New England, the family under siege, the demonic possession, the pair of celebrity ghost-hunters and the Roman Catholic exorcism. I also mean the film’s deeply reactionary cultural politics, and the profound misogyny that lurks just beneath its surface. I don’t know how intentional this was on the part of the filmmakers – possibly not much – but “The Conjuring” is one of the cleverest and most effective right-wing Christian films of recent years. It’s a movie about America’s obsession with evil, and how easily that gets pointed in the wrong directions. It’s a movie based on the reassuring premise that when something is wrong in your family, your community or your country, you don’t have to worry about the priests, the cops, the dads or the other male authority figures. They’re the good guys. Blame the women.

Before I go further with this tirade, let me back up and say that I have mixed feelings about “The Conjuring,” which horror buffs will find a highly satisfying, well-crafted film in a classical mode, with plenty of scares and very little gore. It features Vera Farmiga, an actress too strange and too powerful for mainstream Hollywood stardom, playing swooning clairvoyant-lady Lorraine Warren in regal, buttoned-up costumes that stop just short of outrageous parody. Actually, it’s got a terrific cast all the way around, with Lili Taylor cast against type as aw-shucks working-class mom Carolyn Perron, Ron Livingston as her truck-driver husband Roger, and Patrick Wilson in sideburns, uttering lines like: “Well, a foul odor could indicate some sort of demonic entity.” (Yes! Either that, or a casserole that’s been in the fridge too long.)

If the script by twin brothers Chad and Carey Hayes (once the lead writers on the ‘90s mystery-spinoff series “Baywatch Nights,” which is surely ripe for a camp revival) is frequently clichéd and idiotic, that’s not always a negative in horror-movie land. In playing “demonologist” and religious zealot Ed Warren, half of a famous real-life ghostbuster couple, Wilson repeatedly drives the movie toward "SNL"-style sketch comedy. (The three stages of demonic entanglement, as written on a classroom chalkboard: INFESTATION, OPPRESSION and POSSESSION. That also describes the mental deterioration that comes from watching Fox News for more than 10 minutes.) But director James Wan keeps the tone clean and straightforward, relying on camera angles, sound cues and ominous atmosphere to ratchet up the tension gradually and then delivering all the scream-inducing shocks you could want, right on schedule. I don’t know whether the young woman sitting behind me was a Warner Bros. plant, but her ear-splitting shrieks definitely heightened the experience.

Wan was a creator of the “Saw” franchise and directed its first film, and because of that has frequently been pilloried as an example of everything that’s wrong with contemporary horror. That was never totally fair, and in the wake of “The Conjuring” and the equally dopey but effective haunted-house flick “Insidious,” he is now revealed as a highly capable genre stylist, neither daring nor visionary but deeply committed to his craft. You often feel like he’s compulsively quoting something, as with the Scorsese-style opening shot that travels through the Perron family’s Rhode Island manse, showing us the main characters and their setting in a matter of seconds, or the various references to “Poltergeist,” “The Amityville Horror,” “Burnt Offerings” and so on. There are worse sins.

Like so many movies of this kind, “The Conjuring” is supposedly “based on a true story.” I roll my eyes at that phrase on a weekly basis, but let’s give credit where it’s due: There really was a Perron family who moved into an old farmhouse in Harrisville, R.I., in 1971, and to this day family members apparently believe the house was plagued with demons and spirits. Their case really was investigated by Ed and Lorraine Warren, a pair of self-appointed “paranormal researchers” too crazy to be fictional. Probably best known for their involvement with the “Amityville Horror” case of the mid-‘70s, the Warrens were hyper-religious Catholics whose pseudo-scientific demeanor, along with what you might call an ultra-square, proto-Goth sensibility, made them media stars during the cultural vogue for the supernatural that followed “The Exorcist.” (Ed Warren died in 2006, but Lorraine is still alive and consulted extensively with Farmiga and the filmmakers.)

It’s fair to say that the driving force behind the New England Society for Psychic Research, the Warrens’ nutbar organization, was their sense that Catholics in particular and Americans in general were losing faith – not faith in God, who remains pretty popular, but faith in Satan. If you can work your way through the stream-of consciousness prose on the Warrens’ hallucinogenic website, which appears to have been designed by demons, that comes through loud and clear. “A skeptical public is the best protection that evil has,” Ed Warren writes, “and I’m going to make sure that I expose that evil any way I can.” Catholic priests who deny the existence of the devil or refuse to perform exorcisms are betraying their own faith. “The devil exists. God exists. And for us as people, our very destiny hinges upon which one we elect to follow.”

Here’s the real “true story” behind “The Conjuring”: Any time people get worked up about a menace they believe in but can’t actually see – demons, Commies, jihadis, hordes of hoodie-wearing thugs -- they’re likely to take it out on the weakest and most vulnerable people in society. Just for the record, I’m fine with movies that ask us to suspend disbelief about God, the devil, alien abductions, the innate goodness of the United States of America and any other unlikely-to-impossible things you care to mention. Farmiga’s portrayal of Lorraine Warren as a tightly wound but oddly sexy psychic moonbat, with her Scottish-noblewoman wardrobe torn from the covers of romance novels, is very much worth the price of admission. Furthermore, I assume that James Wan, who was born in Malaysia, has no investment in America’s culture wars, and likely sees this movie’s retrograde politics as questions of style or genre. But the relentless focus of “The Conjuring” on married life, Christian baptism and the old-school Latinate mumbo-jumbo of the Catholic Church as essential elements in resisting evil – and on womanhood and especially motherhood as the fount or locus of evil – is just too much to overlook.

Without getting too deep into spoiler-hood, the Perrons’ house turns out to be inhabited by a demonic female spirit. She preys on the living, yearns to possess a delicious and vulnerable young female body, etc. Nothing new here in terms of horror movies, or borderline Judeo-Christian theology, or generalized male panic. But along with the overall tone of hard-right family-values messaging, “The Conjuring” wants to walk back one of America’s earliest historical crimes, the Salem witch trials of 1692, and make it look like there must have been something to it after all. Those terrified colonial women, brainwashed, persecuted and murdered by the religious authorities of their day – see, they actually were witches, who slaughtered children and pledged their love to Satan and everything! That’s not poetic license. It's reprehensible and inexcusable bullshit, less egregious but somewhat akin to making a movie that claims, in passing, that slavery was OK or that the Holocaust didn't happen. As a ninth-generation descendant of Abigail Faulkner, a convicted Salem witch who only escaped execution because she was pregnant at the time, I call down a terrible malediction upon the people who made this entertaining but indefensible movie.