Joss Whedon's costume designer: "I love working in sci-fi and fantasy because there are no rules"

Costume designer Shawna Trpcic speaks out on Captain Jack's coat, Jayne Cobb's hat, and "Much Ado About Nothing" 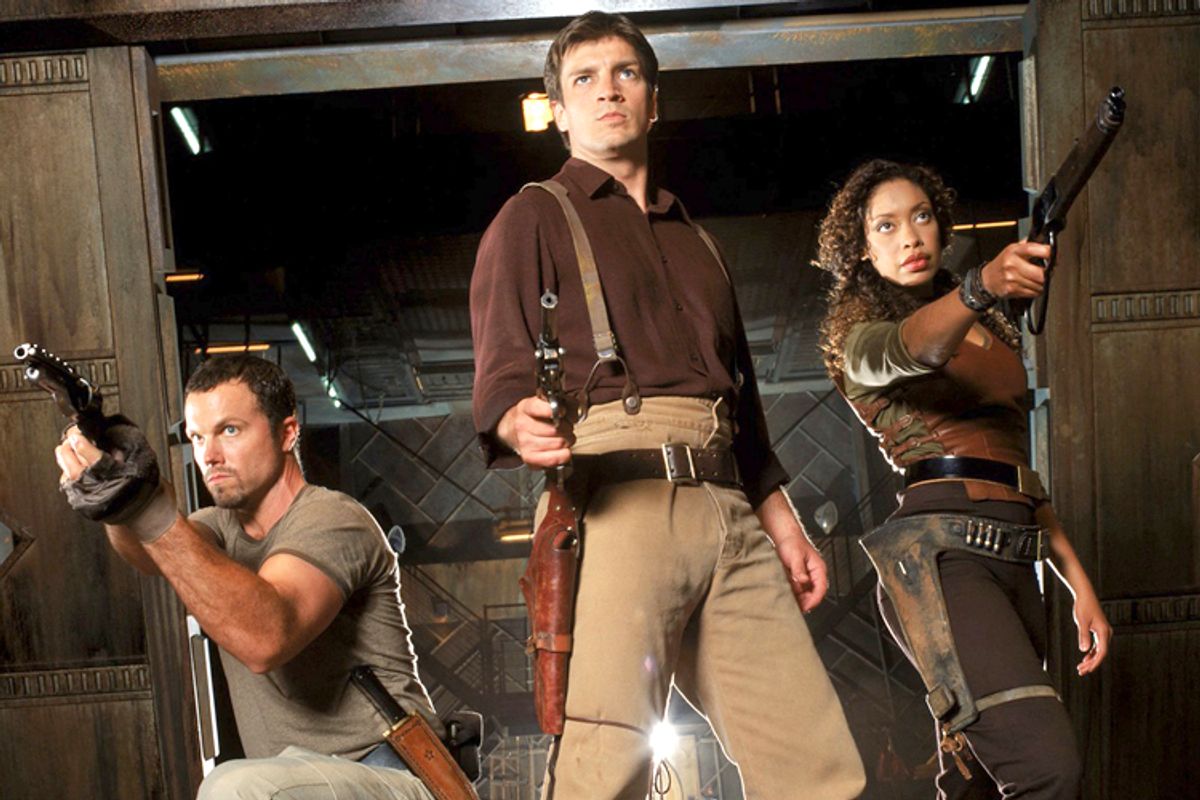 Even if you're a die-hard Joss Whedon fan, you probably don't know the name Shawna Trpcic. Yet costume designer Trpcic has created some of the most memorable images in the Whedonverse, as well as the looks in cult favorites like "Torchwood" and "Galaxy Quest." But though her talent for creating indelible sci-fi costumes is indisputable, she's most recently been the brains and threads behind the summer's most obsession-worthy movie wardrobe: the gorgeous clothes of Whedon's sharp, smart take on "Much Ado About Nothing."

Salon recently spoke to Trpcic about wardrobe, design and the hat that conquered Etsy.

You've designed some of the most iconic looks in the Whedonverse. Tell me about one my favorites: the much-copied Jayne Cobb hat from "Firefly." How did it come about, and did you imagine it would become so beloved? And I know you've been so supportive of fans who've made their own versions – what did you think about the controversy over licensing?

My grandma Erma used to make me Christmas slippers, hand-knit in varied colored yarns with a big pompom on top. They meant so much to me no matter how "cool" I got as a teenager. I would wear them anywhere.

In the episode where the gang goes to the post office, it was written that Jayne receives a package from his mother, and he had to be able to put it on in the scene. We were in a rush to come up with the idea and make it, so I thought, a knit hat. It was around the holidays and the office manager was knitting something for her grandma for Christmas. I grabbed [actor Adam Baldwin's] thrilling heroics hat from "The Train Job" and she used that as the pattern. I had done a sketch and used watercolor to color it, so the ombre look stuck. When the manager shopped yarns for me she came back with an assortment of oranges and reds, and Jayne's hat was born.

I am still so thrilled when I see a hat in public. Often folks have no idea who I am as I squeal in excitement at their hat. The controversy is so strange that I really can't comment, but people have made them to raise money for amazing causes and just to touch on the warmth and beauty of "Firefly." So, rock on!

It seems every Halloween I see more Dr. Horribles. The costume is so simple but so striking. What was the process with Dr. Horrible – did he go through different looks? How did you arrive at his trademark style, including his red coat at the end? I think that says so much about what he has become, without a word.

At my first meeting with Joss regarding Dr H's look, Joss drew a picture of a modern doctor coat. Because of Neil's Doogie beginnings, I suggested a classic evil doctor style coat and had many images I had put together to sell my idea. Joss liked it -- and I ended up using the coat that I used on Simon in "Firefly." Because of our relationship with the wardrobe department at Fox they were what I could get for the cheapest cost -- and we had no money! The idea for him to go red at the end was written in the script - I mixed a few different colors to dye a white coat that red to get it a deep rich blood color.

You've also worked on "Torchwood" – what is it about science fiction and fantasy that appeals to you? And what is your relationship with the fan world? You're designing for two deeply committed audiences when you're working with Whedon and the "Torchwood" crowd.

I love, love, love sci-fi and fantasy and I hope that any fan who has met me knows my love for them as well. I love the pressure I was under when I tackled redesigning the beloved Captain Jack coat. I was VERY aware I would be held accountable if I failed. John Barrowman is very conscience of his fans and very passionate about staying true to his character. I love working in sci-fi and fantasy because there are no rules as far as adhering to an already established style of a certain time period, but I truly love designing a character, no matter the setting.

"Much Ado" is a much more straightforwardly costumed film, but it's clear different groups of characters have different looks – like Benedick and his incredibly tailored friends, compared with Dogberry and his cohorts. How did you use clothes to distinguish characters? You use clothes as clues – like in "Cabin in the Woods" – what would you say are the subtler tip-offs here?

Nathan Fillion's comedy is both verbal and visual. I used the loosely fit suit and shirt to separate him from the wealth and "superiority" of the rest of the cast. The daisies on Hero were representative of her purity that was under fire, while the decadent textures and patterns of the villains was to separate them from the elegant beauty of the rest of the family. I loved using the soft silk chiffons on Amy Acker's "hard on the outside" Beatrice -- they showed her true spirit.

What were your influences? To me, Beatrice's look is very classic, body-conscious screwball comedy heroine, with a modern spin. How did you incorporate knowing it was a black-and-white film into your vision?

The black and white aspect was important to my decisions -- textures, weight of fabrics, light and dark subtleties, patterns. Amy was very soft and Hero was very tailored; Beatrice was very passionate and Hero was still pure and buttoned up. I love to celebrate the feminine -- the body, the beauty. And Amy in all her falling, arguing, festering was juxtaposed with the soft graceful beauty of her figure, and the way her dresses gently danced about her figure.

If I can ask a little about your personal life and your openness about your Christianity in a secular industry: What is it about faith that draws you, and how do you feel you incorporate it into your work, in the way you approach your characters? How does your theology degree help in your art and design? Do you still work with Juvenile Hall and teach art at a men's prison? I would love to know any thoughts you have on our justice system and what you've learned from your students.

I do not teach right now; with kids, home schooling and a challenging career I have new opportunities where I serve. But I think our justice system is incredibly broken -- I could write a book! I was asked to come to Sacramento and speak to a roomful of those who lead our justice/prisons and they smiled their political smiles and completely blew me off. They had no -- and I mean no -- desire to hear any of the many easy, cheap solutions I offered. It was a completely disheartening experience.

As a Christian, I try very hard to constantly reflect God's love, patience, kindness, grace and beauty. I fail, and even in my failure I try again to make amends. In the way I design, because of the trust I establish with my players -- we are able to work together in boldness and trust that allows me to take chances and be more creative.