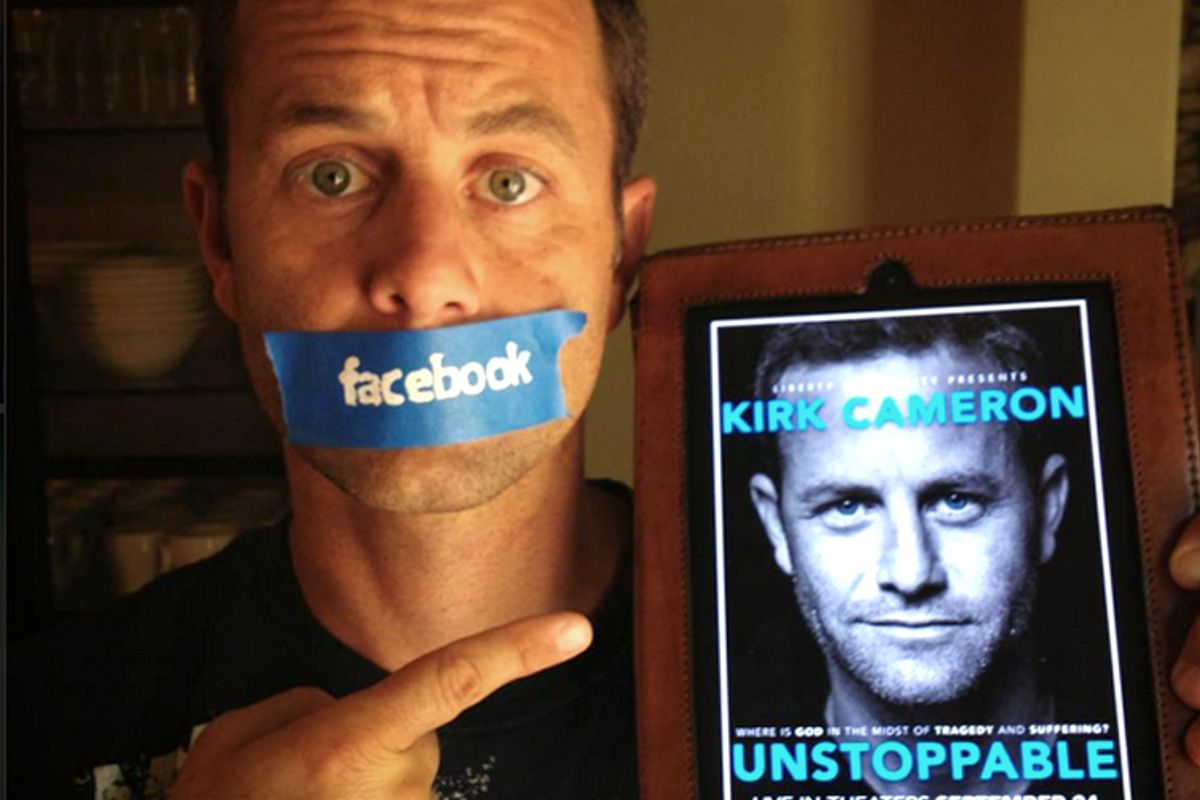 Oh, Facebook, you cutups. The reasoning behind what you allow and what you ban is tougher to crack than the Voynich manuscript. You have a history of turning a blind eye to some outstandingly rapey content while getting medieval on breastfeeding mothers. But while we're not exactly members of the Kirk Cameron fan club over here ourselves, is it possible you've really wronged the former "Growing Pains" star and known foe of evolution?

Cameron has over the past several years grown into an A-list spokesman for the Rapture, thanks to his immensely popular "Left Behind" series and other doomsday-friendly Christian titles. But last week, Cameron claimed that the trailer for his newest movie, "Unstoppable," was flagged by Facebook for being being "abusive," "unsafe," and "spammy" and invited fans to "Try to post it yourself and see!"

Cameron, whose penchant for selfies is unrivaled only by seventh-grade Instagrammers and Justin Bieber, had recently posted a link to the trailer, along with a photo of himself looking at, um, himself in the poster image. After the alleged censorship, he posted another photo of himself, now with blue tape and the Facebook logo over his mouth, pointing at... his image. He wrote that "This is my most personal film about faith, hope, and love, and about why God allows bad things to happen to good people. What is 'abusive' or 'unsafe' about that?!" He then posted another photo of himself, this time with black tape and the YouTube logo, claiming victoriously that "Facebook has apologized and welcomed us back" after "millions of us joined together as one voice" -- but that now YouTube was blocking the trailer as "spam," "scam," and "deceptive." As the Wrap notes, for a guy who's no great fan of marriage equality, he sure doesn’t mind appropriating its supporters' tactics. The trailer is now on YouTube, thanks to what Cameron calls "your firm, loving, and clear voice."

The "Unstoppable" documentary, a production of Liberty University and "CamFam Studios," is appearing in theaters for one night only in September -- before no doubt moving on to home distribution. In it, Cameron tries to answer the question of "Why does God let bad things happen to good people?" by exploring "my faith, my questions and my doubts." I don't know the answer but based on the trailer, it involves mud and rain. SPOILER ALERT: Cameron says, "I came out the other end of this meat grinder with my faith stronger than ever before." And SPOILER ALERT: He promises to "settle once and for all that life is stronger than death, good is stronger than evil and faith is stronger than death." So get ready to end the existential questions that have plagued humanity since the beginning of our existence, shortly after Labor Day.

The controversy has certainly whipped up interest in and support for Cameron's project, and an avalanche of comments on his Facebook page. Yet while jumping all over a guy for legitimately promoting his new creative project does sure sound like a typical bonehead Facebook move, representatives for the social network have declined to comment on the incident. It certainly wouldn't be very Christian of a man like Cameron to exploit a censorship controversy to get attention, right? Those over 300,000 shares he got for his post are impressive, but he definitely wouldn't be exaggerating when he says that "millions of us joined together" to stand up to the tyranny, right?

While the full details of what happened to the movie trailer on Facebook and YouTube have not been confirmed by either site, what's certain is that Cameron's achieved an unquestioning windfall of attention, and plenty of headlines for being "banned" and "censored" and "blocked" -- until he courageously "blew the whistle" on the social media giants. And if, in his new film, Cameron truly demonstrates why God lets bad things happen to people, maybe the object lesson is -- so that they can turn that adversity into opportunity, and lots of free publicity.

Update: Facebook has now said the ban was a mistake. A spokesperson told the Christian Post, "From what we can tell, the address purchased for the movie was previously being used as a spam site and it hadn't been refreshed in our system yet." Dang, and I'd been hoping it was a godless plot after all. A Facebook rep told Salon Monday, "To protect the hundreds of millions of people who connect and share on Facebook every day, we have automated systems that work in the background to maintain a trusted environment and protect our users from bad actors who often use links to spread spam and malware. These systems are so effective that most people who use Facebook will never encounter spam. They're not perfect, though, and in rare instances they make mistakes. This link was blocked for a very short period of time after being misidentified as a potential spam or malware site." So thanks for trying to protect us from those "bad actors," Facebook.