Breaking: Kate Middleton not yet skinny

The duchess emerges with her son, but tabloids are too busy worrying about her abs 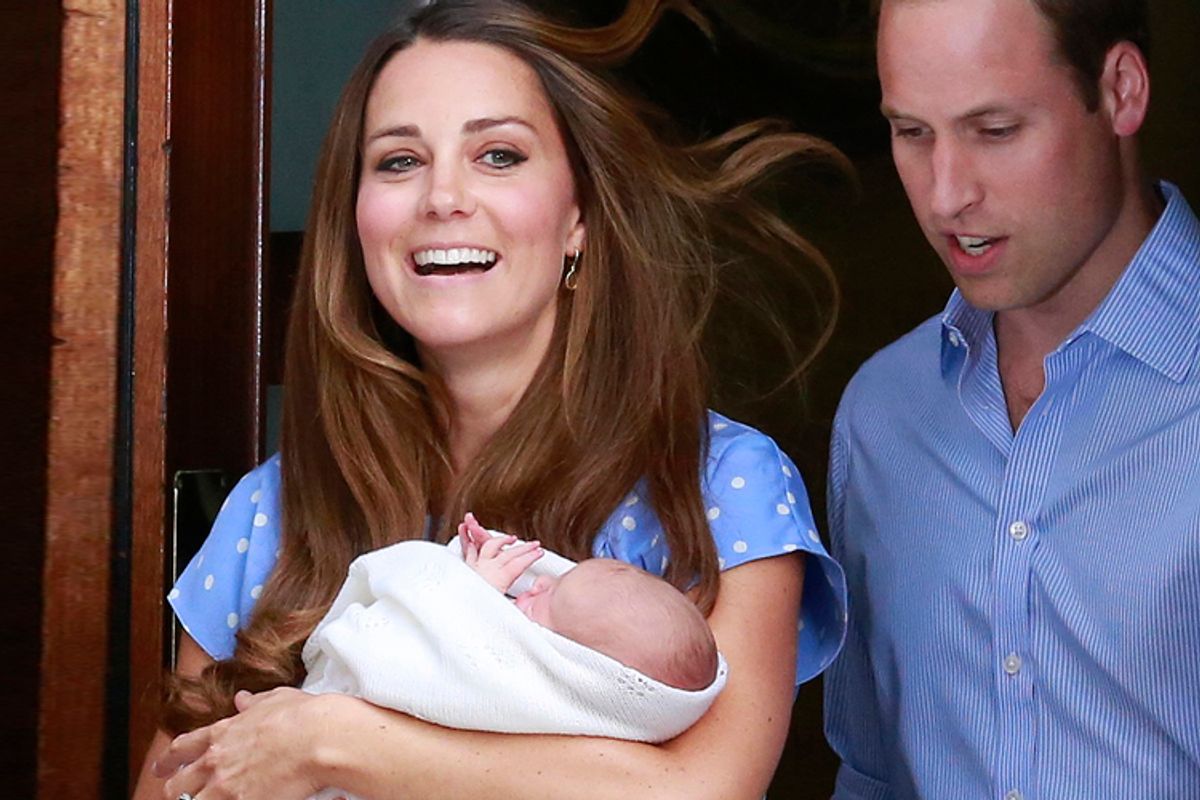 It's been two whole days already since Catherine, the Duchess of Cambridge gave birth to her first child, the heir to the British monarchy. Which means it's been one whole day since the speculation over when she's going to get her body back launched in earnest.

Yes, now that she's so "brilliantly" popped out a boy child, the former Kate Middleton is now fully expected to get down to the most important job in the world – fitting into that white bikini. A Tuesday headline sums it up – commenting on the image of the newly minted mother holding her infant in her arms, HuffPo declared, "Kate Middleton Debuts Post-Baby Body One Day After Giving Birth." Oh, and here I thought she was debuting the future king of England. Also, bite me, HuffPo.

In her polka-dotted dress, high-heeled espadrilles and perfectly cascading, shiny hair, Kate still looked exponentially more photogenic than a typical woman who'd given birth in the past day. (For contrast, check out Nina Davenport's "First Comes Love," which features a scene of a postpartum Davenport, hilariously marveling how her hair has transformed overnight into a tangled disaster zone.) In profile, though, Kate looked like a brand new mom, complete with an as yet undeflated midsection. And, as Rebecca Hains noted in the Christian Science Monitor Tuesday, where there is a new mother with a less than Shape magazine cover-worthy body, there are jerkwads. When CNN posted a photo of the new family on its Facebook page, commenters were quick to snark that the duchess looked "fat" and "pregnant again." And I easily pulled up a tweet from Wednesday from an amateur Female Body Inspector declaring, "Kate Middleton looks so fat today." As Hains rightly notes, "If a woman doesn't live up to Western society's near-impossible beauty ideals – even if she just had a baby the day before – it's open season on her."

But should Kate be bumming right now because the miracle of bringing her son into the world pales in comparison to the hot burning shame of not having a flat abdomen immediately after childbirth, OK! magazine is on it. The magazine has helpfully devoted its latest cover story to "Kate's post-baby weight loss regime" – with a pull-quote from her alleged trainer on how "super fit" Kate's "stomach will shrink right back." That's nice, because mine is currently roiling in disgust. Inside, it states that "The question on everyone's lips is not just the name, sex or weight of the baby, but also how Kate plans to return to her pre-pregnancy glory." The magazine also allegedly posted a tweet Tuesday asking if "anyone else had a 'how many people did she give birth to there?' moment," which has since disappeared from its Twitter timeline. Facing a storm of WTF? from readers, the magazine issued a quasi apology Wednesday, saying, "We would not dream of being critical of her appearance. If that was misunderstood on our cover it was not intended." They're so sorry we misunderstood. Thanks!

Even Kate's putative supporters have been offering backhanded praise – the eternally gross Daily Mail applauded Kate for her bold "decision not to hide her post-baby bump" – right next to a photo of Shakira in a bikini captioned, "No mummy tummy here!" Courageous stance there, you bloodsucking pack of ghouls. And what else was she supposed to do as she emerged from the hospital with a full press corps awaiting? Carry a barrel around her body?

Here's a shocker – nine months of stretching out your abdominal muscles are not magically reversed the moment a child comes into the world. You might not know that from the magazine spreads that feature celebrity moms from the neck up until they get themselves back into an acceptably hot, toned form. And by the way, if those changes are never reversed, if a woman's body is permanently different after growing a person in it, how about everybody grow up and get the hell over it, instead of obsessing on how swiftly she can make herself sexually alluring again?

A woman who's given birth can barely walk around the first few days; she not even supposed to exercise for a few weeks. And if she's nursing, she needs to be cautious about dieting while she's supplying her baby with his nutrition. In other words, back the eff off. No, the duchess is not the average woman. She will likely not spend the next three months in spitup-stained pajama pants, marveling at the stretch marks that now cross her abdomen and the bras that still don't fit. But she is nevertheless just another human woman whose body has just been through an extraordinary, life-changing experience. She now is beginning the work of raising a son whose late grandmother frankly and bravely spoke about bulimia and eating disorders, about the unbearable demands to be perfect, and a pressure that "leaves the individual gasping for breath at every turn" from "guilt, self-revulsion and low self-esteem." And the duchess doesn’t need to do a damn thing right now but love that baby.