Juror: Zimmerman "got away with murder"

Maddy, who almost held out for a hung jury, questions her choice 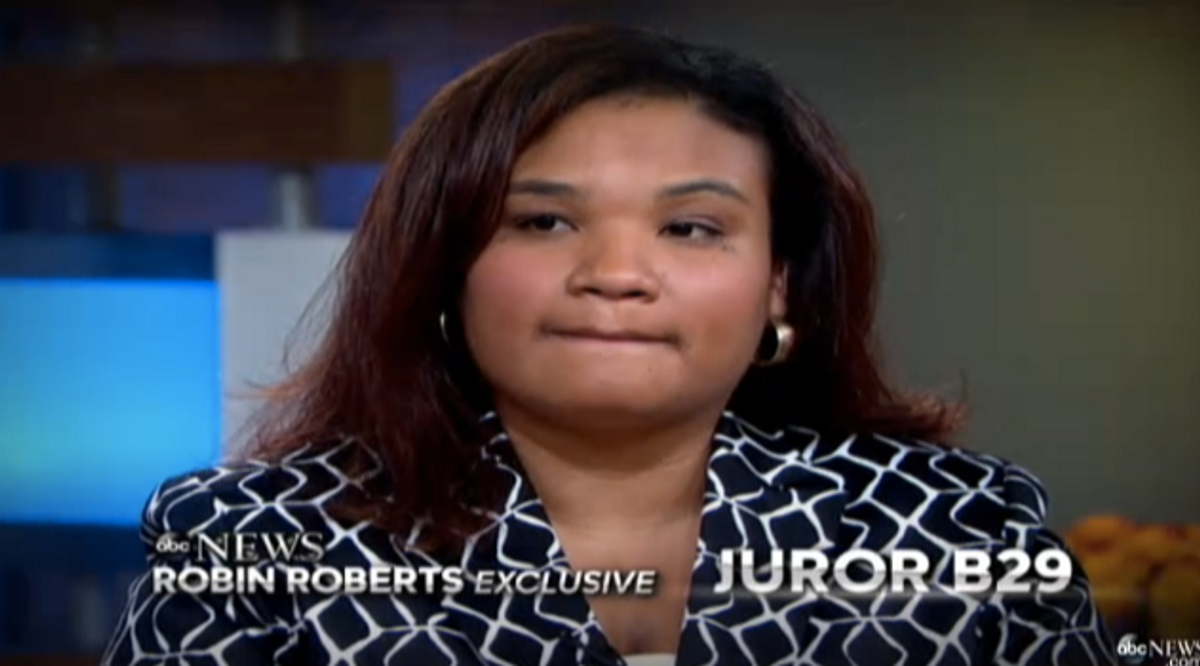 A juror identified only as Maddy told an ABC reporter that George Zimmerman, who was recently acquitted in the murder of 17-year old Trayvon Martin, "got away with murder."

"You can't put the man in jail even though in our hearts we felt he was guilty," said the woman who was identified only as Juror B29 during the trial. "But we had to grab our hearts and put it aside and look at the evidence."

She said the jury was following Florida law and the evidence, she said, did not prove murder.

Maddy, a 36-year-old nursing assistant, is Puerto Rican. She was the only only non-white member of the six-woman jury. "I was the juror that was going to give them the hung jury. I fought to the end," she said. Eventually she changed her mind, believing there was not enough evidence to convict him.

Despite the prosecution's claim that Zimmerman profiled Martin because he was black, Maddy said the case was never about race to her, although she didn't want to speak for her fellow jurors.

But her feelings about Zimmerman's actions are clear.

"George Zimmerman got away with murder, but you can't get away from God. And at the end of the day, he's going to have a lot of questions and answers he has to deal with," Maddy said. "[But] the law couldn't prove it."

As Maddy sees it, the crux of the matter is Zimmerman's claim that he shot Martin in self-defense:

"That's where I felt confused, where if a person kills someone, then you get charged for it," Maddy said. "But as the law was read to me, if you have no proof that he killed him intentionally, you can't say he's guilty."

When asked by Roberts whether the case should have gone to trial, Maddy said, "I don't think so."

"I felt like this was a publicity stunt. This whole court service thing to me was publicity," she said.

Even so, she doesn't seem to be sleeping easy:

She said she believes she owes Trayvon Martin's parents an apology because she feels "like I let them down."

"It's hard for me to sleep, it's hard for me to eat because I feel I was forcefully included in Trayvon Martin's death. And as I carry him on my back, I'm hurting as much [as] Trayvon's Martin's mother because there's no way that any mother should feel that pain," she said.