Milton Friedman would have turned 101 today. Would the Tea Party and "libertarian populists" make him proud? 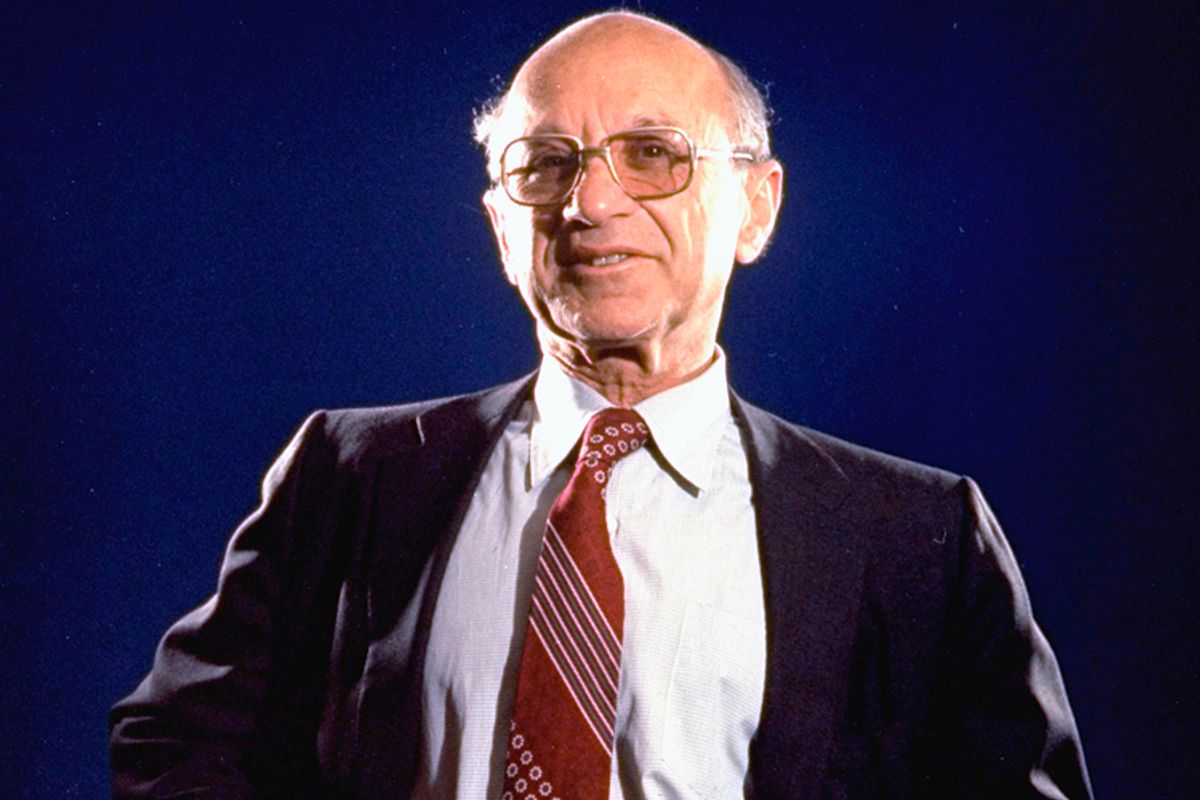 Today is the 101st anniversary of Milton Friedman’s birth, and it will be widely celebrated among the vast number of Americans who march in Tea Parties and wear tricorn hats in public. He will be hailed by the vast number of “libertarian populists” now burgeoning within the Republican ranks. But the new “libertarian populism” is increasingly at odds with the possibility of a shared future.

Libertarian populists love markets. One of their favorite proposals is privatization: If there is a problem, they look to markets to solve it. Milton Friedman wrote, “The most important single central fact about a free market is that no exchange takes place unless both parties benefit.” The statement fails to take into account that parties can only perceive potential benefits and, in the case of poor workers, may be unable to find the optimal market exchange. But there is a deeper problem.

The problem is that markets, being amoral, are necessarily immoral. Markets are essentially utilitarian, they maximize “happiness,” and each individual is free to choose what makes him or her happy. But what happens when one man’s pleasure harms another? As E.F. Schumacher writes, “Call a thing immoral or ugly, soul-destroying or a degradation to man, a peril to the peace of the world or to the well-being of future generations: as long as you have not shown it to be 'uneconomic' you have not really questioned its right to exist, grow, and prosper.” That is, as long as companies can make money drilling into Canada’s tar sands, who are we to question them?

Schumacher notes the core libertarian dilemma: “the market is the institutionalization of individualism and non-responsibility. Neither buyer nor seller is responsible for anything but himself.” But as a society, we want people to be free from slavish impulses and appetites and we want them to be responsible. We raise our children to love their country, to protect their environment, to aid their community. We tell them not to steal, never to hurt another human being and generally live in such a way that if everyone else also lived in that way, the world would be a better place. But, as G.A. Cohen notes, “the immediate motive to productive activity in a market society is (not always but) typically some mixture of greed and fear.” That is, upon taking on their first job, we tell our children, “throw away all that stuff we taught you; now all that matters is profit and loss.”

This creates one of the contradictions of capitalism: How long can a liberal democratic society (which relies upon cooperation, mutual interdependence and shared sacrifice) exist alongside a purely capitalistic system (which relies purely upon self-interest)? How long can markets “crowd out” all instances of social virtue before we descend entirely into chaos?

The libertarian reliance on pure self-interest is nowhere more clear than in the ideas of Ludwig von Mises, who developed Praxeology, the idea that all human action can be explained by self-interest. Milton Friedman accepts this proposition, stating in "Free to Choose," “The problem of social organization is how to set up an arrangement under which greed will do the least harm, capitalism is that kind of a system.” The problem is that greed and self-interest are not the exclusive, or even primary, human motivation. We know that soldiers jump on grenades to protect other soldiers. We know that John McCain chose to spend four years in the Hilton Hanoi rather than violate the Code of Conduct for Prisoners of War. We know that Mohamed Bouazizi set himself on fire rather than face the harassment of police.

Of course, we’ve all heard the inevitable response: They’re upholding some other value, they hope for gain in a future life, etc. The problem with this response is that eventually, once you keep pressing, libertarians provide a tautology: self-interest is whatever motivates us to act. Well, then, we are clearly really bad at defining our own self-interest. Libertarians face a double bind: Either their definition of self-interest is wrong (because people act for things other than self) or it’s tautological (because every action is self-interested). Either way, they severely confine human motivation for action.

The only way to solve these problems is to understand the individual within her society and her society’s mores. But libertarians have to reject the most important forms of community because these organizations -- familial, local, national, religious -- are not voluntary organizations, but are considered coercive. In a day and age when the rich live a life separate from the rest of us and when our use of fossil fuels endangers the lives of poor people across the globe, such an individualistic mode of thinking is not only wrong, but dangerous.

It’s important to recognize that some libertarian populists engage in a core hypocrisy: capitalism for the poor, socialism for the rich. They want to block-grant Medicaid and cut taxes for the wealthy. They want to cut food stamps but not necessarily farm subsidies. They’ll cut the minimum wage but extend the carried-interest deduction. And they say things like, “keep the government’s hands off of my Medicare.”

While Friedman was at least consistent enough to despise all government programs, the Tea Party wants to protect a few: the ones they benefit from. They excitedly adopt his “starve the beast” approach to government spending, but also gobble up government resources. Libertarian populism is the old supply-side garbage, as John Kenneth Galbraith noted, “that the work habits of the American people are tied irrevocably to their income, though in a curiously perverse way. The poor do not work because they have too much income; the rich do not work because they do not have enough income. You expand and revitalize the economy by giving the poor less, the rich more.” The Tea Party is selfishness embodied: “Government should help me, but not you! I’m a maker, you are a taker!” Some of us still envision a society where compassion and cooperation are valued, rather than callous competition -- alas, that seems as far away as ever.