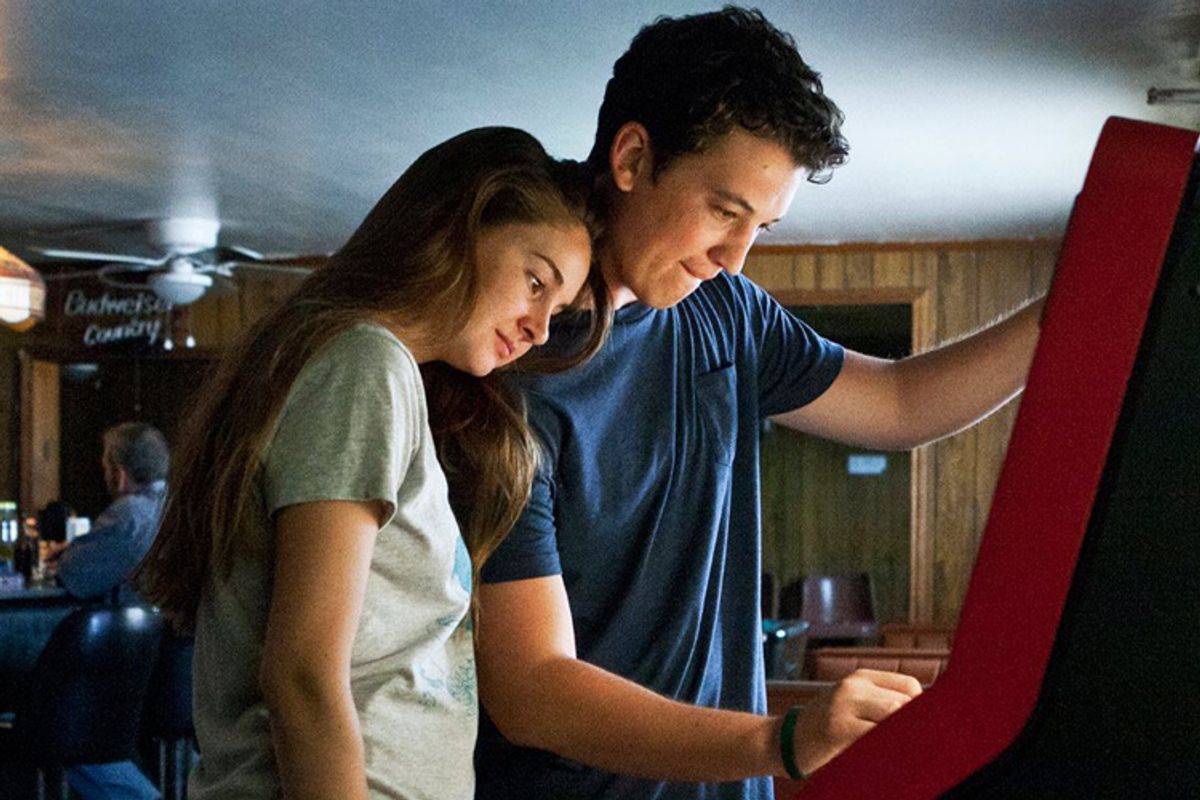 I think the fairest compliment I can pay to director James Ponsoldt’s compelling and restrained indie love story “The Spectacular Now” is that it often bugged me while I was watching it, but I couldn’t stop thinking about it afterwards, which made it an awful lot like observing someone else’s flawed love affair in real life. There were moments when I thought the teenage characters created by writers Scott Neustadter and Michael H. Weber (they’re the team who wrote “(500) Days of Summer,” this time eschewing Hall & Oates dance numbers for aching sincerity) were not well-constructed. Why does happy-go-lucky party boy Sutter Keely (Miles Teller) have to be a teen alcoholic straight out of an after-school special, and why is he hopelessly naïve about the fact that his missing dad is probably not such a great guy? Why is Sutter’s awesome new girlfriend, Aimee (Shailene Woodley), such a total doormat for his misbehavior once she falls for him?

And then I reflected that, oh yeah, decent and likable people often behave like complete idiots and hurt themselves and each other, and never more so than when they’re young and in love. If you’ve ever been either of those things – and that describes close to 100 percent of the human population – this movie will pack a highly personal emotional wallop. Sutter and Aimee think they’re in control of their lives, but they’re following powerful scripts they can’t even see – which, if we’re honest with ourselves, is what most of us do most of the time. As we watch “The Spectacular Now,” we stand just outside Sutter and Aimee’s life in suburban Atlanta, far enough away to see that this combustible romance might not end well, but not so far that we ever stop rooting for them.

Teller, a 26-year-old actor who’s been seen in “Rabbit Hole,” “21 & Over” and the “Footloose” remake, seems to be having a moment right now, and I can see why. He projects both macho bravado and extreme fragility; he’s the bad boy who seems redeemable. Sutter keeps trying to convince himself that his flirtation with the studious and virginal Aimee is just half a notch above platonic friendship, perhaps because his friends are incredulous. He’s on the rebound after getting dumped by Cassidy (Brie Larson), a popular, blonde overachiever type who correctly infers that Sutter’s life is heading into a cul-de-sac. Again, while we can see some of the deeper issues pulling Sutter and Aimee together – they’re both children of single moms, dealing with abandonment and alcoholism – Neustadter and Weber’s script only occasionally brings those things to the surface, and never wails on them too hard.

If Sutter is arguably the main character, the movie’s real emotional center is Woodley’s remarkable performance as Aimee. Woodley plays the lead role in the ABC Family series “The Secret Life of the American Teenager,” and deserved an Oscar nomination (but didn't get one) for her role as George Clooney’s daughter in “The Descendants.” It’s a teen-movie stereotype to have a beautiful young woman play the plain-Jane type, but Woodley is entirely convincing as a manga-reading geek girl who keeps her nose to the grindstone in a dysfunctional household, driving her drunken mom’s paper route before school. (She first officially meets Sutter -- it's safe to say she's been admiring him from afar -- because he’s passed out on somebody’s front lawn at 6 A.M.) It’s less that Aimee isn’t pretty than that she’s never devoted any time or energy to the conventional signals of high-school attractiveness, wears jeans and T-shirts every day, and takes shelter in the idea that boys don’t think of her “that way.”

Ponsoldt, who directed Mary Elizabeth Winstead and Aaron Paul in the memorable booze-marriage drama “Smashed” (I’m guessing this guy has alcohol issues in his family) and is supposedly making a drama about Hillary Rodham as a young lawyer, allows his actors to form an organic connection in long, single-shot conversations, which move gradually from the attitude-rich B.S. of teenage talk to the dawning recognition that something unusual is happening between them. If there are a fair number of conventional plot twists and character revelations – Sutter goes to visit his dad, with predictable consequences; there’s a low-key intervention and a car accident – the heart of this movie can be understood from its title. The moments that Aimee and Sutter spend together, including their exquisite first kiss and the almost unbearable intimacy of the first time they have sex, are indeed spectacular.

I continued to worry about these two long after the movie was over, and to think hackneyed Dr. Phil thoughts about how I hope Sutter has made some discoveries about why he drinks so damn much, and how Aimee needs to realize that she can’t allow herself to be endangered by someone she loves. I hope they’re OK! I’m really not sure they should stay together! And then there were the moments when “The Spectacular Now” dragged me back down the memory hole into my own past, and a girl named Christina whom I treated dreadfully many years ago. Give me one more minute, and I’ll become that guy on a barstool telling a story no one wants to hear; before we get there, I’ll say that “The Spectacular Now” is a memorable, imperfect, heartbreaking summer love story, a bit soapy in spots but loaded with power and feeling.