The housing "recovery" is a total sham

Forget the happy talk about the housing crisis being over. The stories from this Florida community will shock you 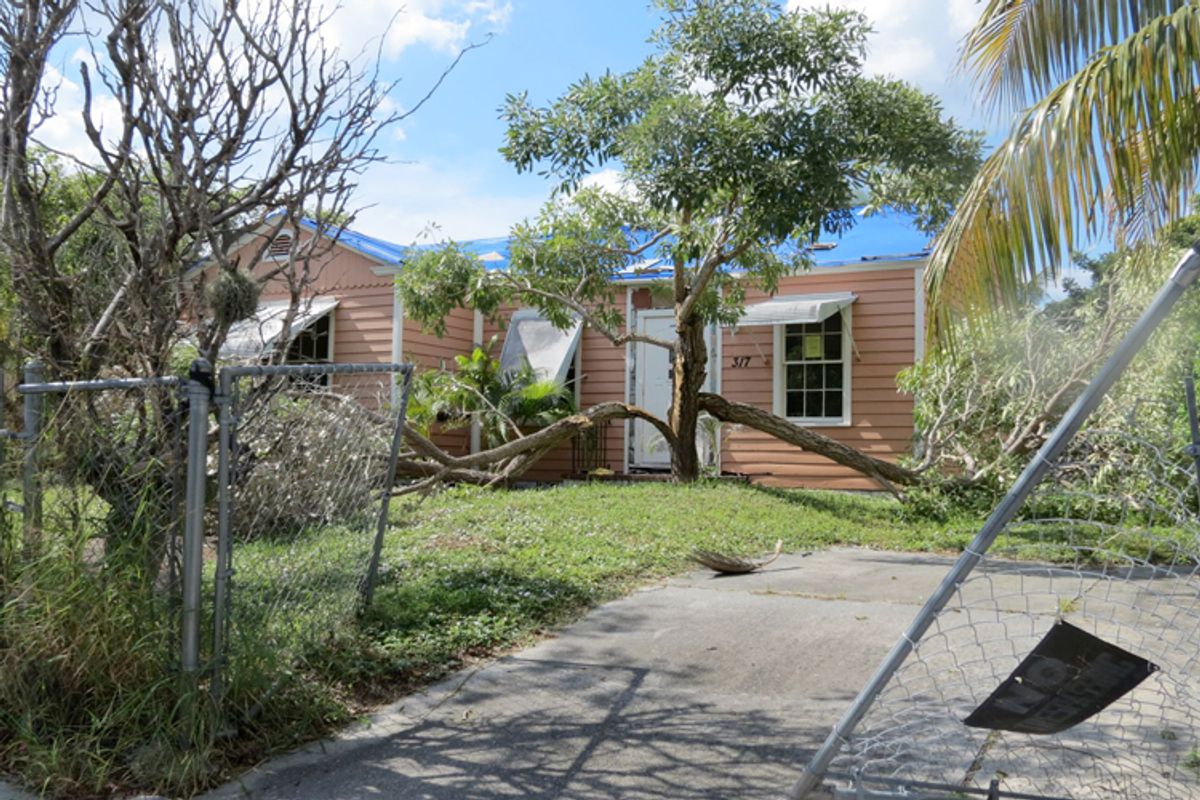 A house in Lake Worth, Florida (Lynn Szymoniak)
--

LAKE WORTH, Fla. – Out on the alphabet streets in this once-thriving Florida community, the houses are dotted with black mold. Some have buckled roofs. Others are hollowed out by fire, or the wiring has been stripped. Pests and critters have moved in as the people moved out. On some streets, half of the homes feature boards along the windows, and ubiquitous “No Trespassing: No Traspasar” signs in English and Spanish. “Those are to keep the drug sales out,” says my tour guide, Lynn Szymoniak of the nonprofit Housing Justice Foundation. “I’ve been stopped doing these tours, cops have told me, ‘you’re not supposed to be here.’”

At one time, these homes were exciting products sold by Option One, Ameriquest, New Century Financial, and other mortgage lenders who sprouted up during the housing bubble, and disappeared just as quickly. The explosion of lending pumped up this community, one of the oldest in South Florida (Lake Worth turned 100 this year), and raised property values to improbable heights. Houses that traditionally sold for $75,000 were suddenly going for $250,000 and $300,000. When it all crashed, prices fell 60% and the foreclosures rolled through. In one development called Strawberry Lakes, made up of nice, 2- or 3-bedroom masonry homes on quarter-acre lots, Szymoniak culled through records and found almost 1 in 3 homes in foreclosure. “You can find whole blocks gone here,” she said.

While nationally, home prices have bounced back, as analysts delight in what they call a housing recovery, in places like Lake Worth, prices remain buried. There’s not much chance for appreciation when you have reams of abandoned properties in the neighborhood. Lake Worth is one of those places across the country where the foreclosure crisis never ended.

Despite the handsome main drag in Lake Worth, full of nice restaurants and coffee shops, two blocks away, the streets denoted by letters of the alphabet (A Street, B Street, C Street) are simply devastated. Even some of the shopping centers and commercial buildings off the main drag are in foreclosure. “It’s like a flu spread through and everybody had to leave,” Szymoniak remarked. Practically all of the residential neighborhoods resemble a distressed city after a hurricane, with the landscape seeking to reclaim the properties. In fact, some are covered with FEMA tarps from hurricanes dating back to 2007 and 2008.

Sometimes, neighborhood watch cuts the grass so nobody can tell what’s abandoned. But it’s hard to hide the signals; a number of these homes have been vacant for at least five years. Some have cars in the driveway, which serve as combination storage lockers/makeshift homes. If the lights are on inside the house during the day, they’re probably on all year round.

“This is the vigil house,” Szymoniak says, stopping at a white house with yellow trim on North B Street, which often served as the meeting point for rallies to stop foreclosures. It’s owned by Deutsche Bank, and was featured in an hourlong story on the foreclosure crisis for German television. Boards cover every window, though the satellite dish remains. At one point it sold for $250,000.

The inflated sale prices present a serious problem for rehabilitating the community. Ninety percent of these properties are tied up in mortgage-backed trusts for large sums (“When you look them up, you’re just so amazed,” Szymoniak says), and the trustees don’t want to book the losses. So instead of selling off the old inventory, they hold onto it, hoping in vain for price appreciation or just wanting to avoid the reckoning. “If you have to keep investors thinking that you have a $300,000 property,” Szymoniak remarked, “and you want to carry it on the books for as long as you possibly can, then you don’t put it on the market, you just hold it back, and you let it go on forever.”

Recently, a few "For Sale" and "For Rent" signs have come back to the neighborhood, though just as prevalent are signs that border on desperate (“Aggressively Priced!”). In particular, speculators are buying in Strawberry Lakes, which was envisioned as more of a middle-class community. Some single-family units have turned over into rental properties, and the investors plan to profit off the rental revenue streams and flip them in a few years when prices come back. But Szymoniak thinks the new signs are actually a bad indicator, because the deals were typically done off-list through short sales. The reemergence of advertising means that inventory has started to build up again. Moreover, the hopes of high resale values are chimerical. “They think they can resell these properties, but they can’t,” she said. “Not at the profits they think they can.”

The holdouts in subdivisions like Strawberry Lakes tend to be seniors with nowhere to go, sometimes holding on by purchasing reverse mortgages. But even they struggle. One feature of the neighborhood is the Saturday morning garage sales, from people stuck and trying to make cash for bills. So the remaining residents in the community are not likely to be here for the long haul.

Back on the alphabet streets, we pass a nice shotgun house, with new construction and a fresh coat of paint. Lake Worth has received a notable amount of redevelopment money, and has tried to fix up a number of properties. But there’s not enough cash to deal with all the devastation. “It takes so much money to make this work because you have to do so many houses on a single street,” Szymoniak said. Instead of a full makeover, you see a new house wedged in between two vacant, boarded-up properties, and you wonder who would ever make the decision to live there.

There’s been a lot of chatter lately about what to do with these communities that remain victimized by the foreclosure crisis. Recently, the city of Richmond, California decided to press forward with a long-discussed and controversial eminent domain program, attempting to acquire several hundred properties below market value and resell them to the homeowners. Another plan that invites less constitutional challenges comes from a community development financial institution called Boston Community Capital, which simply buys houses directly and resells to the borrower at an affordable rate. But both of these alternatives tend to assume existing occupants in the homes. Cities like Lake Worth, with its spate of abandoned properties, have a much bigger problem. It should theoretically be easy to attract residents back to the community; the county has a significant homeless problem (more than 2,000 school-age homeless children), and matching those individuals to available, affordable housing would make a lot of sense. But getting the trusts to relinquish the properties, getting them rehabbed, and getting them into the hands of people who choose to live there has proven too difficult so far.

“It doesn’t make me think any of this is going to get better,” Lynn Szymoniak says, wearily. “There’s just so much that needs to be done.”