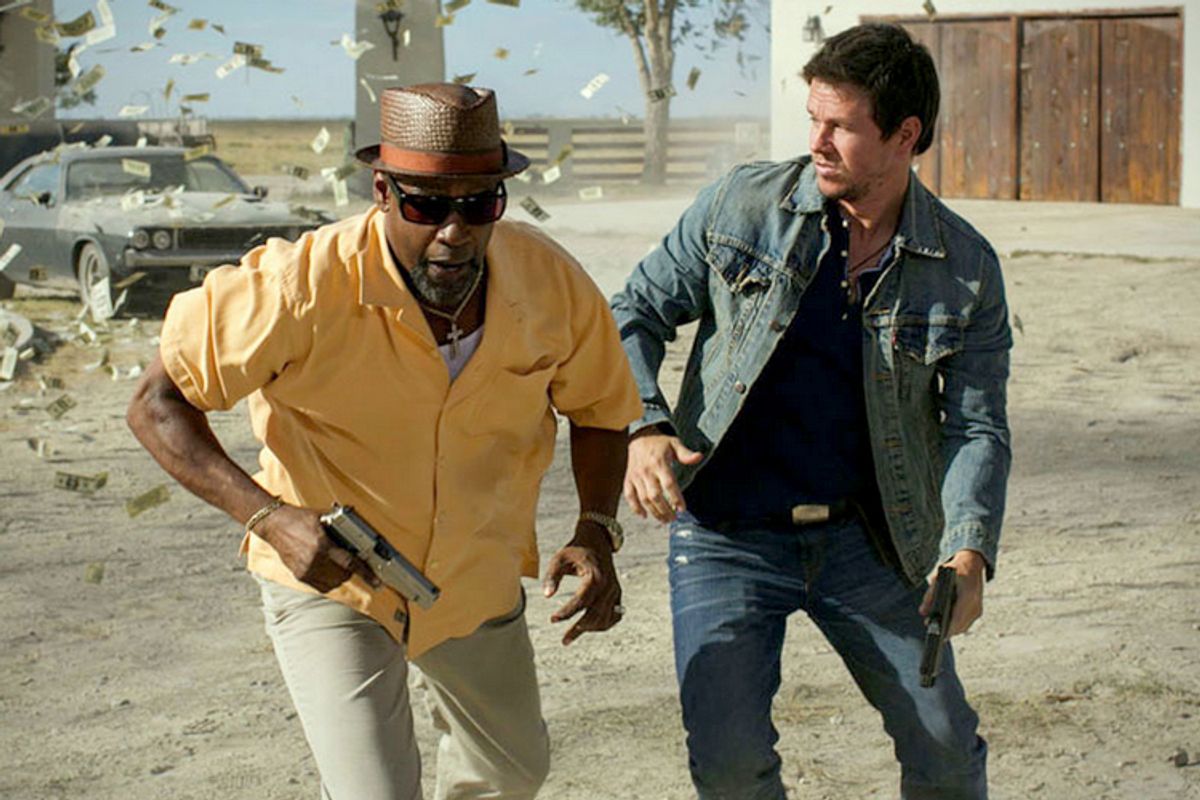 One of the great advantages of this job is that duty dragged me out of the house this week to go see “2 Guns,” an action movie starring Mark Wahlberg and Denzel Washington that is obviously a late-summer afterthought. I don’t think this movie’s an afterthought; I know it is, because it has two of Hollywood’s biggest male stars and probably cost well over $100 million to produce and market, and here it is being released in August, after all the summer’s big hits (and major flops) have come and gone. At some point, Universal Pictures bigwigs grasped that “2 Guns” would never be famous or memorable or launch a new salt-and-pepper action franchise in the “Lethal Weapon” vein, so now they’re hoping for one good weekend out of this sucker, along with the likelihood that international box office will nudge the whole thing into the black eventually.

I never would have gone to see this movie on my own initiative and my own $12. (Or even my own $6, at the charming second-run theater in upstate New York where “2 Guns” will no doubt end up in a couple of weeks.) But I’m here to tell you that, taken on its own moronic terms – which include helicopters crashing into a field (ka-whoppa-whoppa-whoppa boom!), homoerotic banter, egregious Mexican stereotypes and implausibly hot female DEA agents – “2 Guns” is both enjoyable trash and a fascinating snapshot of Hollywood’s current mentality when it comes to the United States government. I’ve written about this before (regarding the “Bourne” franchise, for instance), but the default setting in thrillers these days is that institutions formerly portrayed as heroic, like the military or the intelligence agencies, are evil, corrupt and pathologically nuts until and unless proven otherwise.

Sure, you can argue that “2 Guns” is an anomalous case, since it was adapted by screenwriter Blake Masters from a somewhat alt-flavored graphic novel by Steven Grant, and because director Baltasar Kormákur is an Icelandic art-house refugee who has been trying (and failing) to become an A-list Hollywood director for some years now and probably has crypto-Marxo-Muslim sympathies or whatever. It’s safe to say “2 Guns” will not be making the list of “wholesome family-friendly movies and inspiring movies with Christian faith and values” published every year by Hollywood evangelist Ted Baehr. (This year’s semi-desperate Ted Baehr fave-raves include “Despicable Me 2,” “Fast & Furious 6,” “which ends with a prayer to Jesus Christ,” and “The Conjuring,” in which the Salem witches are revealed to be real Satan-worshipers after all, 320 years later. To which I say: Whatever!)

My actual point is that in the wake of Abu Ghraib and waterboarding and Bradley Manning and Edward Snowden’s ever more alarming NSA revelations, even a mindless shoot-‘em-up like “2 Guns” has to have a completely cynical attitude toward power if it wants to seem even vaguely hip. I am now going to issue a spoiler on “2 Guns,” discussing a plot twist that is included in the trailers and the IMDB synopsis, and revealed within the first 20 minutes of the movie. Please don’t let that stop you from being outraged. You see, the two bank-robbing badasses in “2 Guns,” pork-pie-hat-wearing, gold-toothed Bobby (Washington) and flirtatious good-ol’-boy Stig (Wahlberg, manfully trying to twist his native Boston accent in a Lone Star direction), are both undercover agents, each unaware of the other’s true identity. Ha! You see where this is going, right? They’ve each been instructed to entrap the other guy in a big heist at a small-town Texas bank, which is supposed to yield a few million bucks belonging to a Mexican drug lord who is honest-to-Pete named Papi (Edward James Olmos, with a face like a gravel road and a wardrobe borrowed from Colonel Sanders).

Instead, Bobby and Stig, bickering the whole time in adorable ebony-and-ivory style, get away clean with a much, much larger pile of money that appears to belong to someone scarier than Papi. This was not the plan, or at least it wasn’t their plan. All Papi's going to do after you double-cross him is have you beheaded and dumped in the desert, which makes him seem positively snuggly next to the twitchy, unctuous super-spook played by Bill Paxton, who combines George W. Bush’s manner and Dick Cheney’s brain. Paxton single-handedly pushes the whole movie into low-budget, early-‘80s Walter Hill-John Milius territory -- among other things, by getting to say the line (to Olmos): "Your cock is massive. I'm in awe of your cock. But you're still a drug dealer and I'm still the United States government." It’s a role that could once have been filled by Powers Boothe or Michael Ironside, or for that matter by Fred Ward, who has a satisfying cameo here as a Navy admiral who absolutely, positively does not give a crap. Yes, Paxton is that good.

Add up all the gratuitous dead bodies and car chases and a supporting cast that includes Paxton, Olmos, Ward, James Marsden (as a psychopathic jarhead type) and the shameless eye candy of “Mission: Impossible – Ghost Protocol” star Paula Patton as a DEA agent who spends most of her screen time modeling intimate apparel, and this whole project feels like an expensive homage to the B movies of another era. To be slightly more precise, Kormákur is trying to split the difference between a macho action movie and a “macho action movie.” He wants to make a big hit with big stars and punk the studio with an anti-American satire. It doesn’t entirely work, which is no big surprise, but if you’re craving some irresponsible and amoral old-school August cinema, with no redeeming social value beyond the message that our government has gone insane and we’re all totally screwed, you won’t be let down.