Give Manning and Snowden the Nobel Peace Prize

If the Nobel committee had any guts, it would honor America's leakers and deliver a smackdown to the security state 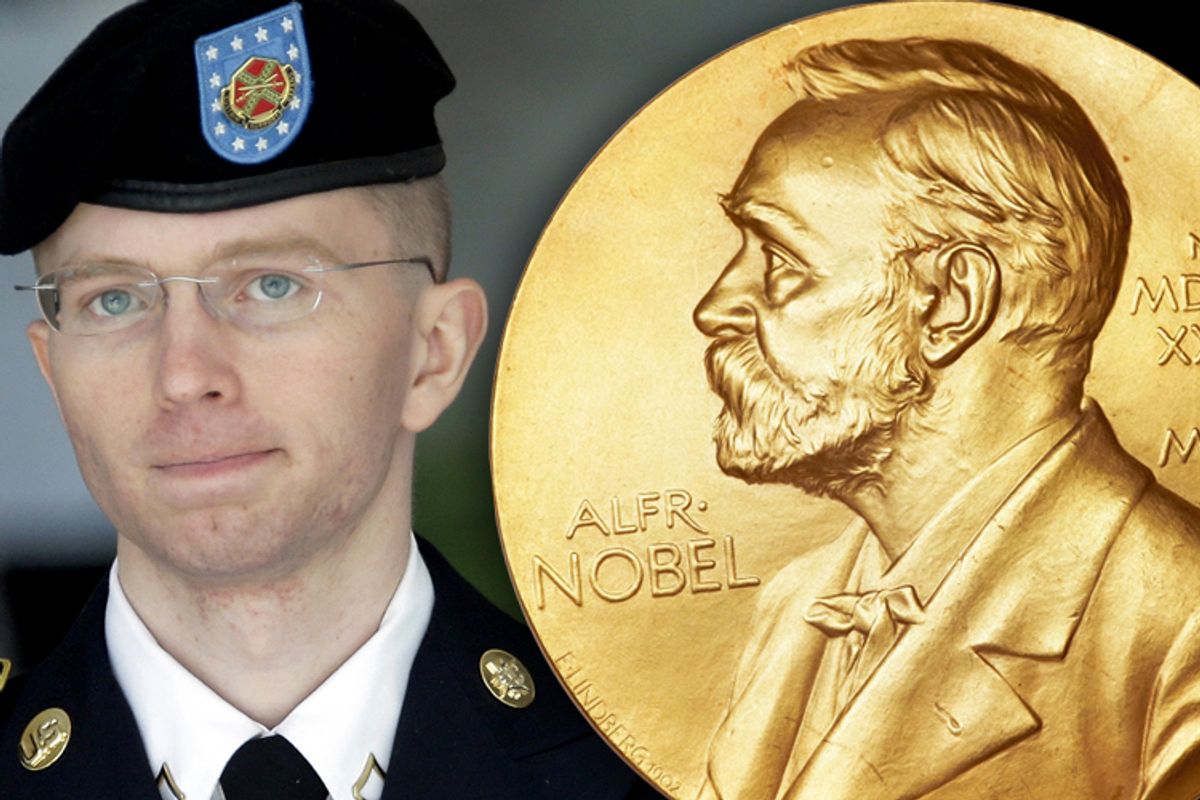 In an op-ed for the Guardian earlier this summer, Máiread Corrigan Maguire, an Irish activist who won the Nobel Peace Prize in 1976 and has devoted her life to working for peace in Northern Ireland and around the world, explained why she is nominating Bradley Manning for this year’s prize. American activist and journalist Norman Solomon followed up on this in a USA Today article this week, just after Manning’s conviction on espionage charges. Solomon announced that he will go to Oslo with a petition signed by more than 100,000 people urging the Nobel committee to award Manning the peace prize.

I think it’s a great idea, and if the Nobel committee weren’t so cautious and lily-livered – and were actually interested in furthering the cause of peace – it might actually happen. Since the real goal here is a worldwide public education campaign or an act of resistance, it might be even better if we folded in Swedish academic Stefan Svallfors’ nomination of Manning’s fellow leaker Edward Snowden, who was just granted temporary asylum in Russia. The Nobel committee could undo years of boring and/or insulting choices, just like that. Give the Nobel Peace Prize to Bradley Manning and Edward Snowden.

Can you even imagine how outraged, how red-faced and apoplectic, John McCain and Lindsey Graham and Dianne Feinstein and the talking heads on the Sunday news shows would be? It would partly make up for the profound shame of having given the prize to Henry Kissinger, one of the 20th century’s great war criminals, in 1973. And then there was what Svallfors calls the “hasty and ill-considered decision” to award it to Barack Obama in 2009. That seemed mysterious at the time – his great accomplishment was that he was a brand new American president who wasn’t George W. Bush – and it looks considerably worse now.

Manning is likely to spend much of his life in military prison, following his conviction earlier this week on numerous charges of espionage. (His acquittal on more serious charges of treason represented a faint gleam of sanity shining through the swampy murk of those proceedings.) One can make a persuasive case, as Joanne McNeil does in this moving article for Jacobin, that Manning has been tortured while in custody, partly to scare possible future leakers and whistle-blowers into conformity and partly because he appears to violate gender norms. Snowden, meanwhile, may spend much of his life in Russia, as a prize defector in the low-intensity Cold War reboot of the 2010s. I recognize that many Americans (and other people too, no doubt) remain genuinely uncertain about the morality of what these young men did and the reasons why they did it. It’s impossible for ordinary citizens to know for sure how much government secrecy is a matter of legitimate statecraft – the messy and morally compromised necessities of government – or exactly when and where it crosses into paranoid police-state nightmare.

How will historians of the future, if there is a future, judge this period, or the importance of the Manning and Snowden leaks? We can’t be sure, but that’s because history is written by the winners, and we don’t know who the winners will be right now. What I do know is that this is a key moment in American history, a moment of rupture and revelation. It’s a “whose side are you on?” moment, when the methods and goals of the governing elite and its media boosters – whatever political labels they may apply to themselves – are shown to be very different from their surface ideology, and to have little or nothing to do with “democracy.” It’s a moment when the convenient fiction that underlies all of American politics, the idea that the government represents the people, is exposed as a lie.

Manning and Snowden peeled back the curtain of empire and showed us its inner workings. Understandably, we didn’t much like what we saw, but the real question is what we're going to do about it. More specifically, they gave Americans a brief glimpse of our country as the rest of the world sees it, a boorish and blundering military-intelligence superpower so convinced of its moral superiority that it respects no universal human rights, no law and no authority except its own. That is so drastically at odds with most Americans’ self-perception of their homeland as the land of liberty and the Johnny Appleseed of democracy – the country of the Bill of Rights, the Gettysburg Address and “Ich bin ein Berliner” – that we’re in grave danger of shutting our eyes to it and retreating into comforting mythology.

You don’t have to believe that Manning and Snowden handled their lonely ethical dilemmas with perfect grace, or that every single document they leaked should have been released, to see that they opened a kind of Pandora’s box, unleashing a series of larger historical questions that feed on each other. Some of these are pretty basic, if not always easy to answer. Is transparency preferable to secrecy, in general, and who gets to decide? If the United States military has committed war crimes, or our government has decided to spy on the cell-phone conversations and Web-surfing habits of the entire world, do we have a right to know?

Then there’s the fact that the substance of Manning and Snowden’s revelations has permanently changed our perceptions of our own government. At least, it should have. Given the immense and unprecedented expansion of government secrecy, high-tech surveillance, clandestine intelligence operations, “extraordinary rendition” and “black sites,” extrajudicial killings and other forms of Voldemortian dark magic over the last two presidencies, why in God’s name should we trust anything these people do or anything they tell us?

Leading political figures from both parties, along with the mainstream commentators of the pundit class, are overtly and suspiciously eager to distract us from the actual contents of the Snowden-Manning leaks, and what they tell us about what America has become. Instead we are diverted toward the meta-details of their stories: What anti-social weirdos these guys are and what forms of punishment are too good for them and how sick you would get of the food-court chow in Sheremetyevo Airport after the first few days. (I actually never saw that story, but I sure wondered about it.) One big reason to nominate Manning and Snowden for the Nobel is to counterattack this information-age tendency of the news cycle to grind every story into trivia and low-grade “ironic” commentary. Whether you approve of them or not, these two aren’t just oddballs. They’re oddballs who revealed the secrets of the greatest military power in the history of the world, at enormous personal risk.

Here’s a handy guide to American politics: Anytime John McCain, Chuck Schumer and Jeffrey Toobin all try to convince you of something, you can be 100 percent sure you’re being bamboozled. Toobin, the New Yorker writer who presents as a moderate, mainstream legal scholar, has led the ideological charge in support of Manning’s conviction. He assures us that the right people are in charge of keeping secrets and that he, with his prep school-Harvard-Harvard Law pedigree, trusts those people a whole heck of a lot more than he trusts some kid from Oklahoma with a high school education. No, the nerd has to be locked away forever for the grievous crime of telling us the truth, although Toobin has always taken the judicious line that Manning should not be drawn and quartered or boiled in oil, as some “conservatives” would no doubt prefer. (I’ve had my disagreements with Glenn Greenwald from time to time but, holy crap, was it satisfying to see him deliver a righteous TV smackdown to Toobin a few days ago.)

McCain and Schumer, senators from nominally opposing parties, have tag-teamed to divert our attention from Snowden’s revelations about the vast and amazing scope of NSA spying, mostly by shamelessly trying to gin up public outrage over Russia’s refusal to do America’s bidding. “Russia has stabbed us in the back,” said Schumer, a New York Democrat and supposed liberal, “and each day that Mr. Snowden is allowed to roam free is another twist of the knife.” According to McCain, the Arizona Republican and 2008 presidential nominee, Russia’s decision to harbor Snowden is “a slap in the face of all Americans,” and it’s time to “fundamentally rethink” our relations with Vladimir Putin’s government.

That overheated rhetoric might be funny, if it didn’t also have a John Birch Society 1978 crazy-time victimology feeling about it. Strangely enough, senators, I don’t feel slapped in the face or stabbed in the back because one world power seized an opportunity to embarrass its biggest rival and make it look like an elephant scared of a mouse. If I had to guess, I would say that most Americans feel genuinely divided about Snowden, torn between patriotism and respect for law and order, an innate desire to root for the persecuted underdog, and genuine dismay or outrage over his NSA revelations. Very few of my fellow citizens want to start World War III because of an extradition scuffle over a hacker on the run. In fact, it’s only people like Schumer and McCain who are outraged, because what Snowden did threatens their governing ideology and their structure of power and privilege.

Many American commentators have gleefully noted the irony of a history-making whistle-blower gaining asylum from an authoritarian state where dissident journalists have been beaten, imprisoned, tortured and sometimes murdered. Russia has an undeniably poor record on press freedom, as do Ecuador and Venezuela, other nations that offered Snowden asylum. But while that’s certainly bad news for the Russian people, it’s ultimately another side issue meant to lure Americans away from the real story. Snowden is a hunted man with no valid passport who has the United States government after him, not a contestant in the Morality Olympics. He’s a refugee who’s trying to remain alive and at liberty as long as he can, and as the very documents he released have made clear, there are very few nations in the world that lie outside the global reach of the American military and the CIA.

In the real world, there’s almost no possibility that the Nobel committee will award the peace prize to Manning or Snowden, let alone to both together. In practice, the Nobel has functioned as an instrument of international foreign policy and NGO consensus, and has generally steered away from antagonizing major world powers. Last year the prize was awarded to the European Union for fostering six decades of “peace and reconciliation, democracy and human rights.” That would have been the most boring choice ever if it hadn’t seemed both lame and unintentionally hilarious, with numerous EU nations on the verge of fiscal collapse and the viability of the whole enterprise in question.

But there’s one obvious exception to the Nobel committee’s tendency to avoid controversy and confrontation. That would be China, whose human rights record has been directly attacked at least twice, with the selection of the Dalai Lama in 1989 and imprisoned activist Liu Xiaobo in 2010. You can’t precisely compare conditions in America and China, and I’m not saying that the widespread surveillance and secrecy that Manning and Snowden have exposed in the U.S., as frightening as it is, is the same as the forceful suppression of dissent and civil liberties in China. Or at least not yet. But the Nobel committee now has an opportunity to declare its independence, balance the scales a little on its most lamentable decisions, and make clear to Americans and the whole world that China isn’t the only superpower to go down the dark and dangerous road toward tyranny.