When will more politicians let go of God? 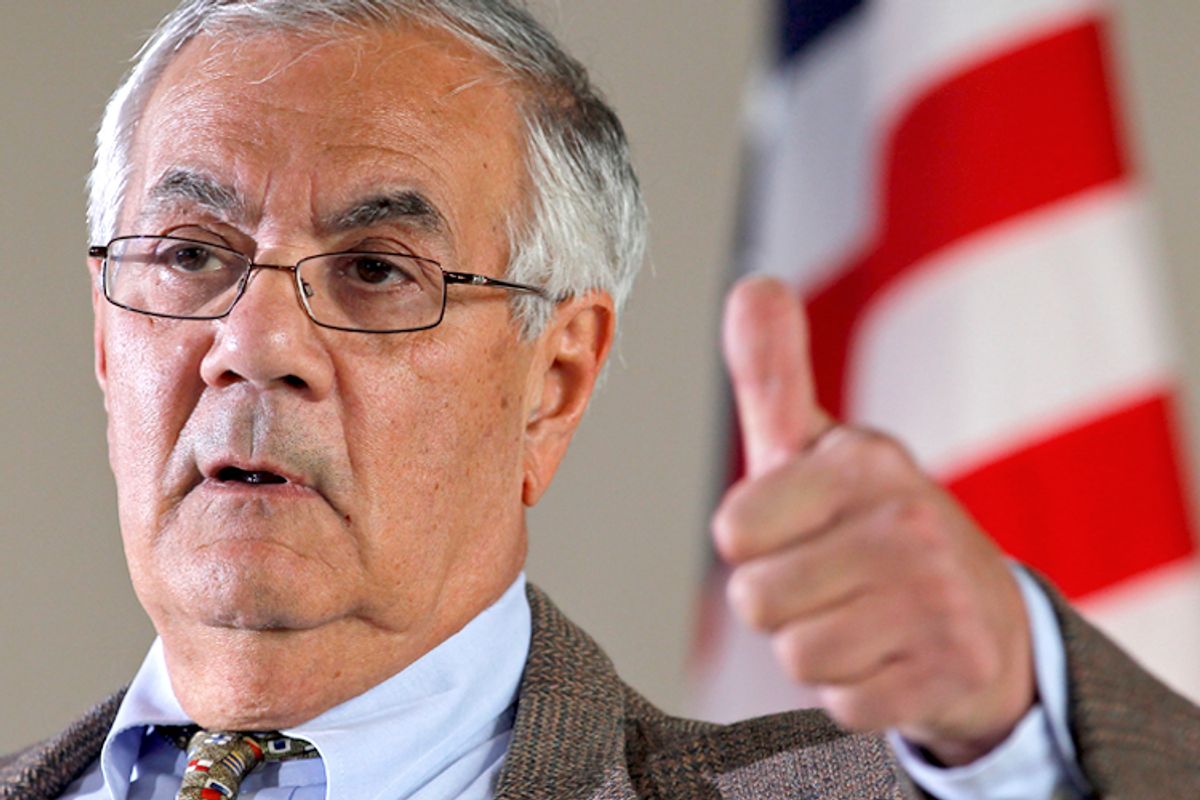 Barney Frank has always been a trailblazer. The outspoken 73-year-old former Democratic congressman first publicly came out of the closet back in 1987, back when being honest about your orientation was considered political suicide. And now, he's done it again. Though he has in the past described himself as "a left-handed gay Jew," over the weekend he refined that definition.

The updated status came via Bill Maher's "Real Time," after Maher asked Frank if he felt more liberated being out of Congress. "Absolutely," Frank replied. "I don't have to worry that when the phone rings it's somebody who's screwed something up and says it's my responsibility to unscrew it." Maher lobbed back that Frank had already enjoyed a degree of public immunity from criticism, noting, "You could come on this show and sit next to a pot-smoking atheist." Frank then waved a finger between the two of them and asked, "Which pot-smoking atheist were you talking about here?" to the cheers of the crowd. Frank went on to express his disappointment that he wasn't appointed to the open Senate seat in Massachusetts, because he "was looking forward to having my husband, Jim, hold the Constitution, not the Bible, and affirm, not swear, that I was going to be a wonderful senator."

Frank's admissions aren’t exactly bombshells. His tacit acknowledgment of some pot smoking, for example, should surprise no one familiar with his record of urging reform for the current drug laws. In the past, he and Ron Paul have teamed up to end the federal ban on marijuana and to respect Colorado's possession policy "because of our belief in individual freedom." And for a liberal politician who's represented Massachusetts to cop to atheism isn't quite the bombshell it would be if, say, Rick Santorum suddenly went all Christopher Hitchens.

Nevertheless, Frank's candor is yet another much-needed step in normalizing atheism in a country that still frequently takes the Judeo-Christian model as the default. It reminds people, and not just the uppity Bill Maher demographic either, that we don't all believe the same things. One-fifth of all Americans have no religious identity – and that number is even higher among young people. And in a nation that was founded on the ideal of separating church and state, on keeping God firmly out of government, why should a politician ever be asked to swear to anything on a Bible anyway?

With his persistent honesty, Barney Frank helped pave the way for a slew of LGBT political leaders who've risen up in the past several years. And for over 25 years, he served as a reminder that a leader is not necessarily a heterosexual Christian. Yet while a greater range of sexual orientation has gained political acceptance in the past few decades, atheism has traditionally proved considerably tougher for voters to accept. Though a Gallup poll last year encouragingly found that 54 percent of Americans would vote for a "well qualified" atheist candidate for president, it also noted they're still less likely to vote for atheists than any religious group, from Mormons to Muslims. Or, as Hemant Mehta described the continuing bias last year, "Atheists Are Still the Most Unelectable Group in America." Why, when so many voters are atheists themselves, does the squeamishness around atheist candidates persist?

That's why it mattered when Tempe, Ariz., state Rep. Juan Mendez responded to a request to deliver a prayer at a House session last spring by speaking of his "secular humanist tradition" and offering the hope of "a new era in which Arizona’s non-believers can feel as welcome and valued here as believers." That's why it matters when Rep. Kyrsten Sinema describes herself as embracing "a secular approach" and Sen. Tammy Baldwin calls herself "unaffiliated." All of these things challenge the frankly terrifying voter expectation that an elected official is supposed to be some God-fearing enforcer of a biblical interpretation of the Constitution. Frank's admission that he's just another gay, pot-smoking atheist acknowledges that this is what an American looks like too, and there are plenty more of them out there in this great land of ours. And it says that you can serve your country just fine without God as your running mate.