The worst shirts for girls

Children's Place pulls a sexist shirt, but it's just one of many 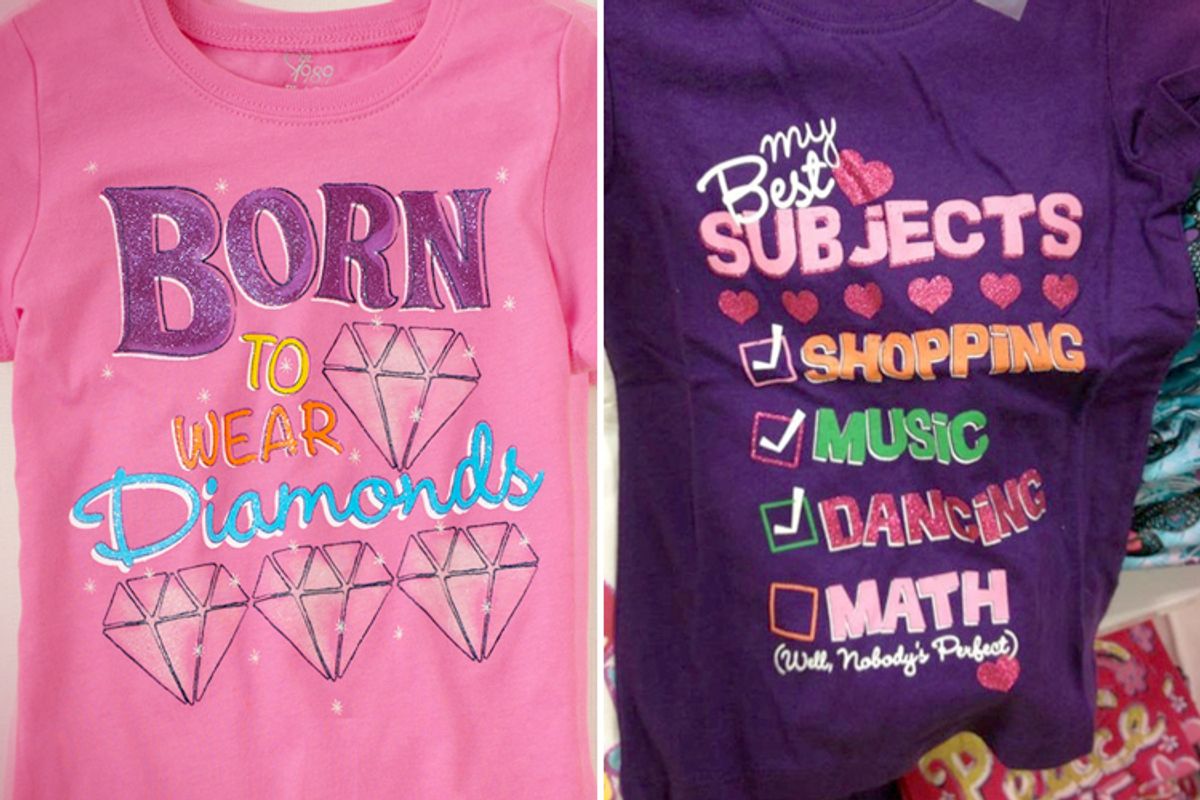 As August brings the long, slow wallet drain that is back-to-school shopping, here's a quick consumer tip: Don't give your money to retailers who perpetuate dumb, antiquated notions about gender.

Earlier this week, the Children's Place was called out on Facebook for a girl's tee that featured a list of "My best subjects." Checked off were "Shopping, Music, Dance," but "Math" remained unchecked because "Nobody's perfect!" Certainly not girls! As a patron noted, "Wake up, girls have no problem with math or shopping. Figure that out!" Another said she'd already been "really disgusted by the sexist approach to girls' clothing," including a "This princess is no drama queen," shirt, but it was this one that really took the cake.

After getting picked up on several blogs and attracting a wave of attention in Jezebel and Consumerist, Children's Place did swift damage control, issuing a statement saying, "We take feedback from our customers very seriously. It has come to our attention that some of you view our Best Subjects T shirt as insensitive towards girls and women. This was not our intent. There are countless women in all walks of life who excel in math, including our very own CEO. We have pulled this product from our stores and we want to express our apologies to anyone we may have offended."

So, thanks, I guess, for the condescending affirmation that your "very own CEO" is good at math, Children's Place. There's no doubt that being responsive to criticism, apologizing to the "some of you" who "may have" been offended and withdrawing the dumb shirt from circulation are all good ideas. But it takes more than simply hustling one item off the shelves to effect true change.

The messages we send our children from the day they are born influence how they view themselves and the world. And if we clad our girls in messages that they are spoiled and divas and princesses and not that they are smart and brave, how can we not think that's going to have an impact? Two years ago, Gymboree stirred up a hornet's nest by offering onesies that declared baby boys were "Smart Like Dad," while girls were "Pretty Like Mommy." Meanwhile, JC Penney offered a girl's shirt that announced, "I’m too pretty to do my homework so my brother has to do it for me." Earlier this year, Disney attempted to give "Brave's" accomplished, normal-looking Merida a wide-eyed, slim-waisted makeover. Around the same time, HuffPo pointed out that Disney sells a boys' Marvel shirt encouraging them to "Be a Hero." Though princess-palooza Disney offers no Marvel hero apparel for girls (seriously, zero), young female Marvel fans can pick up their own damsel-in-distress "I need a hero" shirts elsewhere. And until they were shamed right out of rethinking their internal real estate, the British retail chain Boots was recently stocking its Science Museum brand experiment kits exclusively in the "Boy" toy section of its stores. Between that and the Children's Place thing, you'd get the impression that the main qualification for math and science is a penis.

Removing a single shirt is a positive action, but it's only one small one. Children's Place still cheerfully shills a girl's to-do list shirt that puts "shopping" first -- above laughing, dancing and music. It offers shirts that announce the wearer is "born for diamonds" and "all about glitter." (Boys, meanwhile, get to be a "superhero" and "undefeated.") Gymboree sells a girl "Report card" shirt that lists her accomplishments as "being awesome" and "cuteness" – and then further down the list being "smart and funny."

Nobody's saying a girl can't be cute and like diamonds and glitter. Trust me, I have two daughters and an incredibly glitter-friendly household. But what's needed is considerably more conscious, consistent effort on the part of retailers – and, God knows, consumers – to not put our kids in narrow, shallow boxes. Think it can't be done? It has. It can be. Our kids deserve better than the limiting, dumb narrative that boys are heroic and girls are shoppers. And when we send them back to school with messages on their chests, let that message be something smarter than some outdated, unhelpful crap.