Pick of the week: Matt Damon fights for the 99 percent

Pick of the week: Neill Blomkamp's ambitious sci-fi allegory "Elysium" is an intriguing follow-up to "District 9" 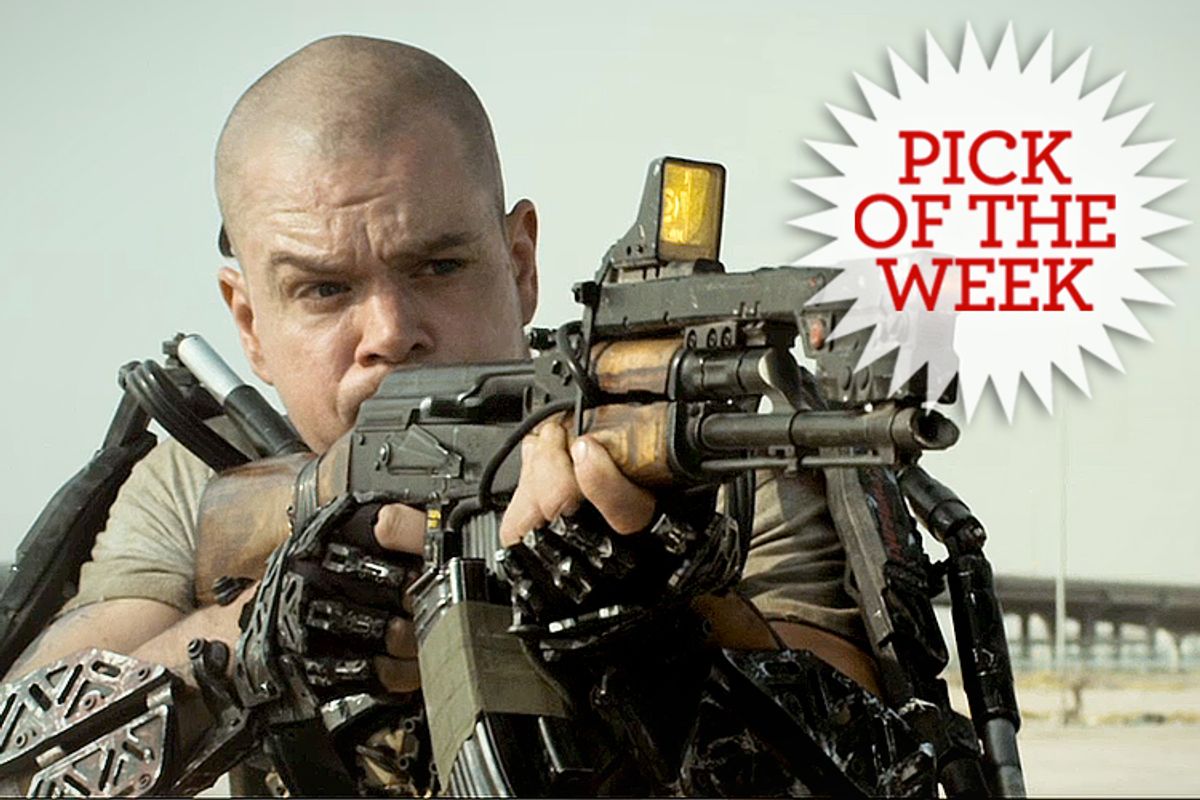 For at least half its running time, writer-director Neill Blomkamp’s “Elysium” is such an exciting, witty and vividly realized science-fiction allegory that I felt sure it would end up as one of the year’s best movies. By the third act, I’m sorry to report, you can feel the studio dollars directing the film, and the whole thing degenerates into the utterly generic chase-and-shoot conclusion that audiences are believed to want. (Maybe they do want it, who am I to say? Critics are, almost by definition, specialists who crave the original and unusual, while paying moviegoers tend to prefer variations on a familiar theme.) But even with that major caveat, “Elysium” is a highlight of the summer, and makes clear that Blomkamp is a genuine visionary who’s trying to push the envelope of possibility in mainstream popcorn cinema.

Like Blomkamp’s explosive debut “District 9,” which staged a caste conflict between humans and aliens in the filmmaker’s racially divided hometown of Johannesburg, “Elysium” barely pretends to be about the future rather than the present. It’s the middle of the 22nd century and Matt Damon’s character, Max, is a white kid who’s grown up in the Spanish-speaking barrio of Los Angeles – and, more important, on a poisoned, sickly and impoverished planet where slum conditions are general. The wilderness and wildlife we claim to cherish today are long gone, and while much of the human population has apparently died off, those who remain are something like a permanent helot underclass. Max is lucky enough to have a job, risking radiation exposure every day in a factory that assembles the police robots that brutally enforce law and order, under a thin veneer of official politeness. That’s a particularly nice touch in Blomkamp’s screenplay: Even the technocratic, bureaucratic and completely alienated state apparatus of this dystopian society still pretends to care about the individual.

And then there’s Elysium, a gated community in the sky, where the affluent 1 percent (or even less than that) have retreated. It’s a beautiful landscaped suburb, partly gracious American country living and partly south of France, enclosed on a big torus-shaped satellite with artificial gravity. If Elysium carries the geographical separation of rich and poor that’s so much a part of our world to new heights, it also has a near-metaphysical significance: Elysium is a man-made simulacrum of the paradise promised by religion, in which no one ever dies or grows old, thanks to medical technology that can heal any disease or injury. That technology is not available, needless to say, in the overcrowded L.A. hospital where Max’s childhood girlfriend Frey (Alice Braga) works, and coyotes who promise to smuggle sick or dying earthlings to Elysium for clandestine treatment do a booming business. I would half-seriously suggest, in fact, that you can read "Elysium" as a retelling of Milton's "Paradise Lost" with Damon in the heroic role of Satan -- but let's leave that one for the grad students.

Under the command of elegant, French-speaking military commander Delacourt (Jodie Foster doing her highly convincing upper-crust thing), Elysium defends itself vigorously against incursions by undocumented migrants. Most of the rattletrap spacecraft sent up by Spider, an L.A. crime lord played by Brazilian star Wagner Moura, are shot down en route, killing all the men, women and children on board. Elysium’s civilian president (Faran Tahir) doesn’t approve of Delacourt’s brutal tactics, either because he’s troubled on a human level or simply because it’s bad P.R. So Delacourt, aided by a double-dealing robot-arms manufacturer named Carlyle (William Fichtner, quite possibly my favorite living American actor, his deadpan comic-evil delivery peerless as usual), plots to seize the reins of power for herself. That’s about when Max, a longtime criminal who’s been trying to go straight and win back Frey, takes a lethal dose of radiation in Carlyle’s factory. He has five days to find his way to Elysium or die.

That’s a heck of a lot of plot to get in the way of the story, as my mentor Joe Bob Briggs used to put it in the '80s. Furthermore, if you think that setup sounds generally similar to any number of other dystopian sci-fi movies, from the “Logan’s Run” and “Soylent Green” era on up through “Robocop” and both versions of “Total Recall” (not to mention Ari Folman’s unreleased “The Congress,” which I saw at Cannes this year), you’d be right. But as with “District 9,” the genius of Blomkamp’s filmmaking lies in the details, from the dusty, desperate shantytown feeling of life on Earth to the attempt to pretend that a worldwide failed state is still functioning. Max’s visit to the parole office is like a trip to a big-city DMV, with the same numbered tickets, light-up displays and multiple-hour waits, and his probation officer turns out to be a graffiti-scrawled robot visage with chipped paint and a disturbing resemblance to Bob’s Big Boy. It can understand tone of voice, eventually: “Are you being sarcastic?” it asks him, and then, “Would you like to speak to a human?” No, he would not.

Max’s plan is to kidnap Carlyle, download the valuable information loaded in his brain, and swap that info to Spider for a gypsy-cab ride to Elysium. Neither of them knows that Carlyle’s noggin holds the code for an entire “reboot” of Elysium that would transform Foster’s icy Homeland Security spook into its supreme leader -- and make conditions on Earth even worse. Yeah, we’re talking MacGuffin, and from this point forward “Elysium” gets a lot less specific and a lot less interesting. Delacourt calls in her ruthless special-ops agent, Kruger (South African actor Sharlto Copley, Blomkamp’s longtime pal and collaborator), and he and Max – outfitted with cyborg-like metal exoskeletons – spend the rest of the movie whomping each other like battle-bots and blowing stuff up with high-powered weapons.

Actually, the action sequences in “Elysium” are well choreographed and fun to watch; if they go on too long for my taste, we’re not talking about anything like the degree of overkill found in the endless, weightless locomotive-pitching scenes of “Man of Steel.” There’s masterful cinematography throughout by Trent Opaloch, and Philip Ivey’s production design may be the best work found in any big-budget fantasy this summer. Blomkamp even throws in a “Matrix”-like plot twist (or two) at the end that may take you by surprise. If “Elysium” isn’t the post-millennial sci-fi masterpiece I was hoping for, it has tremendous resonance and is pretty doggone good for its category. It further underscores the fact that Blomkamp is an immensely talented pop auteur with ambitious populist-democratic politics, who wants to make movies for the masses that push just beyond the self-congratulatory comfort zone of Hollywood.