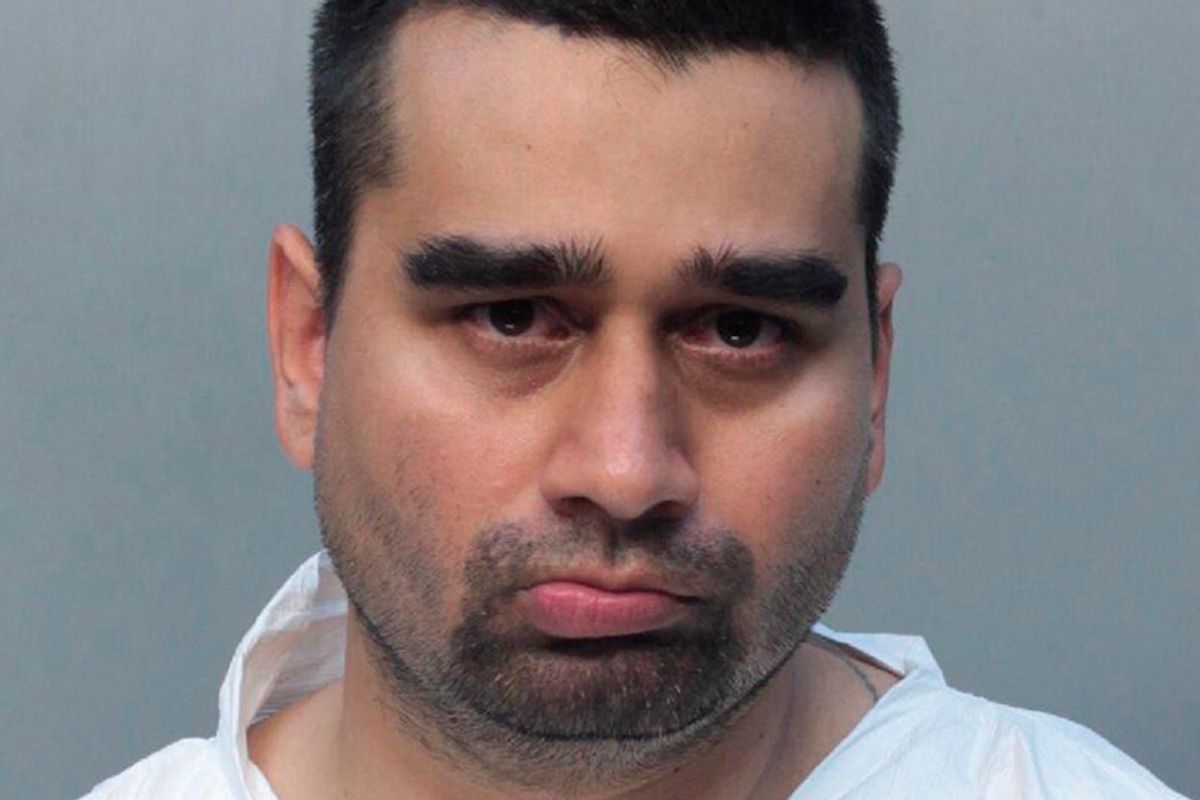 On Thursday, Miami resident Derek Medina wrote a chilling message on his Facebook page. In a grim, rambling post, he declared, "Im going to prison or death sentence for killing my wife love you guys miss you guys takecare Facebook people you will see me in the news," he wrote. "My wife was punching me and I am not going to stand anymore with the abuse so I did what I did I hope u understand me." (sic) He added a photograph of a bloodied, apparently lifeless figure contorted in a corner of the kitchen floor with the caption, "Rip Jennifer Alfonso." Then he walked into the South Miami police station and told investigators that his wife had been shot to death. Medina's 10-year-old daughter from a previous relationship was reportedly upstairs in the house during the crime, but was found unharmed later. Medina is now charged with first-degree murder.

In the wake of a sensational crime, the accused's social media trail can be a grim bonanza for both news media and armchair rubberneckers -- and that raises unique ethical issues. Though police have taken down Medina's Facebook page, should you have the time or the curiosity, you can still find plenty of his online life elsewhere. You can check out his self-published e-books, with titles like "How I Saved Someone's Life and Marriage and Family Problems Thru Communication" and "Humans Who Are Gifted and Can See the Supernatural Spirit Ghost World We Live in Called Ghost Haunted Adventures," in which he describes his own "experiences ghost hunting." You can find his Twitter stream, although there's not much there. You can find his YouTube channel, including videos of him ferociously practicing his kickboxing just a few days ago, and singing along with Bill Withers to "Ain't No Sunshine" in his car last month.  And if you want to see the image of his dead wife Jennifer Alfonso, you can find that too.

In reporting the story, the local Miami CBS affiliate announced it would not air the photo "out of respect" for the family. The Daily News similarly ran an image of Medina's Facebook post with the photograph itself heavily blurred out. But Gossip Extra had no compunction about posting it. And BuzzFeed's Tasneem Nashrulla, in typical BuzzFeed breezy, bullet-pointed style, ran a blow-by-blow account of the story -- with the full, unedited photograph. The site later cropped the photo to show just Alfonso's knees, with the caption "The graphic photo showed a woman bent over backwards with her knees bent, her face and arm covered in blood." Because that's so buzzy. On Thursday, Policymic called BuzzFeed's editorial choice "an all-time low." BuzzFeed readers, meanwhile, have been busily ranking the crime in familiar categories of "trashy," "Fail," "OMG" and "WTF."

Medina now joins a long line of individuals who've used Facebook to reveal something shocking. Three years ago, Rutgers student Tyler Clementi posted his suicide message there before jumping off the George Washington Bridge.  In February, Ashley Anne Riggitano posted her final message on Facebook before killing herself off the same bridge. And this past spring, three Chicago area teens were accused of raping a 12-year-old girl – and posting a video of the assault on Facebook.

There are a variety of reasons for an individual to bring a gruesome confession to a wide circle -- a desperate last need for connection, a sick form of bragging. That someone would make that strange, awful choice is newsworthy. But sharing the image of it is pure callous sensationalism. Whatever drove Derek Medina to post what he did, he certainly got the attention he wanted for it. Horribly, the Daily News image of his Facebook post shows that the unaltered photograph of the dead Alfonso was shared at least 53 times. And the BuzzFeed story shows Medina's confession as having 123 shares. In a matter of hours, Alfonso's death went viral. Thanks to Medina's friend list first -- but then later to the smug, unstoppable power of BuzzFeed, her murder has been passed around like a George Takei joke, a "WTF?" that yesterday was a human life.