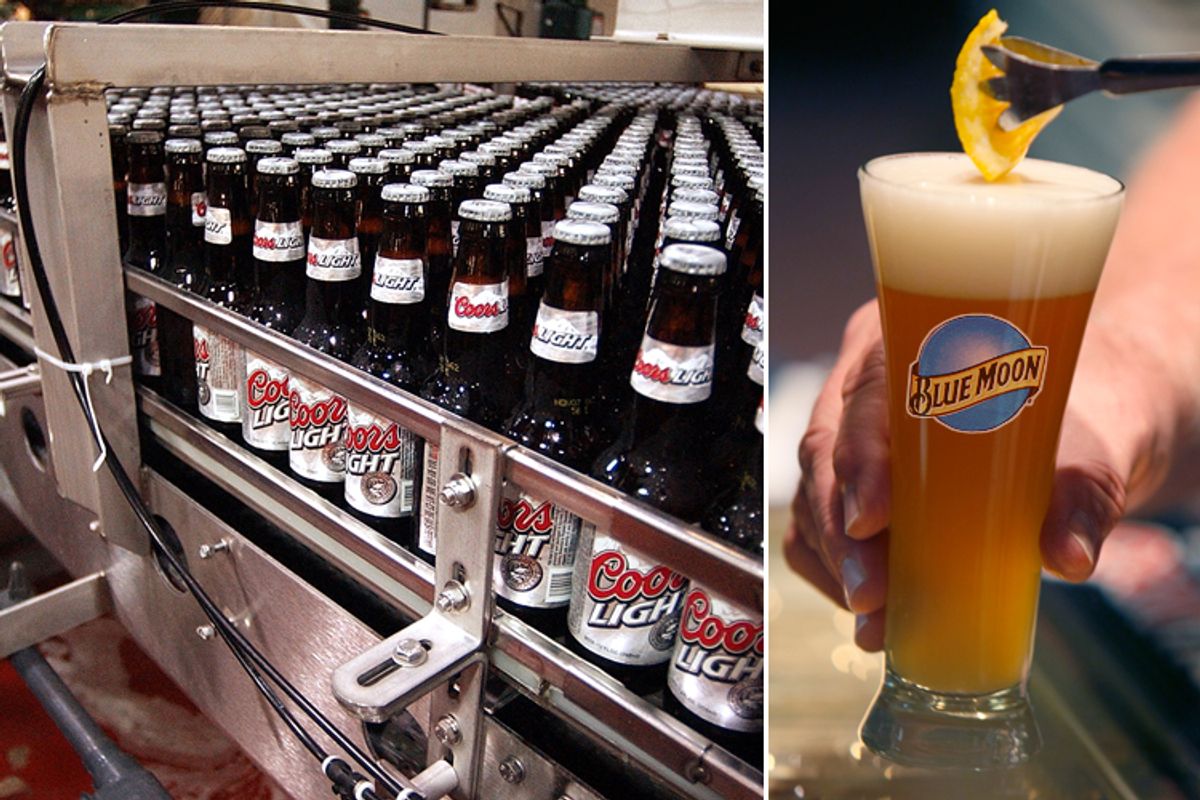 MillerCoors, the company behind Coors, Miller High Life and Miller 64, wants a little respect for its other, this-one-isn’t-like-the-others stepchild, Blue Moon. Perhaps in a nod to Coors’ frat-boy consumer base, the company message was summed up perfectly in a recent Bloomberg headline: "Blue Moon tells beer snobs to drink up and show respect." It’s the kind of line you can imagine a frat brother telling an inductee, right before shoving a beer bong in his mouth and pouring cans of Coors Light into the funnel at the top.

Back in December 2012, the Brewers Association released new standards for breweries to call themselves makers of “craft” beer. They had to be “small,” making no more than 6 million barrels of beer per year; “independent,” meaning that no more than 25 percent of the company is owned by a non-craft beverage industry members; and they had to make beer that qualifies as “traditional,” meaning that it relies on malted barley and not what brewers consider filler ingredients, like corn and rice.

This definition did not suit MillerCoors, whose CEO Tom Long wrote an Op-Ed on CNN in response. “Based on our size,” he wrote, “that definition excluded us, even though we brew some of the most popular craft beers in the marketplace.” Except that they don’t, because Blue Moon is, by definition, not a craft beer – not just because of MillerCoors’ size (it sells 67 billion barrels of beer, compared to the largest craft brewer, Sam Adams, which sells about 2.7 million per year), but also because its so-called craft brand is not independent, as the definition requires. It’s owned by MillerCoors. Ipso facto, not a craft beer.

The craft beer market grew 15 percent in 2012, pulling in more than $10.2 billion. Comparing that rate of growth to the American beer market as a whole, which saw only a 1 percent increase, it’s fairly obvious why MillerCoors wants the world to recognize its Blue Moon brand as “craft”: money. This long-brewing debate has stoked the passions of beer lovers on both sides, with plenty of brewers opposing Blue Moon’s assertions, and some voicing their support. (Daniel Del Grande, founder of Bison Brewing Co. and an adamant beer advocate, told me, “Size doesn’t matter,” and counts Blue Moon as craft.) Long answers the beer’s detractors with a taunt directed at actual craft brewers, “Being small and unpopular, what’s the utility in that?” (There’s a lot of utility in that, actually: According to the Guardian, the environmental impact of a MillerCoors beer is three times as large as the impact of an ale brewed at the pub where it’s served.)

But if you’re a woman, a minority, a union member, an environmentalist or basically anything other than a rich white man with boring taste in beer, then Blue Moon’s non-craft status is one of the last reasons to forgo it – and any other MillerCoors product (here’s the full lineup) – in favor of an actual craft brew.

For one, there’s its marketing: Except when it’s defending Blue Moon’s craft stature, MillerCoors seems to go out of its way to keep their relationship a secret. Nowhere on Blue Moon’s packaging or website will you see any mention of the fact that it’s a MillerCoors brand. It specifically avoids making that connection, practically going out of its way to keep consumers in the dark. For example, according to its website, the company proclaims that “brewing is an art” and lists Keith Villa as its founder; but it neglects to mention that Peter Coors and the MillerCoors company are the patrons, bankrolling not just Villa’s formative trip to Belgium, but the whole company.

These marketing gambits, though, are just the beginning of the reasons why MillerCoors – and by extension Blue Moon – is a company to avoid. Unlike true craft brewers, many of whom have a deep commitment to their employees, their communities and the environment, members of the Coors family have been accused of fighting against the interests of their own workers, women, minorities and the environment for decades.

Announcing the end of a 10-year boycott against Adolph Coors Co. in 1988, the L.A. Times called the company “one of the nation’s most virulently anti-union companies,” noting that despite a recent deal with laborers, it was reasonable to suspect that the company was “using the National Labor Relations Board to keep the union out, just as any anti-union company might do.” In 2003, the American Federation of Labor and Congress of Industrial Organizations again called for a boycott to protest the company’s “anti-worker, union busting” practices. And just this week, Molson Coors’ U.K. employees used a strike to force the company to revise plans for pay cuts and shift changes that according to a labor representative, “originally saw some workers face losing their homes.”

When it comes to women’s reproductive rights, both Pete and Joe Coors have (unsuccessfully) run for political office on platforms that would deny women bodily autonomy. In his bid for Senate in 2004, Pete touted his antiabortion stance. And to prove to voters how passionate he was about limiting women’s rights, he committed to changing the Coors Co. health plans so that abortion coverage would be removed. Pete also funneled money into groups like the Independent Women’s Foundation, an organization “so extreme,” that as Salon reported back in 2004, “its leaders opposed the landmark Violence Against Women Act, complaining that such federal protections encourage women to ‘distrust’ men.” But Pete isn’t the only Coors looking to trample on women’s bodily rights in his attempted ascent into politics. Despite later backing away from his earlier support for the measure, Joe Coors Jr., who lost his 2012 congressional bid, was a financial backer of the “personhood” campaign in 2010, which would have banned almost all abortions, even in cases of incest and rape. ProgressNow Colorado even likened Joe to Todd “legitimate rape” Akin.

The Coors family's minority relations track record is similarly dismal. Coors has established a bit of a pattern in its dealings with non-white, non-heterosexual communities: Allegations of discrimination are made, usually through a lawsuit or a boycott, Coors gets bad press and responds with hefty monetary donations. The planned 1984 NAACP boycott, for example, resulted in a $325 million commitment by Adolph Coors Co. to recruit, hire and promote more black employees. Not everyone, however, accepts the company’s mea culpas: LGBT political group Human Rights Campaign turned down a $5,000 donation from Coors Brewing Co. in 2000 because of its support for organizations like the anti-marriage equality Heritage Foundation.

And then there’s the company's relationship with the environment. Oh Coors, you are so good at pretending to care. Efforts like cutting water usage and waste, developing sustainable packaging and lowering emissions are all very noble, sure. But let’s not forget that this is the same company that the EPA accused of leaking “cancer-causing agents” into groundwater in the '80s, that was fined $1.05 million for violations of Colorado air pollution laws in 1993, and that dumped 77,000 gallons of beer into in Colorado’s Clear Creek in 2001, killing more than 50,000 fish. Through it all Coors continues to pump money into anti-environmental protection think tanks like Heritage, the American Enterprise Institute, the Cato Institute and the Independent Institute, as well as legal organizations like the Landmark Legal Foundation and the Pacific Legal Foundation, dedicated to litigating against environmental regulations.

So is Blue Moon a craft beer? I don’t think so. But that’s just the first reason not to buy it.