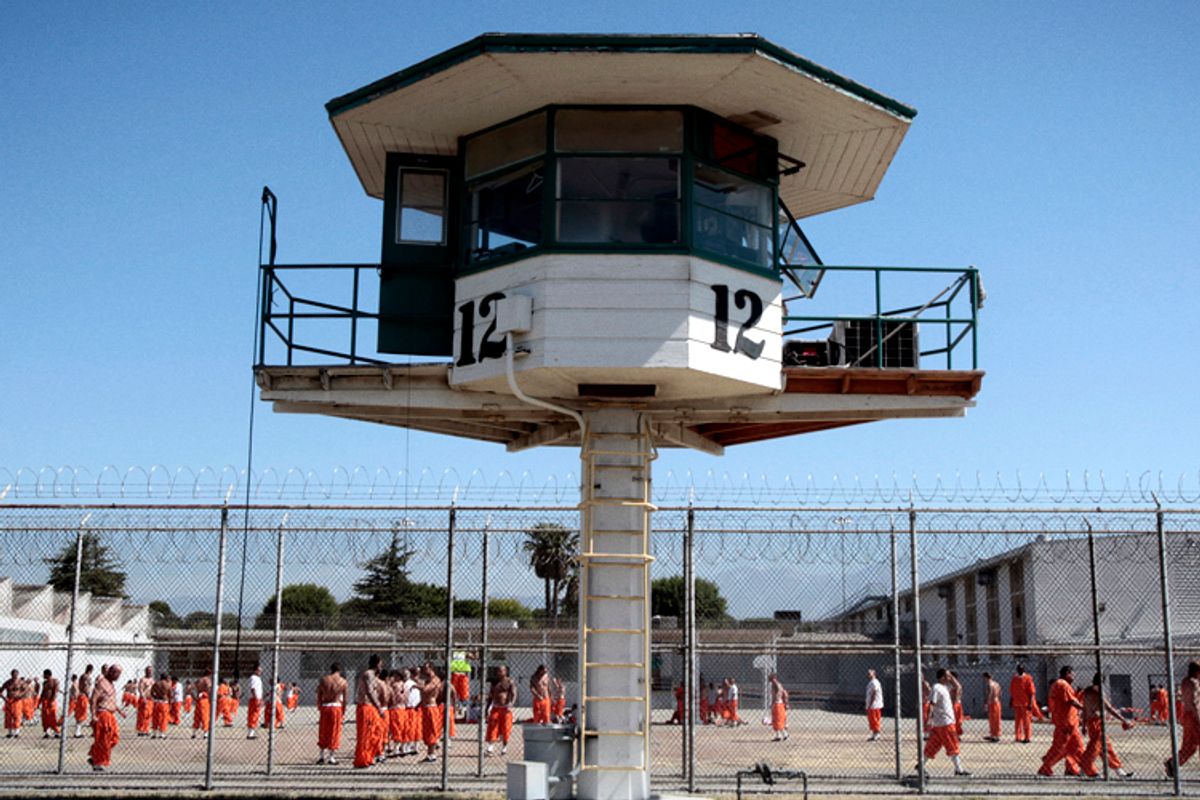 So the paranoid hippie pot dealer you knew in college was right all along: The feds really were after him. In the latest post-Snowden bombshell about the extent and consequences of government spying, we learned from Reuters reporters this week that a secret branch of the DEA called the Special Operations Division – so secret that nearly everything about it is classified, including the size of its budget and the location of its office -- has been using the immense pools of data collected by the NSA, CIA, FBI and other intelligence agencies to go after American citizens for ordinary drug crimes. Law enforcement agencies, meanwhile, have been coached to conceal the existence of the program and the source of the information by creating what’s called a “parallel construction,” a fake or misleading trail of evidence. So no one in the court system – not the defendant or the defense attorney, not even the prosecutor or the judge – can ever trace the case back to its true origins.

On one hand, we all knew more revelations were coming, and the idea that the government would go after drug suspects with the same dubious extrajudicial methods used to pursue terrorism suspects is a classic and not terribly surprising example of mission creep. Both groups have been held up as bogeymen for years, in order to scare the public into accepting ever nastier and more repressive laws. This gives government officials another chance to talk to us in their stern grown-up voices about how this isn’t civics class, and sometimes they have to bend the rules to catch Really Bad People.

On the other hand, this is a genuinely sinister turn of events with a whiff of science-fiction nightmare, one that has sounded loud alarm bells for many people in the mainstream legal world. Nancy Gertner, a Harvard Law professor who spent 18 years as a federal judge and cannot be accused of being a radical, told Reuters she finds the DEA story more troubling than anything in Edward Snowden’s NSA leaks. It’s the first clear evidence that the “special rules” and disregard for constitutional law that have characterized the hunt for so-called terrorists have crept into the domestic criminal justice system on a significant scale. “It sounds like they are phonying up investigations,” she said. Maybe this is how a police state comes to America: Not with a bang, but with a parallel construction.

At this point, there are a lot more questions than answers about what Electronic Frontier Foundation attorney Hanni Fakhoury has dubbed the DEA’s “intelligence laundering” operation. Here are three big ones: How far does all this go? Where does it stop? And why doesn’t the general public seem to give a damn? That last question partly reflects the fact that the NSA has evidently been tracking everybody’s cell phone calls and emails, and that sounds scary. It's easy for many middle-class Americans to convince themselves that they have nothing to fear from the DEA, even if it has morphed into a dark secret-police force we're barely aware of. As revolutionary and noted hypocrite Thomas Jefferson once observed, the spread of tyranny only requires our silence.

Millions of people have been sent to prison on drug-war convictions over the last 20 years. Most of those people have been poor and black. We will never know how many of those cases resulted from secret evidence collected by spy agencies, but it might not be a small number. One of the Reuters articles that broke this story quotes DEA officials as saying that the “parallel construction” tactic had been used by the agency “virtually every day since the 1990s.” Legal scholar Michelle Alexander, author of the recent bestseller “The New Jim Crow: Mass Incarceration in the Age of Colorblindness,” sent me an email from her family vacation to say that these revelations “certainly lead one reasonably to wonder how many people -- especially poor people of color, who have been the primary targets in the drug war -- have been spied on by the DEA in the name of national security.”

From the outset, there have been moral, philosophical and technological connections between the war on drugs and the war on terror. Both campaigns involve the unprecedented expansion of executive power and the use of high-tech paramilitary policing. Both involve “adjusting” our supposedly cherished constitutional rights and privileges in the name of protecting us from evil. Both involve targets that are easy to demonize and marginalize, and both embody troubling questions about race, class and power. Most important of all, both conflicts are immensely expensive and shockingly self-destructive. If these parallel wars had been designed to fail – designed to create a state of permanent crisis, empower and enrich a caste of warrior-bureaucrats and undercut constitutional democracy – they could hardly have been designed more perfectly.

In the recent documentary “How to Make Money Selling Drugs,” David Simon of “The Wire” and “Treme” describes the United States as a society that “hunts down and incarcerates poor people.” Michelle Alexander’s book depicts the mass imprisonment of African Americans as a new system of racial control that is more efficient than the old one precisely because it is veiled by official colorblindness. As investigative journalist Jeremy Scahill and others have documented, the borderless global war against al-Qaida has only widened and deepened mistrust of America all over the Arab and Muslim world, by too often resembling an indiscriminate campaign of murder and torture against civilians. Anwar al-Awlaki was a moderate Virginia imam who once gave a speech at the Pentagon, and was driven to the other side by his perception that the U.S. was waging war on Islam.

Now we can see that these two arms of the national-security octopus are intertwined as well. As John Shiffman, David Ingram and Kristina Cooke of Reuters reported in a series of articles over the past week, the DEA's Special Operations Division – originally created in 1994 to battle Latin American drug cartels – routinely funnels “information from intelligence intercepts, wiretaps, informants and a massive database of telephone records to authorities across the nation to help them launch criminal investigations of Americans.” We’re talking about data collected by all the clandestine but theoretically legal means that Edward Snowden’s leaks have told us about, data gathered in the name of combating terrorism that ends up being used for entirely different purposes. These are ordinary drug prosecutions with no links to terrorism or other national security issues, but in which the information that led to the original arrest is treated as a state secret.

Documents uncovered by Reuters specifically instruct federal agents and local police to “omit the SOD's involvement from investigative reports, affidavits, discussions with prosecutors and courtroom testimony.” Instead, cops and agents are told to “recreate the investigative trail” to make it look like regular police work. This is “parallel construction,” a marvelous and terrifying bureaucratic neologism that in plain English appears to mean lying. For instance, it might mean claiming that a traffic stop that led to a drug bust stemmed from a broken taillight or an illegal left turn, rather than an NSA intercept, an overseas wiretap or a CIA informant.

Fakhoury’s recent post on the EFF's DeepLinks blog explores various ways that these deliberate deceptions appear to violate the Fifth and Sixth Amendments, and undercut the crucial role of legal scrutiny entrusted to the courts. They prevent judges from assessing the constitutionality of government surveillance (since they never even find out about it), and deprive criminal defendants of the venerable common-law right to examine and challenge the evidence against them. He also makes the broader point that the NSA’s enormous trove of surveillance data has provoked an “unquenchable thirst for access” among other law enforcement agencies, whose leaders imagine all the wonderful things they could do with it.

All this underscores, of course, that while drug-war prosecutions are supposed to be just like other kinds of criminal cases, in practice they have a special status and are treated differently. But one may still ask, given that this administration and the last one (and quite likely the one before that) have repeatedly misled the public about the existence, extent and scope of surveillance programs, whether there is any reason to believe that the pipeline of secret data and the manipulation of the justice system is limited to drug cases. Should we be confident that NSA intercepts and foreign-intelligence wiretaps and “parallel construction” will never be used to build criminal cases against hackers, leakers, Occupy activists, investigative journalists, unfriendly pundits and any other dissidents on the left or the right whom the government decides to persecute?

“We have no assurances about any of that,” Fakhoury told me by phone from his San Francisco office. “As information about these programs has unfolded and we keep learning more, we also see that at every step along the way the government has justified the program through fancy word games and legal language that does not mean what it appears to mean. Right now the government hasn’t done anything to give anyone faith or trust that the limits they claim are actually in place.”

In theory, the DEA disclosures could and should have outraged Americans across the political spectrum, especially when added to all the other bad things we've learned about our government this year. Except that blind partisan loyalty now trumps everything in national politics, and almost nothing about our country’s slide toward soft police state still shocks anybody. Conservatives only care about civil liberties when they affect rich and/or rural white folks, and support any degree of tyranny when it comes to conducting the drug war and locking up poor people. As Bruce A. Dixon of Black Agenda Report notes, liberals of all races would have howled about this stuff under Bush-Cheney, but with a black Democrat in the White House they make excuses or pretend it isn’t happening.

Maybe we’re all just dazed by the tide of NSA revelations, distracted by celebrity sex scandals and the idiotic infighting of Washington, and insulated by the techno-workaholic bubble of ordinary life, in which America still seems like a calm and normal place. If I had to break it down, I would guess that half the population clings to the optimistic belief that reasonable people are in charge and things will work out for the best, while the other half has become entirely cynical. I mean, who still thinks that drug dealers have rights? That's so 20th century! The rest of us gave up those delusions when we got iPhones.