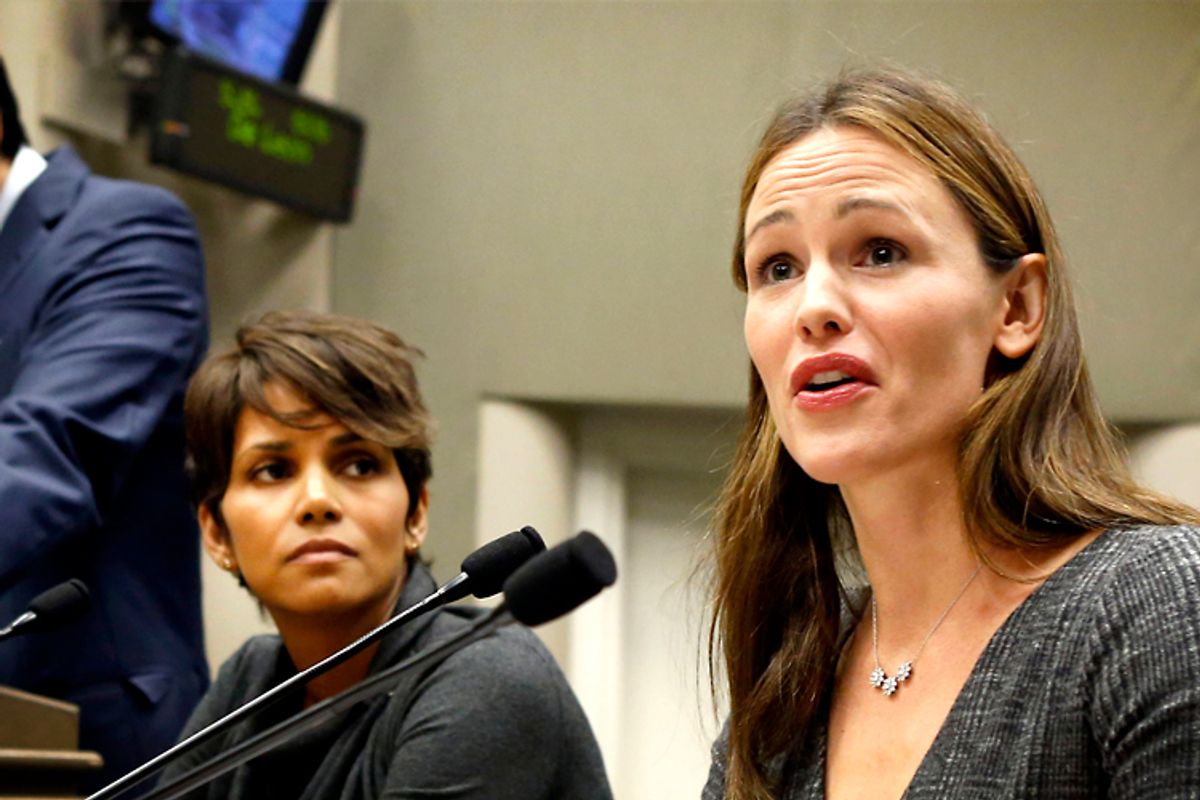 Things were supposed to have changed a long time ago. Sixteen years ago this month, Diana, Princess of Wales died in a Paris tunnel while being pursued by paparazzi. In the aftermath of the accident that killed her and two other people, there was a brief moment of strong collective disgust at the stop-at-nothing tactics of tabloid journalists. There was a concerted effort to impose restrictions on how far they could go. So why are Halle Berry and Jennifer Garner pleading before lawmakers for better protection for themselves – and their children -- this week?

The actresses appeared before a California Assembly Judiciary Committee Tuesday to speak out for SB606, which would impose penalties on anyone who "intentionally harasses the child or ward of any other person because of that person’s employment" including "actual or attempted recording of the child’s or ward’s image or voice without the written consent of the child’s or ward’s parent or legal guardian, by following the child’s or ward’s activities or by lying in wait." Garner, her voice at times choked with emotion, described the typical scene at her home, saying, "The price paid for pictures of celebrity children is now absurdly high. They have a bounty on their heads every day. Literally every day there are as many as 15 cars of photographers waiting outside our home … Large, aggressive men swarm us causing a mob scene, yelling, jockeying for position, crowding around the kids." And Berry, explaining that "We're moms here who are just trying to protect our children," said that during her custody battles with her daughter Nahla's father, paparazzi have confronted the child, asking, "How do you feel, Nahla? You may not see your father again. How do you feel about that?" She added, "They say curse words and call me names, all trying to provoke some sort of response to sell a photograph."

Some things have changed for the better since the August night that Princess Diana went into a tunnel and never made it to other side. Today, the ethics code of the UK Press Complaints Commission commands that "Journalists must not engage in intimidation, harassment or persistent pursuit. They must not persist in questioning, telephoning, pursuing or photographing individuals once asked to desist; nor remain on their property when asked to leave and must not follow them." In 2010, California law expanded to make "a defendant who commits an assault against a plaintiff with the intent to capture any type of visual image, sound recording, or other physical impression of the plaintiff … liable for up to 3 times the amount of any general and special damages that are proximately caused by this act."  Last year, the law was invoked  in a case regarding a paparazzo who "aggressively" chased Justin Bieber's car in Los Angeles.

But the breathtaking relentlessness of tabloid culture endures, in abundance. And that's a culture we as consumers and readers participate in and perpetuate, with every godawful, humanity-depleting click of a nip slip or wardrobe malfunction, with every purchase of a checkout line magazine promising STARS WITHOUT MAKEUP or WORST BEACH BODIES or SAD LAST DAYS. A friend in Los Angeles recently witnessed Josh Duhamel being chased on foot by a photographer. Consider that for a moment -- we have created a world in which it's now somebody's job to chase around Josh Duhamel. I once experienced a mob of photographers appear seemingly out of nowhere to block a SoHo street, because Kate Moss was walking with her young daughter. And the fact that anybody with a phone can become an instant quasi journalist has in many ways only made the condition worse – a bozo with no boundaries doesn't need a $10,000 camera or sophisticated recording equipment to impose on someone's privacy.

This bottomless appetite for the first or the newest or simply the unguarded doesn't just affect the kind of pampered celebrities their detractors say have no right to complain. Two years ago, we learned that Rupert Murdoch's News of the World had hacked the voice mails not just of celebrities and politicians but of a murdered 13-year-old English schoolgirl. And last month, a fence company in Cleveland donated a high protective barrier to kidnap survivor Gina DeJesus, to give the woman protection from paparazzi and amateur gawkers. Toxic tabloid culture can affect anybody – especially anybody who has the misfortune to become a crime victim.

The new measures in California would offer greater protections for those who need protection most – children. But laws aren't enough. We have to tell publishers that we're not going to click on their CAUGHT OFF GUARD photos, and why. We have to refuse to support an industry that makes money off harassing and abusing our fellow human beings, including young children. As Jennifer Garner asked Tuesday, "What is the psychological toll of being the object of incessant harassment? What happens to the mind of a child when the only thing they see from the outside world is aggression, hostility and pursuit?" We have to learn from the paparazzi, and we have to be persistent and we have to be vocal. Because it's the only way to get any attention.