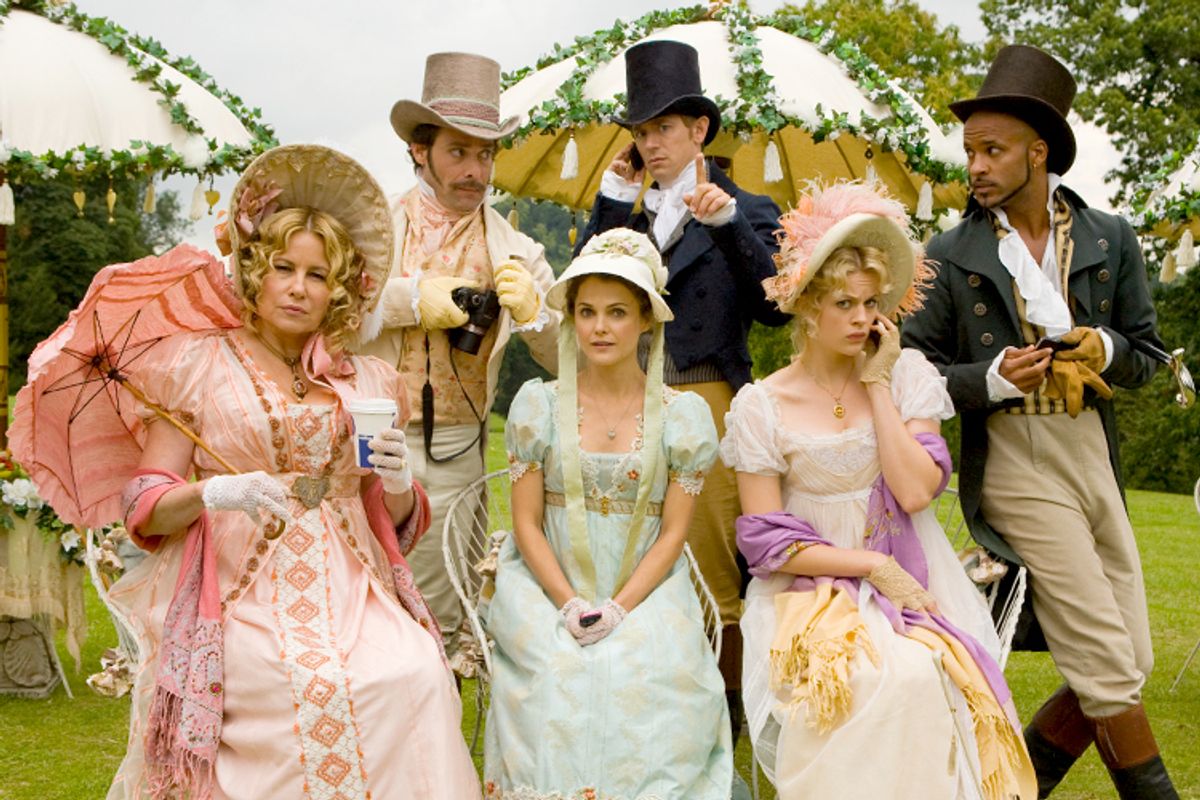 I am not going to start a review of a movie about a Jane Austen fanatic by saying anything about universally acknowledged truths, because the cliché of invoking the first line of "Pride and Prejudice" to explain anything involving Jane Austen has got to stop somewhere. I will just mention, in an entirely 21st century vernacular, that the worldview of the great English novelist does hold an undisputed, deeply compelling and endlessly modern allure. Austen somehow never gets old. She's been adapted into "Clueless" and "Bridget Jones's Diary"; her imminent appearance on British currency recently set off an online frenzy.

So obsessively, unflaggingly adored is Austen that the fanciful Regency cosplay world of "Austenland" is not too great a stretch to envision as a real place. Nor is the spinsterish Miss Jane (OF COURSE) Hayes, with her dainty collection of teacups and her life-size Colin Firth cutout and her grudging tolerance for the modern, largely ball gown-free world, that far from a type familiar to any veteran of a liberal arts education. (The type is so recognizable she's even already been done before, in the charming British miniseries "Lost in Austen.") The movie's creative team knows there are a lot of real-life Jane Hayeses out there -- it's been rolling out women-only early screenings, complete with "I (HEART) DARCY" tote bag giveaways. It's a bold gambit, one that brazenly declares to its audience that the word "chick flick" isn't a pejorative but rather an indicator of an exclusive club.

Played by Keri Russell of "The Americans," Jane is a drab office worker with a failed romantic history, an apartment that's a juvenile fangirl shrine to her favorite writer and dubious bragging rights about memorizing the first three chapters of "Pride and Prejudice" when she was 13. She's devoted to all things British as only an American can be. Stuck in a rut and yearning for what a travel agent promises as a "life changer" adventure, Jane impulsively blows her savings on a fantasy journey to England – and an immersive resort called Austenland. But when she gets there, she learns her limited budget has earned her a drab role as an "orphan of no fortune" while other guests with greater means and a weaker grip on English history get a more extravagant experience. She takes a swift dislike of one of the Austenland actors, the owner's grumpy nephew Mr. Nobley (JJ Feild), while developing a clandestine – and strictly off-limits -- flirtation with a grounds worker named Martin (the perpetually irresistible Bret McKenzie). But as any fan of Austen knows, first impressions aren't always accurate.

Co-written and directed by "Napoleon Dynamite's" Jerusha Hess, from the novel by Shannon Hale, "Austenland" is at once a standard-issue romantic comedy and a warm send-up of literary fandom. (It's produced by "Twilight" author Stephenie Meyer, who knows a thing or two about wildly popular and firmly chaste romances herself.) Hess has an easy flair for the lingua franca of nerds, and a slapstick touch for depicting their awkward interactions with members of the conventional world. Jane's ardent desire to steep herself in a simpler, more refined era contrasts with the broader, baser pursuits of her fellow guests – including the wealthy, just-in-it-for-a-lark Miss Charming (Jennifer Coolidge, doing her standard dimwitted, oversexed vulgarian role and doing it with her usual finesse) – and the jaded Austenland staff – including the snooty Mrs. Wattlesbrook (Jane Seymour) and the simpering, lockjawed Colonel Andrews ("Battlestar Galactica's" James Callis). Jane may be a borderline tragic dork, but she's also, embodied by the smart, simmering Keri Russell, a full-blooded heroine who just needs to figure out how to write her own messy, unbuttoned story. It ain't PBS "Masterpiece," and that, for once, is a good thing.

The superficial assumption casual observers often make about Janeites is that what they're gaga over is Austen's milieu of posh accents, tenderly eloquent suitors and leisurely strolls through elegant gardens. But scratch any serious devotee and you'll likely find someone more obsessed with her shrewd observations on social mores, money and family, her sly wit and her characters with true character. Marriage for her may be a much longed for successful arrangement, but love, for Austen, is a profound connection between two bright, good people. That, in a nutshell, is her true knee-weakening power. And like Jane Austen herself, "Austenland" scoffs at the hypocrites and celebrates the sweet social misfits. It says weirdos deserve romance too, and that Austenland isn't so much a page in a book or a place on a map, but a corner of your heart.