Confessions of a Harlem gentrifier

As part of a white influx into a historically black area, I can't help feeling like a tourist -- or an intruder 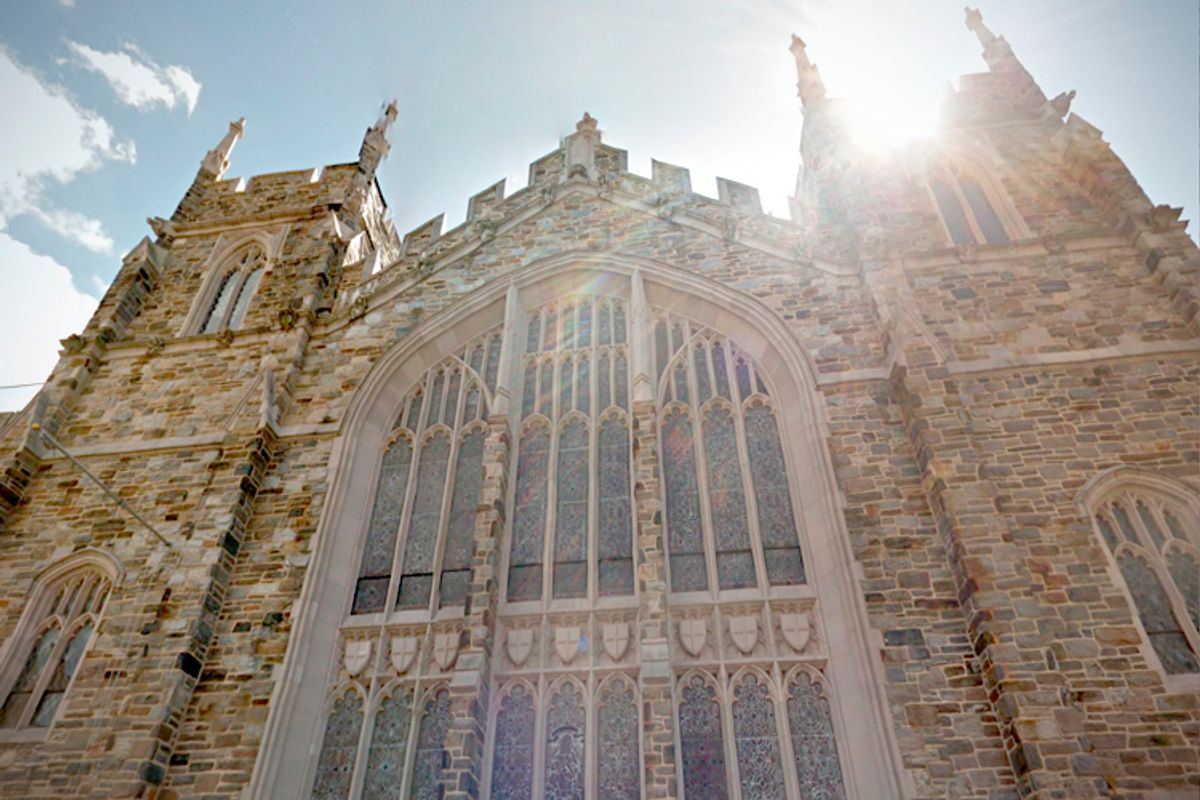 I can see the church from my window. All grey stones, stained glass and towering Gothic spires, it looks like a fortress, its walls mightier than Jericho's.

If ever there were a monument to mark just how much I don't belong here, it might look like this, the Abyssinian Baptist Church. Founded in 1808 by Ethiopian seamen, and built in 1923 on this street in Central Harlem, it has served the community as a hub of spirituality and politics for decades.

I, on the other hand, have been in Harlem for just over six months. With no historical ties here and only one friend in the area besides my brother (with whom I share the sublet) I'm an outsider.

This is never more apparent than on Sunday mornings, when my neighbors flock to the church for services. Sometimes I'll walk by them on my way to get a coffee at the deli on the corner: the women striking in ornate dresses and pillbox hats, the men sharp in crisp suits.

But there are others there, too, dressed in shorts and T-shirts, a horde of European tourists carrying guide books and cameras. Some are lining up outside for a chance to witness the church's famed choir, like the ones they've seen in movies and on television. Others pick a spot on my stoop to gawk at the tremendous scene, a happening Columbia University's Patricia J. Williams likened to a safari. "All that's missing is the hats," she said.

For me, it's always strange to wade in the middle of these disparate groups, both literally and figuratively. Like the church congregants, I live in Harlem. But I can't help noticing that I have more in common physically with the tourists, a sensation that makes me feel like a visitor, at best, an intruder, at worst.

For the most part, though, I've been met with nothing less than kindness here. I've felt safe walking the streets at night, and I've come to expect some of the same friendly faces at the deli and the library. Only once, walking to the subway with my brother, did I feel unwelcome, when a woman called us "white devils" and shook her umbrella violently in our direction. But, I suspect that woman was simply crazy, an outlier rather than a representative of the neighborhood.

If she were representative, would she really be so wrong to want me gone? In the past decade, the black population in Harlem, a place "synonymous with black urban America" for nearly a century, has shrunk to its lowest levels since the 1920s. That, as the number of white people in the neighborhood has doubled.

But I wonder: Is one unquestionably the result of the other? And, further, is a little diversity really so bad? A sociologist at Queens College said that the influx of different ethnicities has made Harlem "as it was in the early 1930s -- a predominantly black neighborhood, but with other groups living there as well."

Indeed, there are times I think of gentrification as a natural part of a city's growth, especially since, as a person with a Jewish background, I know that around 80 years ago, Harlem was once the third-largest Jewish settlement in the world. Not too long ago, many of the churches nearby were synagogues, including the Baptist Temple Church on 116th, the Bethel Way of the Cross Church of Christ on 118th, Christ Apostolic Church of U.S.A. on 112th -- that is, before the Jewish population all but disappeared here.

I don't want to see people's lives upended, and I certainly don't want to be the cause. I feel, though, in some sense, that it's all unavoidable. A freelance journalist just out of college can't afford to live in the ritzier parts of Manhattan, not to mention the trendier sections of Brooklyn. Others like me will move to Harlem and the like out of necessity, and the consequences will take their toll. But I still ask myself: What can I do to grow in this city without hampering someone else?

Not much, as far as I can tell. There are larger solutions, of course, like building more affordable housing alongside the shiny new condos, but that's not quite within my power. All I can really do, I think, is to respect the uniqueness and significance of the community where I live, be conscious of my place in it, and return the courtesy I've been shown by my neighbors. It's not much, but it's something.

To this day, I haven't been inside the Abyssinian Baptist Church. But some nights, I open my window, and along with the breeze gently lifting the sheer curtains in my apartment comes the voices of the choir. It's a powerful sound, a full-throated roar loud enough to break through those old stones and reach my ear. The people inside probably don't know about their secret audience, in fact, probably never imagined a guy like me would live in earshot of this heavenly sound. But I still listen. And it's still beautiful.

Jordan G. Teicher is a freelance writer living in New York. He has written for Slate, NPR and the New York Daily News. You can follow him on Twitter at @teicherj.