Did a writer get bullied on Goodreads? 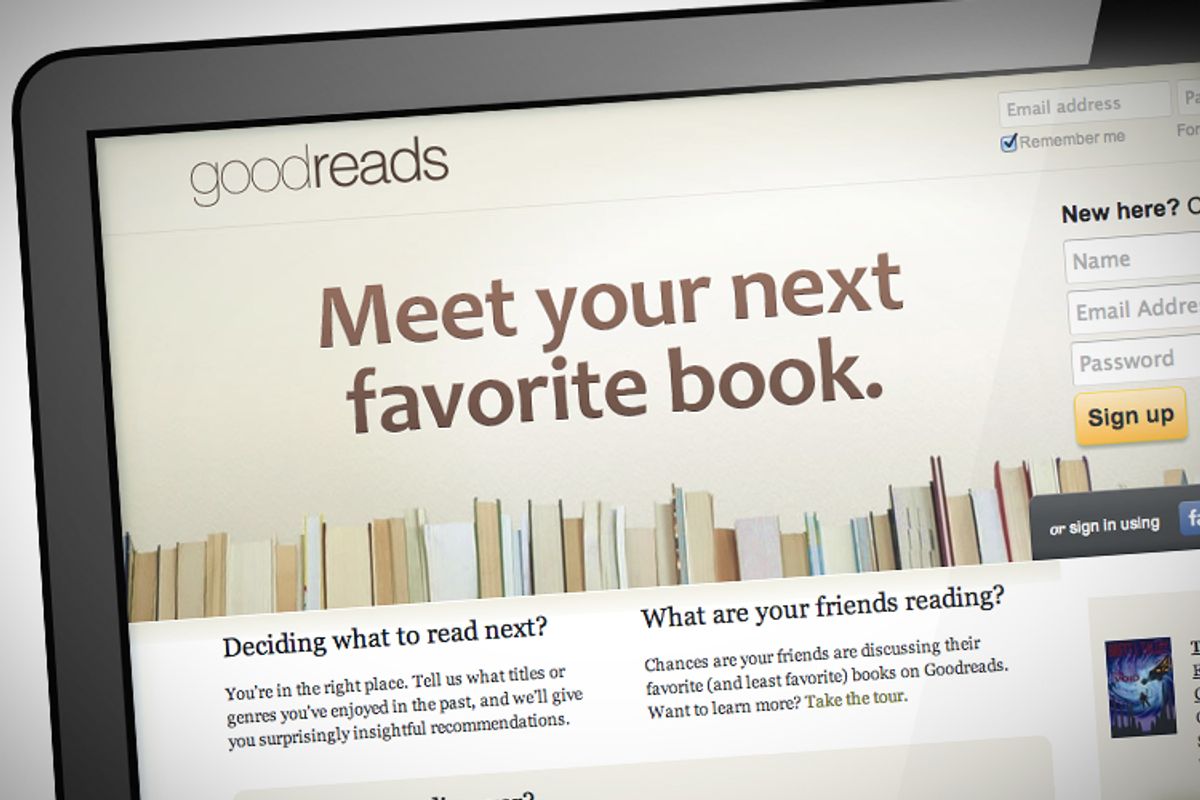 You don't necessarily think the world of bookworms would be full of bullies. Readers, after all, are assumed to be a more evolved species, capable of articulating higher sentiments than "You suck." Well, not always. Just a short time ago, Lauren Howard was gearing up for the release of her self-published debut novel, "Learning to Love,"  a tale in which "love at first sight isn’t always as simple as a fairy tale." But then the Goodreads crowd reportedly decided to assert its dominance over the fledgling author, and that's when things changed.

As the 22-year-old self-proclaimed "shopaholic, pop culture junkie, book lover and writer" explained on her blog Tuesday, she has now decided to not release the book, and the "main reason is recent occurrences on the website Goodreads." She claims that though her book was not yet in the hands of potential reviewers, readers were already giving it two-star reviews. "I asked about this on a Goodreads message board," she says, "and it was explained to me that people can rate as a way of expressing their interest in the book." But by then, she writes, she'd triggered the ire of some of the community for questioning it. "People started to rate 1-star to prove 'we can rate whatever the hell we want.' My book was added to shelves named 'author should be sodomized' and 'should be raped in prison' and other violent offensive things, all for asking a simple question as a newcomer to the website." She adds that "I've contacted Goodreads directly and nothing has been done because, again, this is acceptable behaviour."

Those earlier comments on Goodreads have now been deleted, so it's impossible to gauge their severity, or how a young, debut author with a self-published book may have viewed them. And as a colleague says, "I've seen authors respond to a mixed Goodreads review as if the reader had burned a cross on their lawn." But if you want a sense of how these things can go down, it's notable that one of Howard's remaining Goodreads commenters says that "Reviewers have the right to rate a book however they feel like, with absolutely no justification what so ever. Get over it princess." And there's a whole Stop The GR Bullies blog devoted to "Taking a Stand Against Bullies, Not Against Reviews," which if nothing else offers a fascinating window into the complex web of Goodreads drama.

Writing a year ago in HuffPo, author Ray Garton said, "If you think someone who writes a bad review of your book is bullying you, then you should quickly develop a thick skin or stop writing immediately and do something else." But a bad review is not the same as a threat or intimidation, and frankly even a run-of-the-mill pan based on an unread book is plain dishonest.

Howard, who describes herself as a woman who was "bullied throughout her entire high school career," says that "I have NEVER expected this journey to be all sunshine and rainbows, I knew some people would hate my book but I could have handled THOSE reviews. What I cannot handle and what I didn’t expect is being targeted PRIOR TO RELEASE by a group of bullies who have wished horrible things, including rape and death, on me" and that "I will not be a part of a site where it is acceptable to wish rape, sodomy, abuse and death on someone." Though it's only her word on this, given the ease with which rape and death threats are tossed around at women online, it's certainly not difficult to imagine.

On Twitter Tuesday, she added that she was "literally scared" and had recently "had a few people contact me on Facebook with aggression." But because the Internet community will almost always generously build you up to almost the degree it can tear you down, she's also noted that she's received "truly amazing" support. On Goodreads, meanwhile, a new crop of users has given her book four stars – a strange gesture for a now not-to-be-released title, to be sure, but in this case, a simple statement that critics can game the system in a more positive direction too. Yet the stars were never the point. Among the great arguments that the trolls and bullies love to fall back on is the idea that abuse is legitimate criticism. As author Jamie McGuire tweeted Tuesday, "Negative reviews are part of the business. Bullying authors shouldn't be." And a community that tolerates the latter in the name of the former is a community that might claim to espouse reading, but one that has a serious comprehension problem.

UPDATE: On Twitter, Howard updated her claims Thursday to say, "The death threat was based on a shelf that was explained to me was the reviewer saying THEY would rather die than read my book. This whole damn thing is one huge misunderstanding. No one is informed. It started on a misunderstanding and no one is learning." She has also removed the original blog posts on the incident, saying "I'm shutting myself off from this and living my life. I do not nor did I ever want any part of this."