"The Mortal Instruments": Methadone for Twi-hards

Vampires, demons, hot guys, eyebrows and cheekbones: This sludgy blend of "Harry Potter" and "Twilight" has it all 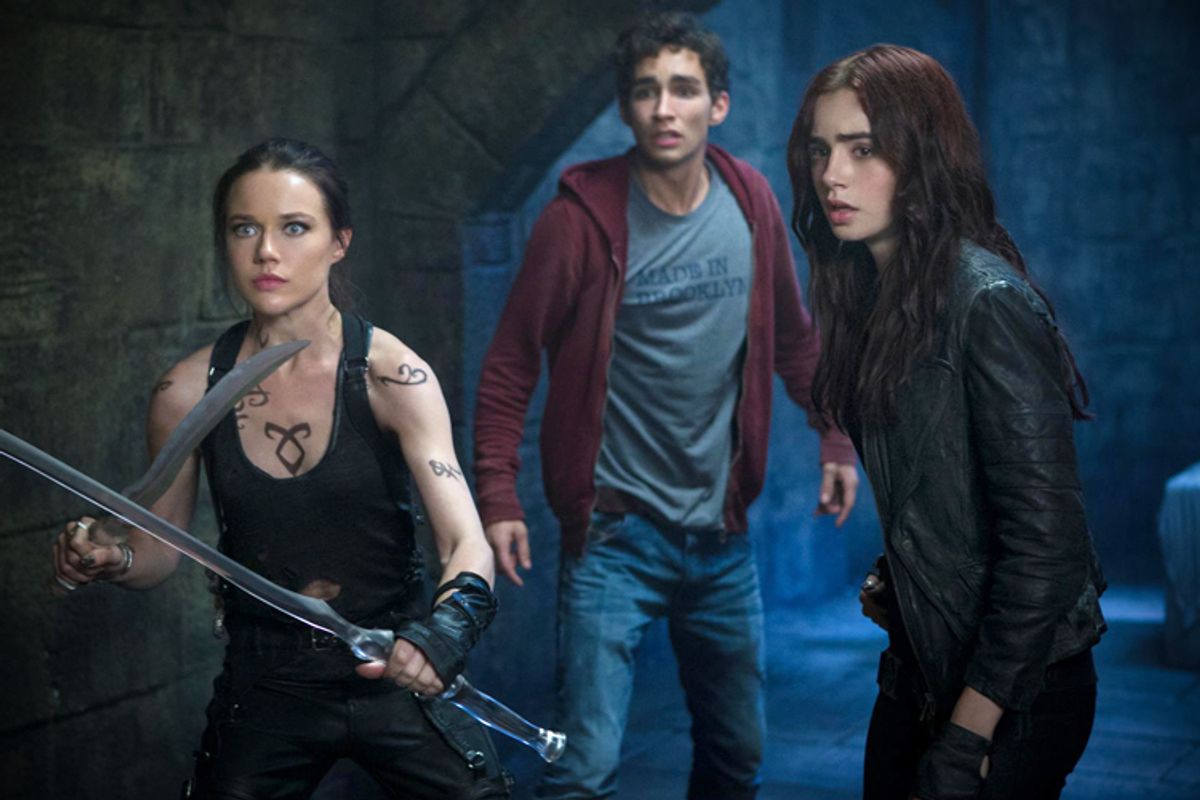 Cheekbones, eyebrows, excellent hair and some perverse and disgusting demons with that entrail-sex organ look made possible by CGI. That’s most of what I remember about seeing “The Mortal Instruments: City of Bones,” the opening installment in a new teen-oriented fantasy franchise that makes few concessions to outsiders. As directed by Harald Zwart (of the “Karate Kid” remake) and scripted by Jessica Postigo Paquette, this is a cheerful, high-energy screen adaptation of the best-selling young-adult novel by Cassandra Clare that may fill the post-Potter, post-“Twilight” void, if only on a temporary basis. It’s an episodic yarn about half-angelic “Shadowhunters” arrayed with and against vampires, werewolves and demons that arrives at the tail end of summer, when its target audience is presumably home from the beach but not yet back in the classroom.

With its blend of romance, action, magic and bits and pieces of supernatural hoo-ha imported from other sources – the Potterverse and “Twilight,” most obviously, but also “Star Wars,” “Avatar,” “Lord of the Rings” and the “Blade” and “Underworld” series – this initial “Mortal Instruments” picture has the vibe of a straight-to-video release from the mid-‘90s, except with a $60 million budget and considerable special-effects expertise. Its young stars have the right feeling of almost-famous beauty and anonymity: Lily Collins, who’s had supporting roles in “The Blind Side” and “Stuck in Love,” plays Clary Fray, a New York teenager who discovers that her missing mom has been concealing her true identity, heritage, destiny, etc. Clary’s principal foils are a blond, brooding Anglo Shadowhunter named Jace (Jamie Campbell Bower, who has appeared in both the “Potter” and “Twilight” series) and her mildly nebbishy “mundane” would-be boyfriend, Simon (Robert Sheehan, of the British teen series "Misfits" and the Irish crime series "Love/Hate"). [This is a correction: I previously had this character confused with Alec, played by Kevin Zegers.]

It’s evidently important, in this kind of universe, to present the young female protagonist with sexual dichotomies, as with the choice between the preening, narcissistic Jace, who is liable to play a Bach fugue or kiss her in an enchanted garden at midnight, and the loyal but thoroughly chaste Simon, who at one point gets abducted by vampires and strung up in what looks very much like an S/M bondage club. Jace is like all possible genders at once, Simon none at all. This series also continues the “Twilight” tradition of making parental figures seem inordinately young, thereby suggesting perverse possibilities that may (or may not) be unintentional. In this case, Lena Headey, who plays Clary’s mother (and has lately been seen as Cersei Lannister on “Game of Thrones”), is 15 years older than Lily Collins, although they could easily pass for sisters. Jonathan Rhys Meyers (Henry VIII on “The Tudors”), meanwhile, plays Valentine, a Shadowhunter who has gone to the dark side in some confusing fashion and who may or may not be Clary’s dad, and he’s only about 10 years older than Collins.

But of course, all these people are angels, or semi-angels or, in Clary’s case, semi-demi-angels, so even though they can die, maybe they don’t age normally? It’s safe to say there was a lot about this movie I didn’t quite get. What I did grasp is that Clary thinks she’s a normal New York teenager – that is, a normal New York teenager who lives in a neighborhood that is clearly in suburban Toronto – until she starts drawing weird rabbit-head glyphs and having fragmentary memories and attracting the attention of Jace, whom “mundanes” like Alec can’t even see. The lady who lives on the ground floor of her building (CCH Pounder) is a witch, and Clary gets drawn into a literally underground New York scene, dressing in discount fetish gear and hanging out in a decrepit, sub-Hogwarts place called the Institute, presided over by an untrustworthy looking tweedy fellow called Hodges (Jared Harris, who played Lane Pryce on “Mad Men”). Shadowhunters are half-human guardians trying to save the earth from demons, you see, or all of them except Valentine, who has defected to the demon team and wants to find a Holy Grail-type artifact whose whereabouts Clary’s mom may have hidden in Clary’s mind, or something.

I quite enjoyed “The Mortal Instruments: City of Bones” in patches, like the super-creepy scene when Clary has to enter the catacombs where all former Shadowhunters are interred, presided over by some corpse-like monk-dudes with stitched-up mouths, in order to get her repressed memories back. But a lot of it is super-generic fight scenes and Clary not quite getting to kiss Jace for various reasons, and you almost never get that feeling of specific gravity, of commitment to the universe, that was present even in the most extreme dumbass moments of the “Twilight” and “Potter” movies. I imagine fans of Clare’s books will find this movie largely satisfactory, but it’s distinctly a rush job, an almost random collection of sexy-supernatural teen signifiers aimed at squeezing the penultimate dollars out of a declining trend. There’s something almost cool about that. (But, OK, not quite.)