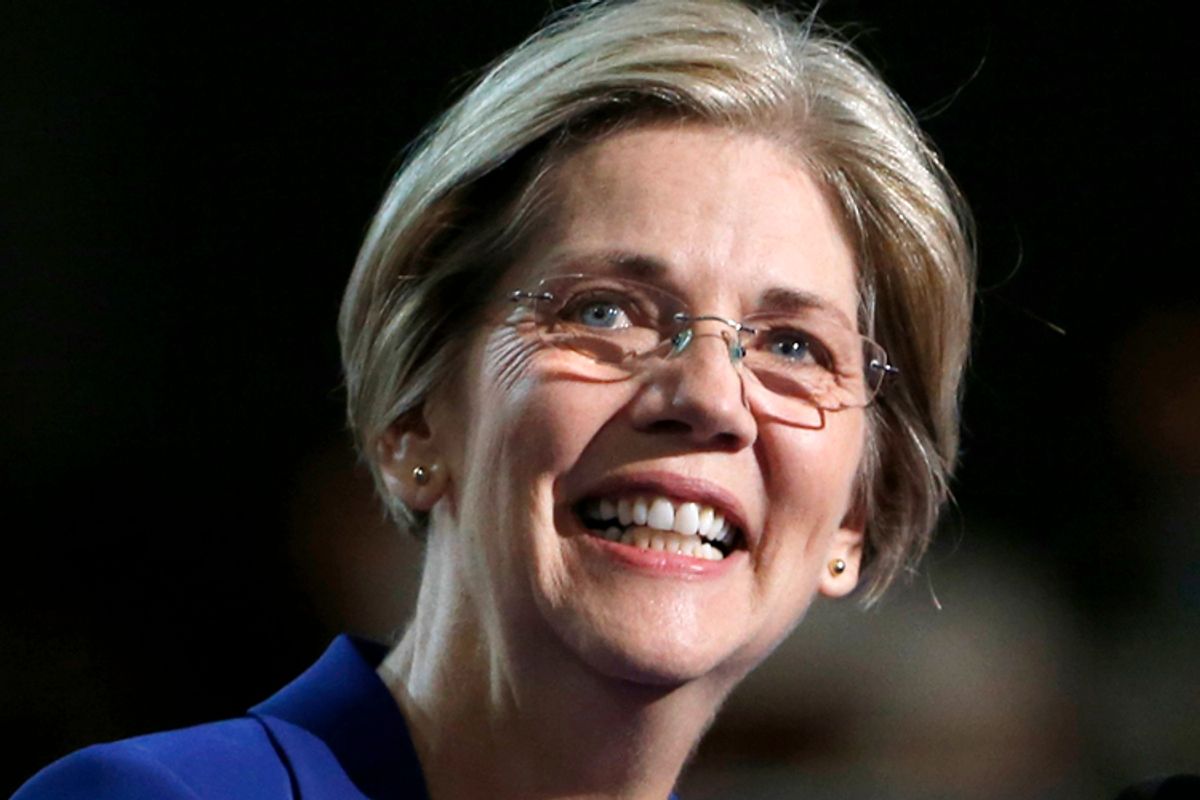 It's been well-documented that the 113th Congress specializes in getting nothing consequential done. While the nation’s supply of named post offices is apparently well-stocked, anything more critical has generally stalled out, with little hope to break the gridlock.

So let’s say you’re a high-profile freshman senator walking into this den of inertia, and you want to make your large following proud and advance your agenda, but you’re in no position to do that legislatively? How do you, Elizabeth Warren, find your way through this minefield, and even chalk up successes?

“It’s all about learning to use the new tools,” Warren told Salon in an interview this week. “In the Senate, there are more tools in the toolbox than are obvious.” Warren, now the senior senator from Massachusetts (Ed Markey, with a 37-year congressional career, is the junior member), has employed those more unconventional tools effectively, doing her part to both change the conversation around the financial industry inside and outside Washington, and change the sharpness of the regulatory response to financial misdeeds.

Warren sits on the Senate Banking Committee, which has marked up all of two bills so far this year (she played a role in both, passing an amendment to a national insurance licensing bill and working closely with the committee leadership on reforming the Federal Housing Administration). But she has really shone in oversight hearings, where she has gained a reputation for offering uncomfortable questions to regulatory officials about their lack of prosecuting criminal activity on Wall Street.  “Too big to fail has become too big for trial,” she said at a hearing in February. “How big do the biggest banks have to get before we consider breaking them up?” she asked Treasury Secretary Jack Lew in May. And she’s used the bully pulpit outside the hearing room, too, schooling CNBC anchors so badly on the history of financial regulation that the network forced the clip to be removed from YouTube.

This creates a consequence for the regulators for lax enforcement. Nobody wants to end up on the business end of an Elizabeth Warren viral video, and the hope is that the prodding will spur the regulators into action, or at least keep them alert. “There’s a lot that banking regulators can do to make the system safer without Congress passing any new laws,” Warren told Salon. “But only if they do their jobs. It's about accountability in both directions. The largest financial institutions should be held accountable, and so should the regulators.”

This extends beyond the occasional badgering of witnesses (“I beg your pardon,” said Warren when I termed it that way, though she misunderstood, as I have a great affection for badgering). In one of her first major actions, Warren opened an investigation into the Independent Foreclosure Review, which was supposed to review every foreclosure from 2009-2010 for errors, but ended up so botched (the banks picked their own reviewers) that regulators shut it down and gave wronged homeowners a seemingly random amount of cash compensation, typically around $300. Warren demanded information on how the aborted reviews were conducted, what they found and how regulators arrived at the final penalties. After a series of embarrassing hearings on the subject, last month Federal Reserve chairman Ben Bernanke promised the release of some details, though none have yet come out.

Other agencies have come to expect Warren’s queries. Just yesterday, she asked the Justice Department about why it settled with five large banks who submitted fraudulent mortgage insurance claims to the FHA for $225 million, when based on the number of claims made public in a government report, the damages could have been as high as $37 billion. That comes out to a settlement for 0.6 percent of potential damages.

Warren has had more luck with the Securities and Exchange Commission, which she previously criticized for generating settlements with giant financial institutions on securities fraud and other violations without making the guilty party admit wrongdoing. Corporations can’t stand this because they expose themselves to future litigation, could suffer reputational risk and even lose their banking licenses. But putting this price on misconduct could have a tremendous deterrent effect (in addition, fines in cases where the defendant admits wrongdoing are not tax deductible).

The Massachusetts senator used both hearings and a series of letters to new SEC chairwoman Mary Jo White to question the policy. This has borne fruit: White announced a new settlement policy that will require admissions of guilt in more cases. “I’m very optimistic about the direction Mary Jo White is taking the SEC,” Warren said. “She didn’t make a generalized ‘we’re going to get tough’ statement, she identified a class of cases in which the agency would take a different position, with harsher consequences for companies that don’t cooperate.”

“Commissioner White is showing some real spirit,” Warren added. “She has come in and made it clear that it's a new day in town.”

Just this week, hedge fund manager Philip Falcone admitted wrongdoing in a settlement over improper use of funds at Harbinger Capital, the first individual to do so since White announced the new policy. While Falcone didn’t admit to liability on specific violations of law, Warren called it a “step in the right direction,” and an indication that “the SEC is a watchdog that’s starting to show some teeth.”

So while critics call Warren’s verbal jabs mere showboating, combined with her persistence they have had a tangible impact, both exposing some bank-friendly regulators and spurring others to better alternatives. “Those who criticize her for being all talk and no achievements don’t understand the Senate,” said Jeff Connaughton, a former chief of staff to Sen. Ted Kaufman who wrote an appreciation of Warren earlier this year. “I think she and others have made regulators think twice about how kid glove treatment of the banks will look in a harsh Senate spotlight.”

Warren has also done plenty of unsung work in her freshman year. She actually has the highest attendance at Banking Committee proceedings so far this year, making 27 out of 35 hearings and executive sessions, more than chairman Tim Johnson or ranking member Mike Crapo. And in hearings, she almost always stays from start to finish, learning from her fellow members’ questioning and often tailoring hers to cover a different subject area. “I learn a lot from those hearings,” Warren said. “Not everyone is engaged, but there’s a core of people really interested in the issues and really driving them.”

The freshman senator named her Banking Committee colleagues Sherrod Brown and Jeff Merkley as part of this core group. (She even had nice words to say for Republican Bob Corker, whom she has worked with on the future of Fannie Mae and Freddie Mac “since before I was a senator.”) Another reformer, Carl Levin, has made a habit of using his Permanent Subcommittee on Investigations to delve into issues of financial crimes, most recently with the “London Whale” trade by JPMorgan Chase. Levin’s report was instrumental in the criminal indictments of two ex-traders at the bank for hiding losses and lying to regulators and investors. “Progress on the London Whale and admit or deny has come because of three or four determined senators and despite two captured committees,” argued Jeff Connaughton.

The increased scrutiny has a cumulative effect. When one regulatory agency like the SEC changes its policy, it provokes other agencies to consider toughening theirs. When one senator points the way toward more provocative questioning of the broken regulatory response to a tsunami of financial crimes, other senators want in on the act. “She has elevated ‘the game’ of other senators,” said Bartlett Naylor of Public Citizen. “No longer can her peers survive a committee hearing on a one-minute staff briefing before asking a question written for them, if it might be at odds with one of her positions.”

Warren is hoping such momentum-building will play out in her first banking legislation, which would reinstate the Depression-era “Glass-Steagall” protections separating commercial banking (like taking deposits and making loans) from investment banking (like trading derivatives and other Wall Street casino gambling pursuits). Critics allege that the Glass-Steagall repeal had nothing to do with the financial crisis. But in a system where those duties are separated, Warren believes, regulators would have an easier time at their jobs. “They wouldn’t have to develop expertise in multiple lines of business,” she said. “The SEC can oversee the non-bank institutions, and bank regulators could focus on the safety of banks.” While all big legislation faces a long road in a divided Washington, Warren partnered with Republican John McCain, Democrat Maria Cantwell and Independent Angus King on the Glass-Steagall bill to raise its profile, using an outside-inside approach. “We’re two freshmen and two members not on the Banking Committee,” Warren said, “and we got together to make this a more urgent issue.”

Regardless of the eventual outcome of that bill, Warren has learned that a senator has power if he or she knows how to wield it. As for how else she can make an impact, Jeff Connaughton has a suggestion. “Run for president.”

I asked if she had any reaction to that kind of buzz. The senator had a pat response. “No!”

Read the full transcript of our conversation here.