Pick of the week: A dozen pints to the apocalypse!

Pick of the week: "Shaun of the Dead" creators end their Brit-com trilogy with a boozy bang in "The World's End" 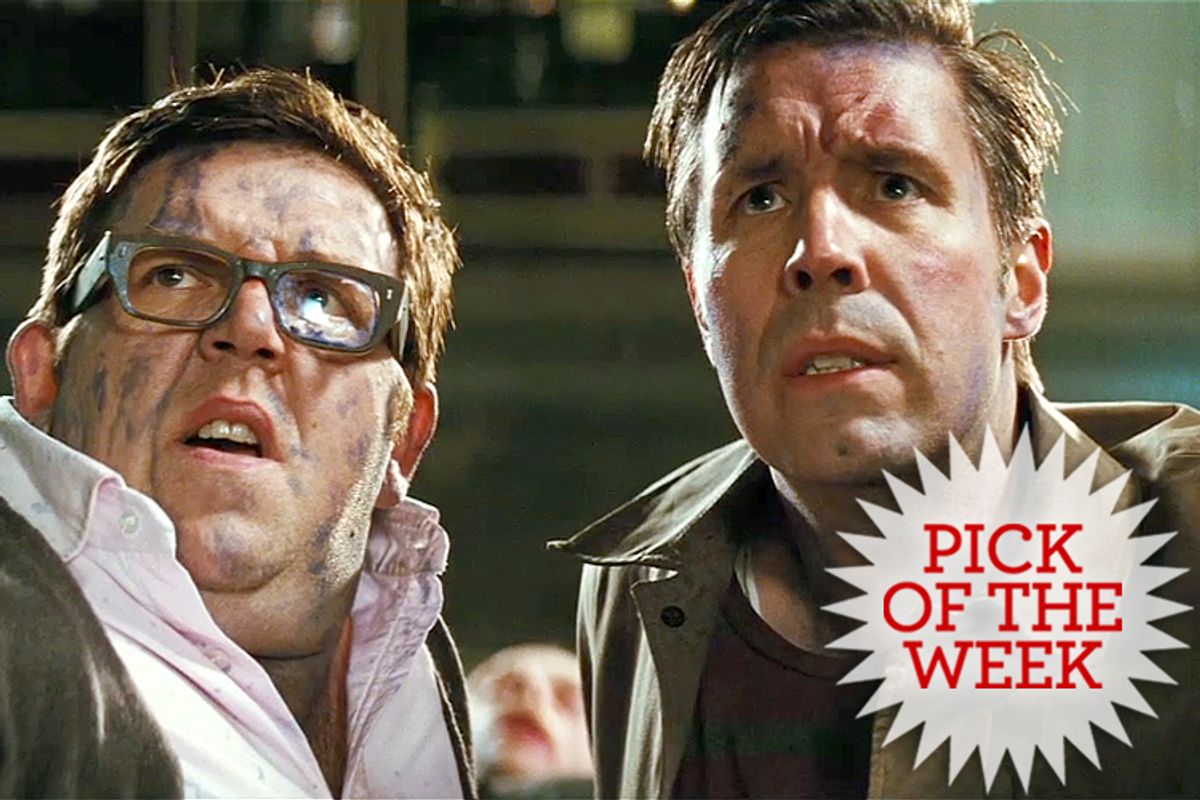 Nick Frost and Paddy Considine in "The World's End"
--

If you’ve seen “Shaun of the Dead” or “Hot Fuzz,” the previous two films in what we can now call Edgar Wright and Simon Pegg’s England trilogy, you know more or less what you’re in for with “The World’s End.” (Wright directs, Pegg stars, and they write the movies together.) I think these genre-busting comedies – part social satire, and part rude and silly romp -- have generated such extraordinary fan adoration because they’re works of exemplary craftsmanship, they’re written by people with brains and they’re funny, three things that often do not go together. Beyond that, they merge phenomena that inspire intense, lifetime-commitment-level loyalty: the self-mocking and absurdist traditions of British comedy; the most beloved movie genres, including horror, science fiction and crime cinema; and the pop culture of the ‘80s and ‘90s. Seriously, what’s not to like?

Pegg and Wright have said on several occasions that one key to their success with American viewers has come, paradoxically enough, from their refusal to dampen down their Britishness or to make the films feel “trans-Atlantic.” Their core stateside audience has grown up in an era when British pop culture – from Monty Python to “Doctor Who” to the English Premier League -- has been increasingly available, and it craves an encounter with the real England, not the one with Big Ben, Buckingham Palace and double-decker buses. There are certainly satirical elements in “The World’s End” that many Americans won’t entirely grasp, like the historical marker on the roundabout (or traffic circle, as we would say) in the ghastly suburban “garden city” where this story of alcohol-fueled apocalypse unfolds. Indeed, the fictional town of Newton Haven, with its air of manicured tidiness and order and its picture-postcard fake antiquity, has no exact cognate in American suburbia. (For Britons and expats, these images -- shot in two different but entirely real London suburbs -- are likely to provoke a powerful allergic reaction.)

No cultural translation is required, however, to understand the haggard and decrepit but still charismatic Gary King (Pegg), who is this movie’s hero, antihero and villain all rolled into one. (That’s pretty close to a spoiler, but at least it’s cryptic.) Once the coolest and best-looking guy in his high school, where he sang in a post-punk band and broke numerous hearts, Gary has never gotten over a famous June evening in 1990, when he and four mates tried but failed to complete the Golden Mile, a legendary circuit of all 12 pubs in Newton Haven, concluding with one called, yes, the World’s End. The other guys have moved on, inevitably, into 40ish lives of marriage and divorce, good jobs and bad ones – you can rely on Pegg and Wright to be refreshingly unsentimental about the appeal of “real life” – while Gary has merely declined into pathetic incompetence. He’s less sympathetic than the characters Pegg generally plays, and indeed he’s essentially an idiot. But at least he has a dream.

It hardly requires any suspension of disbelief to understand why all four of Gary’s old pals ultimately agree to join him in one last assault on Newton Haven – hell, if the guy who played the role of Gary in my life called out of the blue and invited me to stay up all night and do the stuff we used to do, I’d probably say yes (before saying no and then yes again). As Gary puts it: “Five guys! Twelve pubs! Fifty pints!” Their commitment to the cause is as weak as Gary's grasp of arithmetic, admittedly: Andy (Nick Frost, Pegg’s frequent collaborator and pal) has an unspecified grudge against Gary, and has been on the wagon for many years. He’s having pints of tap water instead of bitter -- at least at first. Peter (Eddie Marsan) is a henpecked salesman planning to make it an early night. (Famous last words.) Oliver (Martin Freeman) is a suit-wearing London yuppie with a superior attitude. Steven (Paddy Considine, possibly my favorite living British actor) is still sore at Gary over a misunderstanding involving a girl, lo, those many years ago – and you’d better believe that the female in question, Sam (the glorious Rosamund Pike), will herself show up in the pubs of Newton Haven more than once before the night is over.

What our middle-aged pub-crawlers gradually discover – and this one I read as a cross-cultural truth, to be found from Bangladesh to Bakersfield – is that Newton Haven seems subtly different, somehow, than it did in the old days. It isn’t just the fact that several of the town’s formerly distinctive pubs now look identical inside and have identical hand-chalked menus offering overpriced “continental” cuisine. (Another highly British joke, but that one translates pretty well.) Maybe it’s just the suspicious looks Gary and his buddies get from the townspeople, and maybe it’s the fact that their favorite teacher (an uncredited Pierce Brosnan, in tweedy-bohemian mode with glasses and a neatly trimmed beard) appears not to have aged at all since that fabled summer of 1990. Maybe it's just that they've all gotten older and their worldviews have shifted and ... wait, that's actually not it.

Of course there’s something deeply sinister going on beneath the already horrifying surface of this placid, artificial village, and of course it’s something that will shape the destiny of the planet, the future of humanity and Steven’s chances to get back together with Sam, all these years later. You can tell all that from the trailers and ads, but I’m not supposed to go any further so I won’t. Indeed, while the action-packed final act of “The World’s End” gets pretty formulaic (as it channels everything from "Invasion of the Body Snatchers" to "The Stepford Wives"), there’s almost something serious at the core of this riotous comedy. There's something like a tongue-in-cheek plea for some massive force to disrupt a world of Newton Havens, a world of late-stage consumer-capitalist sameness, a world where everybody eats the same pasta dishes and carries the same gizmos and no one ever dreams of guzzling 50 pints – or, wait, is it 60? – in a single evening. Sure, I might be overthinking things. But at least Pegg, Wright and their mates bring “The World’s End” to an end (along with their trilogy, if it’s actually over) with one hell of a bang.