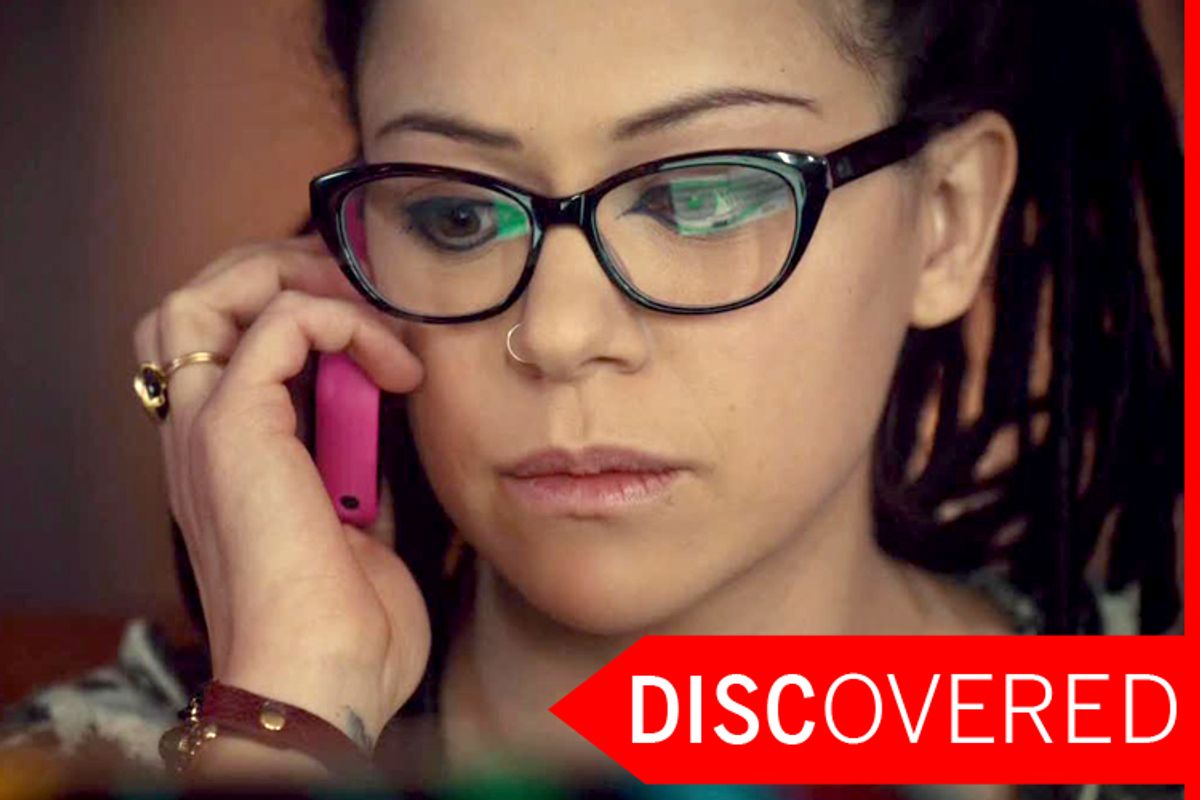 Is BBC America’s series “Orphan Black” ingenious or idiotic, or a mad-genius fusion of the two? I’m not quite sure, but I won’t pretend this addictive blend of trashy Canadian soap – I know, that sounds like a contradiction in terms – and J.J. Abrams-knockoff identity thriller qualifies as objectively good TV by today’s standards. All I can tell you is that if you get past the implausible plot howlers and clumsy character work of the first episode, you’ll be hooked. Among other things, you’ll have seen sultry star Tatiana Maslany playing numerous identical characters and playing a character who pretends to be different people. You’ll have seen one of Maslany’s personas having steamy kitchen-table sex with a “longtime boyfriend” she’s never met before, and you’ll have seen her gay best friend and foster brother, Felix (Jordan Gavaris), wearing a thong during an awkward male-bonding moment.

Even with contemporary technology, shooting “Orphan Black” must be laborious, since there are many scenes in which Maslany has to handle both sides (or three sides) of a conversation. She’s already become a critic’s darling, but I suspect the show was too arch, too low-budget and too self-conscious – too Canadian, in a word – to capture Emmy voters in its first season. That may yet come, if “Orphan Black” stays on the air. Maslany’s core character in the show, more or less, is a British-born bad-girl type named Sarah Manning who has a checkered past, a drug-dealing ex-boyfriend, a wardrobe someone describes as “punk-rock ho” (what that’s supposed to mean in 2013 I don’t really know) and a toddler daughter she dumped and now sorta wants back. For reasons I can’t entirely explain, Sarah adopts the identity – clothes, gun, apartment, car and hunky jerkass boyfriend -- of an embattled Toronto cop named Beth Childs, who looks just like her and has just jumped in front of a train.

At least officially, Sarah’s entirely looking out for No. 1 and has her punk-rock ho orbs focused on Beth’s suspiciously flush bank account. She barely notices, at first, that Beth is under investigation for the dubious shooting death of an unarmed civilian, and isn’t all that interested in the fact that after seeing Beth commit suicide she keeps encountering more and more women who look just like her, and who were born within a few weeks of her in 1984: There’s the hardass, gun-toting suburban “soccer mum” named Alison, the fashion-plate German named Katja, the deranged Ukrainian assassin called Helena and – my favorite, of course! – Cosima, the theory-damaged, dreadlocked “evo-devo” grad student from Berkeley who has somewhat figured out what’s going on.

So what’s going on? I’m not going to tell you! First of all, watch the show – the entire first season is now available on DVD and Blu-ray, along with Amazon, Google Play, iTunes and other digital platforms. (Season two will begin on BBC America next April.) Second of all, it doesn’t much matter. Evil people did some sort of cloning experiment in the ’80s, and are now going around the world rubbing out the surviving clones – many plot twists and much gamesmanship to follow. The delights of “Orphan Black” are actually way more basic and moment-to-moment than that, as the show wobbles from hipster self-mockery to flat-out cheese, with plenty of naked flesh, unconvincing stage violence and uneven accent work. For my money, it’s all calculated, not to mention weirdly delicious: Reflect on the fact that when Maslany (who is Canadian) is playing Sarah-as-Beth, she’s being an English woman who’s doing a bad Canadian accent. Her drawly, ironic American-intellectual affect as Cosima, on the other hand, is perfect and utterly sincere.

Also new on home video: John Carpenter’s 1980 horror-thriller “The Fog” might not be the best film of Carpenter’s classic period – we’re talking about the dude who made “The Thing,” “Escape From New York” and “They Live,” after all – but it’s one of the tightest, most economical and most consistently atmospheric pictures of his entire career. It’s also got an utterly delightful cast, with Carpenter’s then-spouse Adrienne Barbeau as a honey-voiced radio siren, Jamie Lee Curtis as a free-spirit hitchhiker and Janet Leigh as a hard-boiled female politician, along with cameo roles from Hal Holbrook (as a priest who grasps a California coastal town’s dreadful buried secret) and John Houseman. West Coast natives will savor the locations – mostly Bodega Bay and Inverness – and horror mavens will appreciate the crisp photography and precise editing, along with the references to Hitchcock’s “The Birds” and Clint Eastwood’s “Play Misty for Me.” Shout Factory’s new Collector’s Edition features a 1080p hi-def transfer overseen by original cinematographer Dean Cundey, and it looks amazing. (Blu-ray and DVD, but no online options I can find.)

I’ve finally found the moment to plug Lithuanian director Kristina Buozyte’s mesmerizing sci-fi puzzler “Vanishing Waves,” which wowed the Fantastic Fest fanbase last year but failed to find much of a theatrical audience. We’re somewhere in the dreamland terrain variously explored by Kubrick, Tarkovsky, David Lynch and David Cronenberg, with a strong overlay of European art-school erotica and a throbbing, humming electronic score. So don’t say you weren’t warned. A neurologist finds a way to pipe himself into the mind of a comatose woman (she’s extremely hot, of course) and finds more than he bargained for. Well, OK, he finds what he secretly wanted, that being bleached-out, long-take sequences of softcore sexy-time in imaginary landscapes. On a purely technical level, this was one of the most beautiful films of 2012. Viewers with the patience for this kind of cinema, and the right cerebral inclinations, will find it intensely rewarding, even if Buozyte’s conventional conclusion is a letdown. The spectacular two-disc DVD release from Artsploitation also includes “The Collectress,” Buozyte’s first feature. (DVD and online video; no Blu-ray.)

For years if not decades, Robert Siodmak’s 1950 film noir classic “The File on Thelma Jordon,” with Barbara Stanwyck as the ultimate scheming femme fatale – murdering her rich aunt at the behest of a sleazeball boyfriend, and then seducing the D.A. (Wendell Corey) to ensure she gets away with it – has only been available on crappy, VHS-era home video transfers or on cable TV. Olive Films finally has a clean, rich and lustrous digital transfer on the market, and “Thelma Jordon” is revealed as one of Stanwyck’s greatest bitch-goddess performances and a hard-hearted, amoral genre masterwork, with cinematographer George Barnes’ black-and-white, long-lens L.A. cityscapes, a romantic orchestral score by Victor Young and an Ur-noir script from female screenwriter Ketti Frings. “Maybe I’m just a dame and didn’t know it,” Stanwyck tells the married, drunken and infatuated Corey. “Maybe I liked being picked up by a guy on a binge.” (DVD and Blu-ray, no online options.)