Ready to marry, but not for "wife"

I'm thrilled to tie the knot, but not about taking on that four-letter word -- and I'm not alone 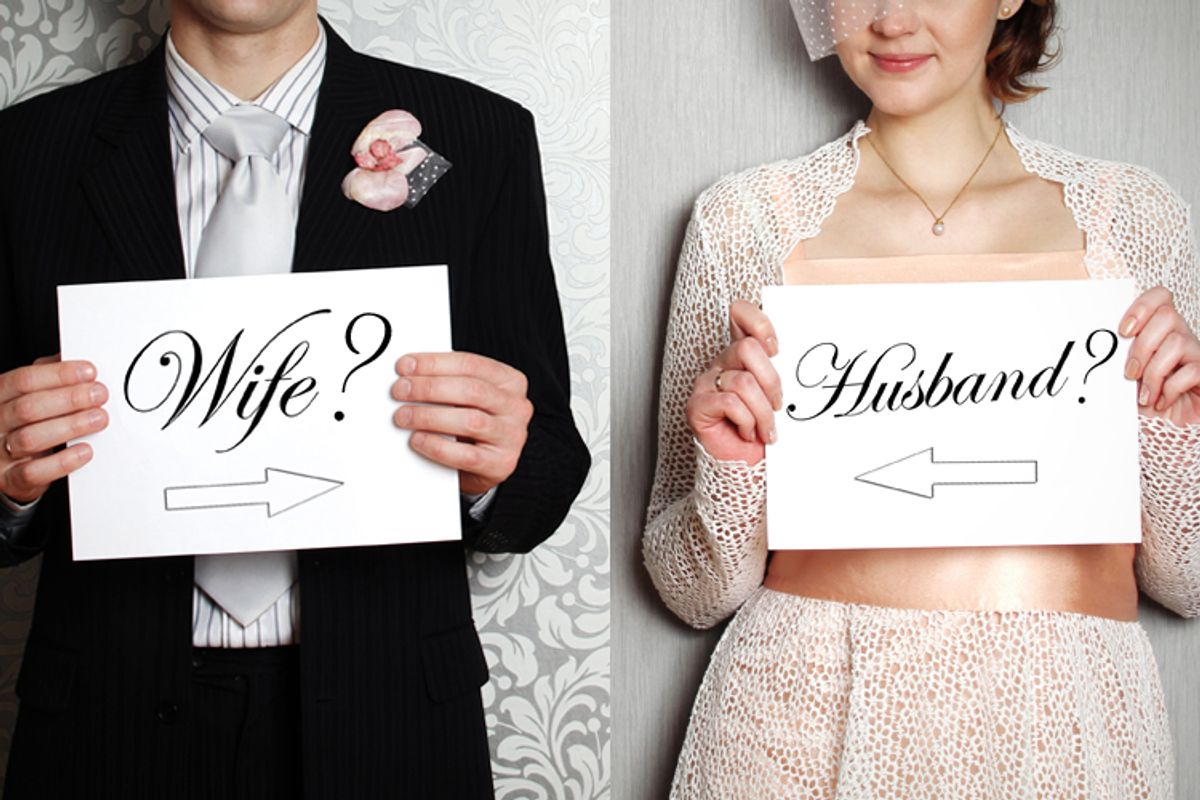 My fiancé and I were going over our wedding plans while tossing back some beers -- as one must -- when we had finally arrived at deciding on the language of our ceremony. We read through sample scripts, wrinkling our noses at the stilted, archaic prose, but none more so than at this: I, ministering by the authority vested in me by blah, blah, blah do pronounce you ... husband and wife.

Husband? Wife? I could barely conceal my gagging sounds. He said something to the effect of, "Ew, gross."

As with many modern couples, we've managed to wrestle marriage from its super problematic history and invest our own meaning into it. (That said, we'd be thrilled to make vows to each other without the legal paperwork -- our commitment to eachother, not to the state, is what's meaningful to us -- it's just that the extra bureaucratic step seems beneficial enough to be worth it.) But we're finding that it's tougher to do the same with "husband" and "wife."

It makes me feel like Betty Draper, like I should be fetching his slippers and a scotch on the rocks -- and remembering to get the roast bird out of the oven. (In reality, I've only just recently expanded my cooking repertoire beyond Kraft mac 'n' cheese and things you put in the microwave. He, however, will roast a chicken and make a rustic tart from scratch -- all in one night.) I am a daughter, partner and friend -- but a wife? I can't help but imagine saying "I'm his wife" with heavy air quotes, a roll of the eyes or exaggerated feminine cheer.

Looking to the etymology of the word doesn't help much. According to Merriam Webster, it derives from "Middle English wif, from Old English wīf; akin to Old High German wīb wife and probably to Tocharian B kwīpe female pudenda." Of course the meaning of the word has since evolved, but certainly for some men "wife" does translate to "this is my vagina." It isn't just the word's historical meaning, though. It's the number of times that I've heard men say with maternal resentment, "Well, the wife wants me home" or "wifey won't let me [blank]."

"Husband" is equally problematic. It feels paternal and possessive. Don't even get me started on the word's etymology: "Middle English husbonde, from Old English hūsbonda master of a house, from Old Norse hūsbōndi, from hūs house + bōndi householder."

As my ... well, let's just call him by his name, Christopher -- as he says, "The fact that there are different words for the roles, depending on your gender, implies that the roles are inherently different," he says. "Like, if it were 'he's my marriedperson, she's my marriedperson,' there would be no implied difference in the tasks each person would be expected to do." (You see? There is a reason I am marrying this person.) "Marriedperson" is awfully clunky, of course, and "partner" feels stilted. I'm fond of calling him "my person," but then that word choice needlessly becomes to topic of conversation whenever I use it.

Elisa Gabbert, a 33-year-old Denver-based writer, tells me, "I've always thought the words 'wife' and 'husband' had a one-way proprietary air -- meaning, when men say 'my wife' I hear an undercurrent of ownership, and when women say 'my husband,' I hear an undercurrent of subservience." But the terms are technically accurate -- she got married four months ago -- so she uses them, but with a sense of "internal irony."

Similarly, Andi Zeisler, co-founder of Bitch magazine, says, "I hate them both, but will use them grudgingly. I'll sometimes use the term 'my mate,' because it sounds companionate. But that's not perfect either, as it makes us sound like penguins." Penguin or pudenda? Take your pick!

Andrew Irwin-Smiler, a psychologist who studies masculinity, tells me, "When writing, and sometimes in person, I talk about 'my sweetie,'" he says. "I figure it's no one's business what our legal status is, nor is it necessarily anyone's business what gender my sweetie is." Then there's "spouse," which Anita Wagner Illig, a 60-year-old who has been married for a year and a half, uses because it's "gender neutral." Others settle on "wife" and "husband" because they can't think of any better terms. "I'm in favor of new terms," says Elline Lipkin, a woman in her early 40s who has been married for five years, "just wish I could figure out what they should be!"

The terms do have their defenders, though. Laura Lasky, a 42-year-old from Arizona, says "wife" and "husband" had very positive connotations in her family. It "was something that felt very honoring and kind, not associated with a feeling of something like ownership or a negative stigma," she says. Although she adds, "There are times I'm triggered by terms which may imply something of ownership or loss of an identity." She and her husband will always introduce each other by name, and occasionally tack on "my wife" or "my husband."

Former Salon columnist King Kaufman says, "I was surprised how much I liked it when I first heard my wife refer to me as her 'husband,' and how much I liked saying 'wife,'" he says. "I'm not sure why. Maybe it made me feel kind of grown up." (He was 34 at the time.) He adds, "The wife and I are both down for smashing the patriarchy, and I've never heard her object to either term, nor do I."

Plenty of folks are happy to divorce "husband" and "wife" from their previous meanings. Hollie McLaughlin, a 25-year-old, says that "wife" is not "a term that dictates my roles or expectations. There are no strict roles attached to that other than the vows we made to each other." Similarly, she uses "husband" but doesn't expect her partner to "to be the breadwinner."

Some same-sex couples, like Eric Anderson and his husband, take delight in using the terms -- "particularly in the presence of Christian bigots," he says. Those two seemingly outdated words can so suddenly become progressive and groundbreaking.

Marriage is being revolutionized -- it's changed from its legal definition to when, or if, people do it. There's no reason the meaning of "wife" and "husband" can't change right along with it. But even as these terms go through an awkward, pubescent flux, I suspect I'll give in to convenience and social pressure. As my future -- let me give this a shot -- husband says, "I expect to use them, because I just don't want to sound like a weirdo."