The beautiful failures of Diana Nyad 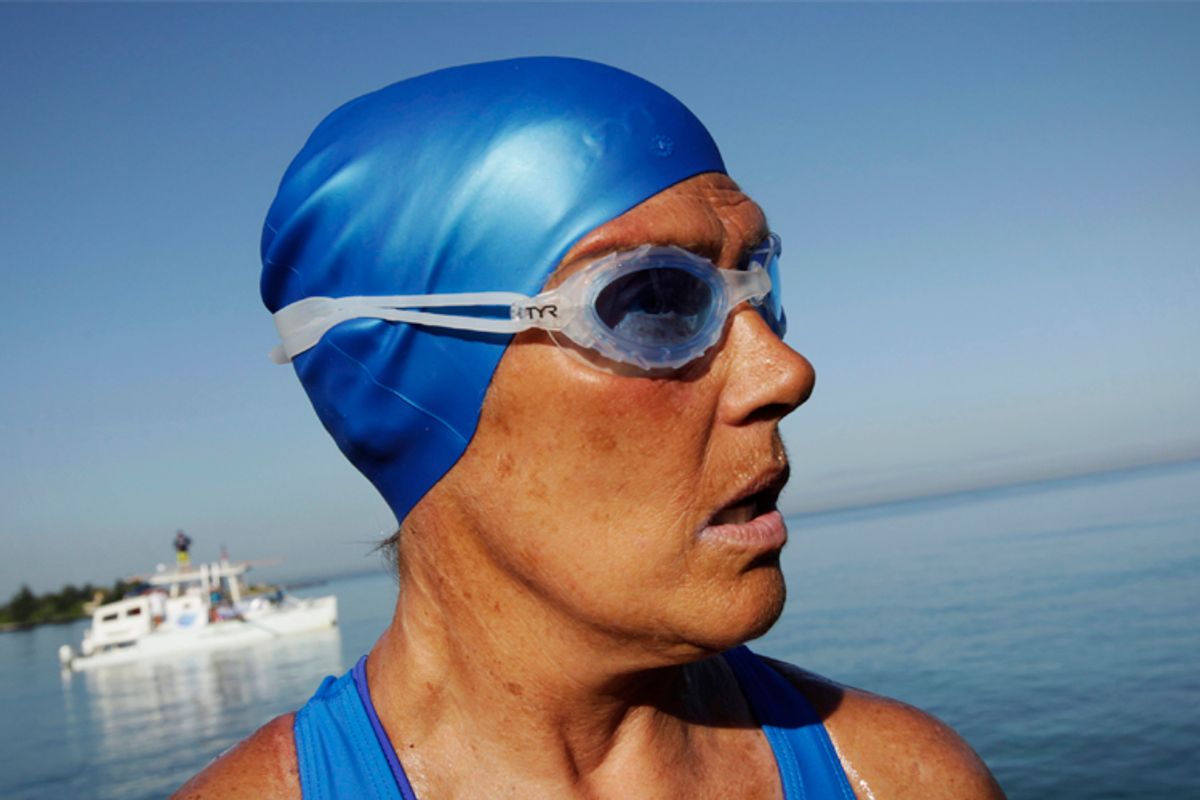 A great sports story often involves an atypical hero, overcoming seemingly insurmountable odds to triumph. But even in the realm of heart-stirring, underdog tales of athletic accomplishments, you rarely get one involving a 64-year-old, openly gay woman. But its uniqueness wasn't all that made Diana Nyad's historic swim from Cuba to Key West, Fla., this week so magnificent.

Nyad is now the only individual – of any age or gender -- in the world to successfully make that 110-mile swim without a shark cage. It was a journey that took her 53 hours to complete -- not including the 35 years of planning and four prior attempts that preceded it. She made her first attempt back in 1978, long before many of the world's top swimmers were even born. By the time she'd accomplished her goal Monday, she'd become the sleeper feel-good story of Labor Day weekend, earning worldwide headlines and congratulations from the president. But before that, her latest attempt had barely registered a news blip.

On Tuesday, I spoke to my friends Jill and Michele, a married Florida couple who met over a decade ago on the swimming circuit. Michele, a U.S. Masters swimming champion, said she'd been unsurprised but disappointed in the coverage of the event. "Sometimes ESPN doesn't understand sports," she said, "and they certainly don't understand swimming," she added, noting a commenter she'd heard Tuesday who'd groused that Nyad's feat hadn't truly accomplished anything. "In the era of $40 million contracts, swimming is such a small part of sports coverage. Does football 'accomplish' anything? Does hitting a tennis ball?"

"She wasn't really on anyone's radar," added Jill, a top 10 Masters relay swimmer. "She was trying again for the fifth time, so there was a lot of eye rolling. Only my swimmer friends were tracking it online. We were watching and texting each other and cheering her on. It was just a beautiful moment."

Nyad worked with an elite team that helped keep sharks and "sea trash" at bay during her swim, but still had to overcome frigid nighttime waters, a jellyfish-sting-preventing mask that cut her face, and a history of four failed previous attempts. She told CNN Monday she'd surged through the worst of it imagining "using her left hand to push Cuba backward and her right hand to bring Florida closer."

Though no one else on the entire planet has ever done what Nyad has, the intensity of her determination is an object lesson for all of us -- not just in extreme physical endurance, but in the profound grace it takes to face disappointment and failure, again and again and again, and to keep going. "Try swimming for just 30 minutes," Jill told me. "I'm a swimmer, and after three hours I think I'm going to go crazy. It's a different thing than swimming in a pool; you don't know what's out there in dark or muddy water. It's not like running; you can't drop down to a walk; you can't really stop your pace. The mental endurance it takes to do that, in the dark, for over 50 hours straight? To have that mental drive -- are you kidding me? She should be a national hero."

In news, we often come in at the story's finish line. We see a blistered and sunburned woman who's just done something superhuman. We don't see the years of not reaching that goal, of the guts it takes to live by Beckett's maxim to "Try Again. Fail again. Fail better." As Jill admiringly remarked on Tuesday, the swim was amazing, but so was Nyad's Herculean pluck. "She was fearless of the failure," she observed. No easy feat, especially in a world where there aren't too many populations less publicly lauded or even noticed than AARP-age females. Yet there Nyad was Monday, a survivor of sexual abuse and jellyfish stings, a woman who two years ago boldly, encouragingly declared that "Endurance is not a young person’s game."

The things that scar us inform us, sometimes for the better. And I want to believe that Nyad's greatest glory isn't that she made it to the other shore in spite of her age. It's that she got there because of it. I want to believe the pain and frustrations of all those other tries before, all the stings along the way, are what carried her to Florida, as I want to believe those are the very same things that carry us all through the dark waters of life. "We should never, ever give up," Nyad declared Monday. "You never are too old to chase your dreams." The key is to keep having dreams, in spite of whatever blows life doles out. Next month, Nyad's doing a 48-hour swim in New York to raise money for hurricane victims. She told CNN Tuesday, "It should be a piece of cake."