As students return this week, there will be teacher jobs cut and mass shootings unaddressed. Here's the big problem 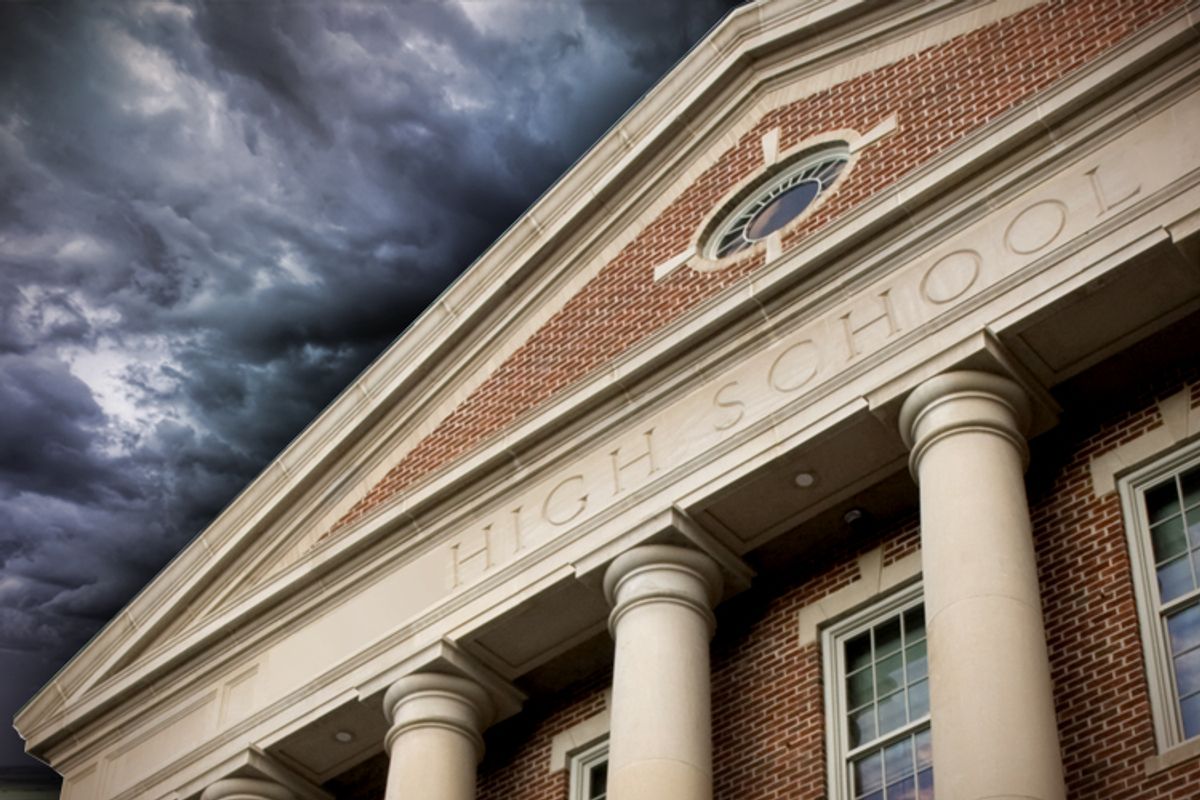 On the Facebook memorial page for Ana Marquez-Greene, one of the young victims of the Newtown, Conn., shooting, her parents posted a picture of her and her older brother on the first day of school last year. The realities of Newtown and its potential to be repeated became apparent in Atlanta two weeks ago when a lone gunman entered a school with a bag full of guns and 500 rounds of ammunition, prepared to massacre a group of elementary school children.

Today marks the start of a new school year. As I reflect on a long and discouraging summer in progressive politics -- capped off by another national non-commemoration of Labor Day, even as service workers strike all over the country -- I am reminded of the kinds of volatile physical and intellectual conditions that shape public school systems in urban areas throughout the country.

In Atlanta, school clerk Antoinette Tuff found herself face-to-face with the gunman, 20-year old Michael Hill who came dangerously close to re-creating Newtown in a Southern, urban, predominantly black setting. For nearly an hour, Tuff used her Christian faith to create a context of radical empathy with the mentally ill Hill, who confessed that he had not taken his meds. Tuff convinced Hill to lay down his weapons and surrender to police, but not before he exchanged a round of gunfire with them. Her act of heroism points to the mostly invisible but incredibly impactful labor that school service personnel perform for students on a daily basis.

Still, her heroism is no substitute for a comprehensive gun control policy in this country. The Tuff-Hill encounter came on the heels of Atlanta Public Schools opting to spend $10.1 million to hire and train 73 armed school resource officers. The first wave of “resource” officers began this year. Such solutions are problematic because they cast the students as a threat, rather than dealing with the broader culture of guns that embolden people like Michael Hill and Adam Lanza.

By contrast, in Philadelphia, school officials have laid off nearly 4,000 teachers, staff, counselors and classroom aides, in addition to closing 23 public schools. Although they could not find $304 million to close the budget shortfall, city officials were able to find $400 million to build a new prison. Chicago students also started school with more than 50 school closings.

In Louisiana, the federal government filed suit against the state for issuing school vouchers to subsidize students attending segregated private schools in districts that fall under federal desegregation statutes. Gov. Bobby Jindal has been incensed at the federal resistance to using public funds to subsidize racially segregated education.

In higher education, states continue to slash the budgets for public colleges and universities in places like Alabama, California and New Jersey, while passing that cost along to young college students, who will be saddled with huge amounts of student loan debt upon graduation. Though I have the fortune of working in a university with a strong union that advocates for all faculty, whether tenure track or not, many of my colleagues at other institutions do not have access to unions. Universities are increasingly relying on adjunct and non-tenure track labor to staff ever-expanding college classrooms. It is nearly impossible to make a living as a full-time adjunct professor, when you are frequently only paid between $3,000 and $5,000 per course, per semester. Moreover, transient adjunct labor creates challenges for departments and programs, particularly in progressive and interdisciplinary fields, like ethnic studies and gender studies.

The defunding of public secondary schools significantly reduces the level of ability of the students who step into my classroom. Although they are generally enthusiastic, students are often poor writers and poor critical thinkers. Many students have a lack of curiosity, which has been disciplined away through years of languishing in poor public schools that function more like prisons than places of learning. Students have often been actively discouraged from asking questions, formulating opinions and taking intellectual risks. Igniting a fire in students, creating an environment that invites them to ask questions, challenging a system that wants to turn them into mindless laborers rather than engaged citizens, is part of the invisible labor that every good teacher does. Good teachers encourage students to think their way in, question their way through, and write their way out.

These are the moments I live for in teaching. It is the reason that I have structured my entire life around being both a student and an educator. Yet, I know as an educator, that if we do not begin to address the structural threats to public education in primary and secondary school, the university will suffer.  So will the nation.

Access to a quality public education at all levels has been a key and consistent pathway into the middle class, especially for African-Americans. Unfortunately, the increasing national disdain for all things “public” is increasingly becoming a barrier for people of color. Public education offers options in the midst of urban contexts that threaten to steal possibility. Universities also participate in this project by creating the ethical and intellectual context for helping the nation to be its best self.

When all of these institutions are under assault, when opportunities decline, when self-actualization cannot be realized through education, work and family, then war-mongering and imperial behaviors become an increasingly attractive option for regaining power, not only in foreign contexts, but also in domestic ones. The creation of an underskilled, uneducated, anti-intellectual citizenry is a threat to our very existence, and we should not stand by and watch it happen.