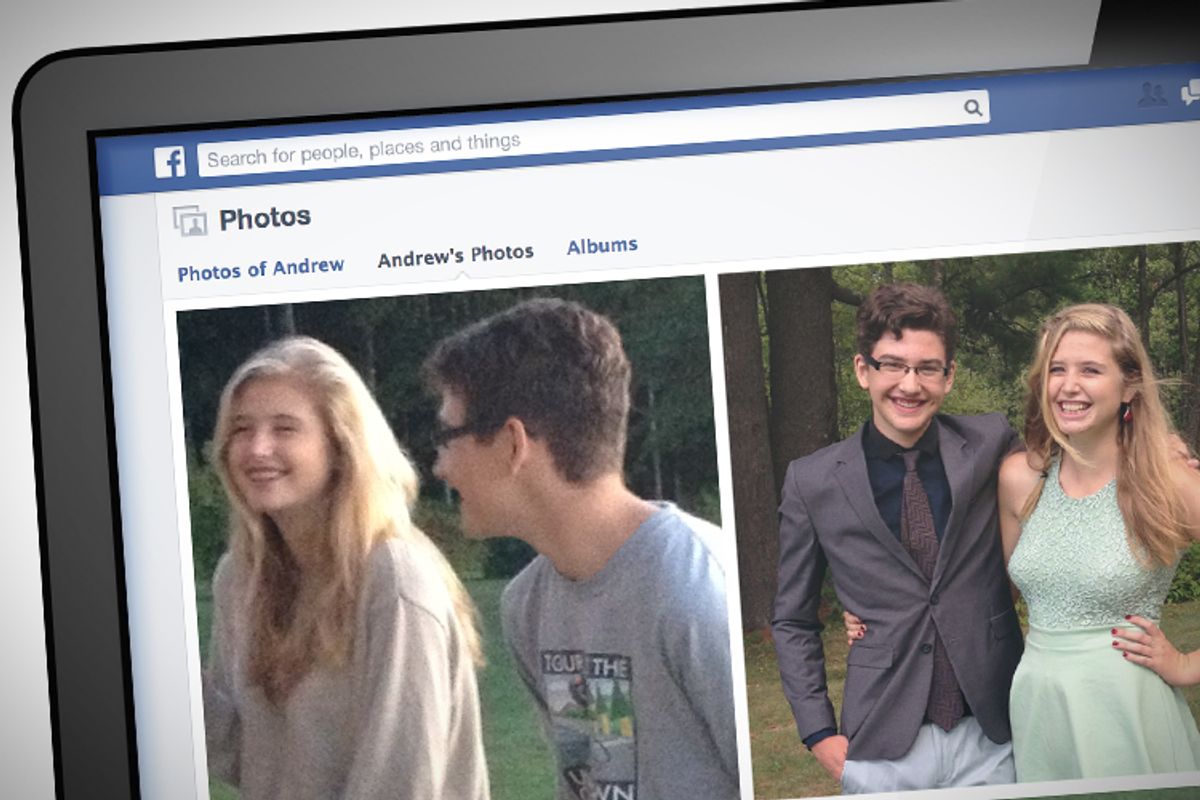 Because I post pictures of my kids on Facebook, writes Amy Webb in Slate, I am a bad parent. Really, really bad. I am, she declares, "robbing" them "of a digital adulthood that’s free of bias and presupposition."

Parents who post about their children are "preventing" them "from any hope of future anonymity" and "creating a generation of kids born into original digital sin," writes Webb. One ballet YouTube video, and the kid is doomed.

While I inevitably bridle against the indiscriminate application of one person's morality upon everyone else, regardless of individual circumstances, I will admit: Webb's critique has a bite. It stings because there is truth buried in her holier-than-thou denunciation of every parent who fails to live up to the author's pristine -- "We post nothing about our daughter online" -- standards. It's true: Every time a parent posts a picture or recounts an anecdote about their child online, it is an invasion of privacy and a potential cause for peer embarrassment.

Webb's larger concerns -- she worries that advances in facial recognition technology and data mining algorithms will mean that the digital trails we create for our children could hurt their college admission and employment prospects -- seem a little over-controlling to me, but I'm not going to entirely dismiss them. Our children will be more documented than any previous generation and it's hard to know how to navigate that. There is much to learn.

But this seems extreme:

Knowing what we do about how digital content and data are being cataloged, my husband and I made an important choice before our daughter was born. We decided that we would never post any photos or other personally identifying information about her online. Instead, we created a digital trust fund.

The process started in earnest as we were selecting her name ... With her name decided, we spent several hours registering her URL and a vast array of social media sites ... On the day of her birth, our daughter already had accounts at Facebook, Twitter, Instagram, and even Github. And to this day, we’ve never posted any content.

When we think she’s mature enough (an important distinction from her being technically old enough), we’ll hand her an envelope with her master password inside. She’ll have the opportunity to start cashing in parts of her digital identity, and we’ll ensure that she’s making informed decisions about what’s appropriate to reveal about herself, and to whom.

I don't care how Amy Webb raises her own children. She has every right to set the most extreme screen time limits in the known universe and refrain from ever whispering an iota of revealing information about her children in any format viewable by the outside world. I suspect she will discover, as her daughter gets older, that a totalitarian top-down approach to how her spawn engage in social media will become problematic as her daughter starts to interact with peers who are largely communicating with each other through various social media platforms. But that's her problem, not mine. That's the great perk of parenthood: You get to decide for yourself how you are going to go about it.

What riles me is the assumption that I and everyone else who posts a baby picture are falling short of the proper standards and dooming our children to a life in the pitiless panopticon. This is, on the one hand, arrogant and obnoxious. And on the other, it completely misses a key reason why so many of us are joyfully sharing our videos and stories and pictures. In doing so, we are strengthening the ties that bind a larger community of family and friends together, embedding our stories and lives in contexts that are larger than those of the individual nuclear family or neighborhood street. Some anonymity may well be lost through this process, but something valuable is also gained; a sense of togetherness that is often missing or attenuated by modern life.

It's funny. Just a few seconds before Webb's story was brought to my attention, I had the following exchange with my son, as he emerged from his room on his way to go to school.

As he plugged in his earbuds, he said, "Dad, I really think this swing/techno music is my new thing." Then he paused. "That's not a sentence I would have ever expected I would say."

"Just make sure you tag me," he said.

The point of this anecdote is not that he didn't regard my Facebooking of him as an invasion, but that he wanted me to do for him exactly what I was doing for myself: share something funny (along with a tip to some cool tunes) with his community.

We need this. Modern society blows communities apart, splits family and friends across continents, isolates us in our cubes, and works us too hard to have as many physically embodied connections with each other as we would like. We're always fighting alienation. Any new parent, I'm sure, recognizes the syndrome. The combined tasks of parenting and earning a living send a torpedo blasting through our real-life social networks.

One meaningful reason why we value social media, even though it is problematic in so many troubling ways, is precisely because it helps us stitch our exploded communities back together, and keeps us in closer touch with the people we love. We're not taking and sharing more pictures right now (by several orders of magnitude!) than at any other time in the history of human civilization because we're all irresponsible tramplers of each other's privacy! We're doing it because it fulfills deep-seated human needs for connection and intimacy. I cherish pictures of my brother's new baby down south in San Diego because I am sadly too far away for regular physical check-ins. I know my sister, who was present at my daughter's birth but now lives on the East Coast, loves as many updates on her niece's activities as she can get. Friends of mine who've moved away, former work colleagues whom I hold dear but now rarely get to see -- we all feel more in touch, more present in each other's  lives when we share anecdotes and pictures of our children with each other.

There are tradeoffs here, to be sure. The generations born after the rise of social media will be the most documented in history. And we don't know how that plays out. Webb worries that a college admissions counselor could see something embarrassing and nix that Ivy League acceptance. But what if the opposite happened, and the stirring discussions of current events on that person's Facebook page happened to be just enough to compensate for an SAT score that was a tad low? Webb worries that kids aren't mature enough to know how to navigate social media. Well, you know what's a really good way to learn? Post something you shouldn't. Learning from one's mistakes is the oldest kind of learning there is.

I'm probably as extreme on the other end of the spectrum as Amy Web is on hers. I post a lot of pictures and stories about my children. I've been writing about them both since the days of their birth, something that I know from personal experience isn't always fully appreciated by those who get written about. I'm certainly not going to advocate in favor of my style for everyone.

But I do try to be mindful. Is this appropriate? Is this too much of a privacy invasion? Is this something that should be restricted to just friends and family? We make context-dependent decisions like that all the time, and the more thoughtful we are the better.

In the end, however, we can't protect our children from everything. The tighter the walls we build around them, the more fragile and brittle those walls will become, I suspect. And who knows: In a world with privacy constantly under attack maybe it's better to raise kids in public than try to hide them away. That way at least they know what they're up against.