The politics of flipping the bird

Anthony Weiner gives the finger -- and the media freaks out 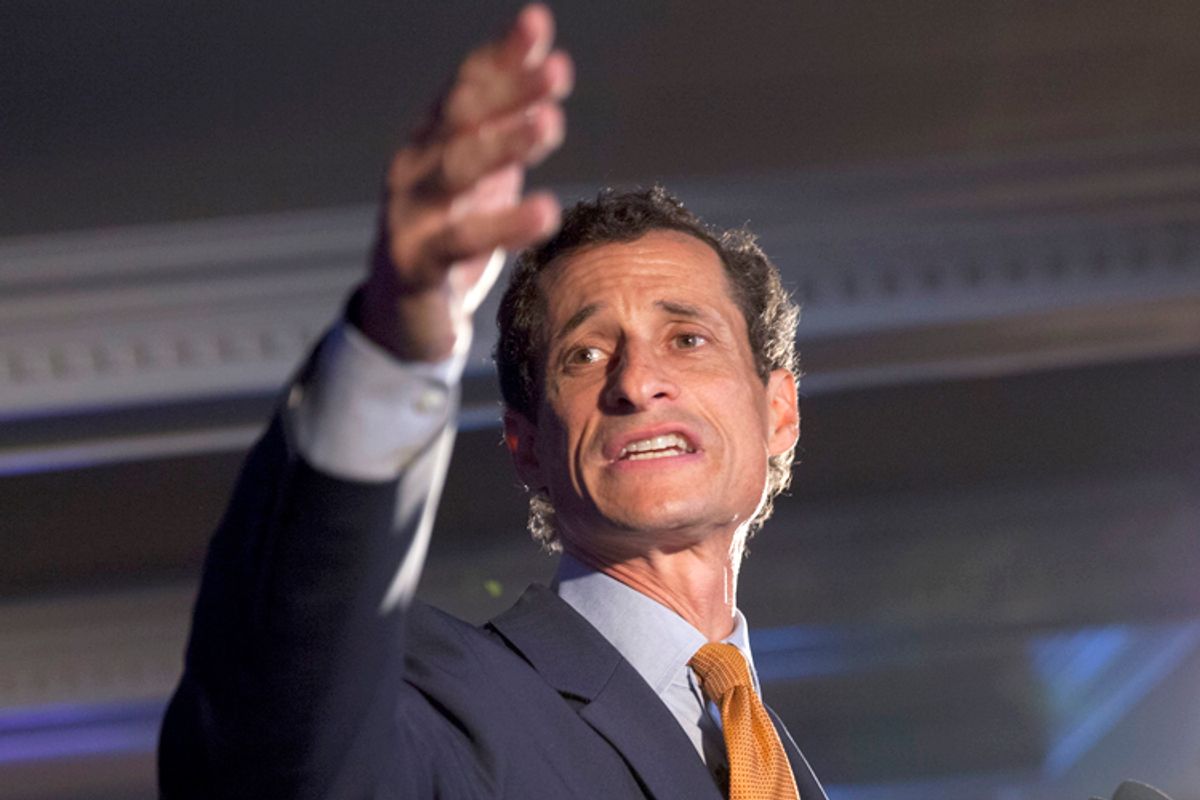 Frankly, I'm relieved any time the guy makes a penis-related gesture that doesn't literally involve his penis. But it did seem rather unsporting when, after finishing fifth in New York City's mayoral primary -- just slightly ahead of the write-in vote for "Your Mom" -- Anthony Weiner capped his astoundingly futile campaign on Tuesday night by flipping the bird at a reporter.

Both NY1 News reporter Lindsey Christ and Brooklyn reporter Kate Rose captured the image of a grim-looking Weiner solemnly flashing his middle finger at the end of a long, crushing day in which his sexting buddy Sydney Leathers tried to crash his campaign party, he had to make an undignified escape through a McDonald's, and oh yeah, the man with more hubris than Kanye had to concede his political career is dunzo. It seemed somehow a fittingly stupid, petulant capper to his entire stupid, petulant campaign, an exasperated, tantrummy display. But on the Weiner scale of gross gestures, that fleeting, blurry image of a digit going by hardly seems a big deal. Nevertheless, several television news outlets, as well as publications like the Daily Mail, refused to show the image at all -- or pixelated the offending finger out. (Because the Daily Mail is all about class and restraint.)

In a climate in which there is so much truly obscene stuff to be outraged about, it's almost quaint that a simple arrangement of one's fingers could make a substantial portion of the mainstream media still go blushingly discreet, daintily shocked. (See also: the hilarious/tragic disproportionate amount of recent attention paid to the televised grindings of Miley Cyrus.) And it's incredibly typical. Last year, M.I.A.'s team had to issue an explanation of "adrenaline and nerves" and getting "caught up in the moment" for her casual bird-flipping at the Super Bowl halftime. NBC, meanwhile, issued a full-on mea culpa, saying, "Our system was late to obscure the inappropriate gesture and we apologize to our viewers." Viewers might accidentally have seen a finger, not surrounded by its fellow fingers! AAAAAARRRGH MY EYES! Unchilled, however, Adele soon after cheerfully issued an "up yours" at the Brit Awards. And just this week, Miami Dolphins player Randy Starks' middle finger made headlines – and spurred demands for explanations. If you're famous, you can't raise a finger without somebody in the media ready to wag a scolding one back at you.

Of course, gestures have power. We speak with more than just our words. But not everything in the world is supposed to be family-friendly – and by the way, like any culturally specific gesture, the middle finger is only as obscene as we choose to make it. It can be plenty family friendly. And if you're delivering the news, go ahead and do it in an authentic way. Unpixelate that finger. Drop that F-bomb. Tell the story as it truly is. The story of Anthony Weiner – dirty text sending, anger-issues carrying, unfortunate Caribbean accent wielding, and seriously delusional former mayor candidate Anthony Weiner – is one of a man deeply defined by his series of ridiculous choices. We all know full well that that finger he lifted on Tuesday night wasn't the most idiotic or obscene thing he's done, not by a mile. It's not so shocking at all. But it's worth showing in its full glory, because in that single uplifted digit, what Anthony Weiner was really doing was finally admitting defeat, and waving farewell to his career.