The left-wing activist who became a Tea Partyer

Brandon Darby went from anarchist to FBI informant and Breitbart protégé. A new movie tries to solve the riddle 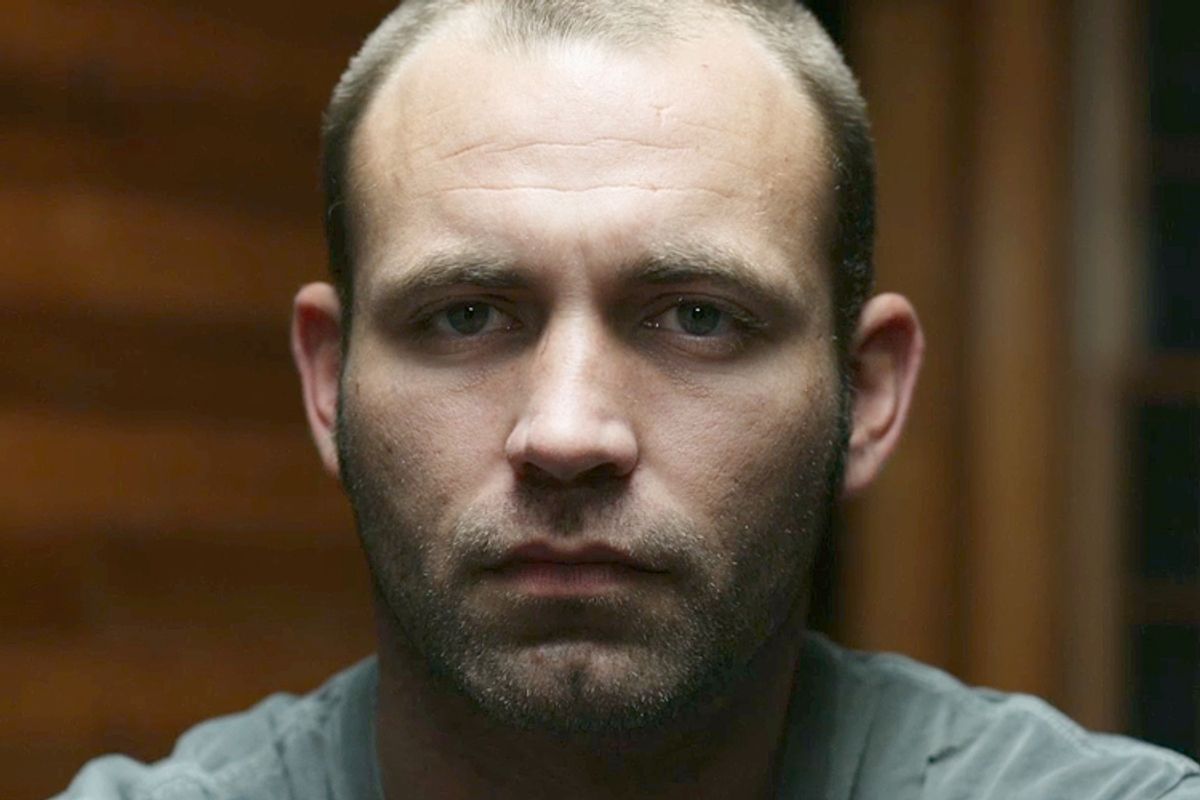 More than enough bandwidth, no doubt, has already been expended on Brandon Darby, the one-time left-wing activist who turned out to be an FBI informant and sent two young protesters at the 2008 Republican National Convention to federal prison. After his self-revelation as a law-enforcement mole, Darby became a protégé of the late Andrew Breitbart and a featured speaker at Tea Party gatherings, where he has spread increasingly far-fetched theories about the perilous and treasonous character of the Occupy movement and other forms of radical activism. He has defended himself angrily against any and all attacks from the left, and has repeatedly sent abusive personal email to journalists he perceives as hostile. (I’ve never received any of these, but I’ve seen them.)

Darby has now been the subject of at least two documentary films and any number of newspaper and magazine articles; those of us in the media keep combing through his story in hopes of understanding what happened, or in search of some deeper meaning that sheds light on our larger climate of political conflict and intensive government surveillance. I plead guilty as charged, obviously, but I also think that the meaning of Brandon Darby’s story is not to be found in Darby himself, a confused and perhaps disordered individual who is more sad than significant. This phrase gets tossed around too often, but Darby was the very definition of a “useful idiot,” an angry young man whose hunger for action and yearning for self-importance became a tool for the national-security state, used to undermine a marginal protest movement and make it look like dangerous terrorism.

If you’re new to the whole Darby soap opera, Jamie Meltzer’s evenhanded and carefully crafted documentary “Informant” tells you most of what you need to know; considered along with the earlier PBS film “Better This World” and Josh Harkinson’s excellent Mother Jones article from 2011, it’s even better. Here’s how everybody agrees the story begins: A self-educated, hard-luck kid from the oil town of Pasadena, Texas, Darby emerged in the Austin anarchist scene of the early 2000s as an ambitious hothead, eager for provocations with the police and full of big talk about insurrection or revolution. Muscular, tattooed and good-looking, he made both friends and enemies rapidly, and apparently had considerable success among Austin's female hipster population.

After Hurricane Katrina hit in 2005, Darby and a number of other Austin radicals, including Scott Crow and Lisa Fithian (both seen in “Informant”), set up an aid and solidarity organization called Common Ground Relief in the Lower Ninth Ward of New Orleans. Common Ground did remarkable work in that devastated community, bringing in food and medical supplies much more rapidly than the big relief bureaucracies, fighting eviction and repossession, and helping residents clean and rebuild their water-damaged homes. No one disputes that Darby’s hard work and personal charisma played a role in that success, although Lisa Fithian (whom I know personally) has said that she never trusted Darby and never liked working with him.

Things began to change for Darby during the two years or so he spent with Common Ground in New Orleans, and exactly how and why that happened remains murky. In “Informant,” Darby tells Meltzer that he came to New Orleans in the first place because of his personal relationships with a group of community activists and former Black Panthers he knew there, and became disillusioned when he learned that these 60-something men were now more interested in operating an Amway-style franchise business than in violent revolution. Darby saw himself as an American Che Guevara, and made a mysterious trip to Venezuela in 2006, apparently to try to raise money for Common Ground from Hugo Chávez’s anti-American government. What happened there, one might say, is a matter of dispute. Mind you, the dispute is entirely between Brandon Darby and himself, since he seems incapable of telling the same story about his Venezuelan caper twice in a row. He has said that he came home after learning that fundraising in Venezuela might be a violation of United States law; he has said that he came home in fear for his life after Venezuelan oil executives tried to get him to hold a secret meeting with FARC guerrillas from Colombia; he has said that he actually met with FARC representatives who wanted him to “start a guerrilla movement in the swamps of Louisiana.”

That part is anyone's guess, but at some point in 2006 or 2007, Darby became an FBI asset. Darby insists on the latter date, but FBI files acquired by his former friend Scott Crow apparently suggest that it was a year or so earlier. Was he recruited while he was still helping to run Common Ground, or during or after his Venezuela visit? Given the FBI’s long track record of successfully “turning” prominent activists, going back to the Panthers, the civil rights movement and the anti-Communist hysteria of earlier decades, it’s not improbable. Some activists in the Austin and New Orleans scenes have suggested that Darby might have been a government-sponsored agent provocateur all along, but that seems unlikely. What’s far more plausible is that Darby’s comic-opera grandstanding, his big talk about confrontation and revolution, seduced law-enforcement officials just as it had seduced his activist admirers. He claimed that he and an army of like-minded anarchists with homemade riot gear were going to shut down the Republican convention, and the FBI swooned.

At any rate, by early 2008, when Darby began to hold Austin coffeehouse meetings with younger activists planning to demonstrate at the Republican convention in St. Paul, Minn., that summer, he was filing regular reports with the FBI. Everything that happened after that must be considered in that light. Bradley Crowder and David McKay, the two young men who would ultimately plead guilty to building Molotov cocktails (with materials purchased at Wal-Mart) and storing them in a St. Paul house where they were crashing, had to retract claims that Darby had entrapped them as part of their plea deals. But entrapment is a legal concept, and what we’re talking about here is more like masculine peer pressure and moral suasion.

Crowder and McKay were brand-new to activism, idealistic kids from George W. Bush’s hometown of Midland, Texas, who viewed their more experienced idol with starry-eyed adoration. When they first met Darby, he had berated them to eat meat, bulk up, work out and not be “pussies.” They’d never be ready to bring down the system if they didn’t toughen up like him, he said. Numerous people who have known Darby over the years have said that he always wanted to be the most militant voice in the room, and frequently encouraged or proposed acts of violence. As Meltzer’s film makes clear, the question of whether Darby actually told his young friends to build bombs is less important than whether the idea would ever have occurred to them in the first place if he hadn’t been there. To my eyes, the answer is clear.

Crowder and McKay have served their sentences in federal prison and been released, and Brandon Darby is now a traveling circus act on the Tea Party circuit (and not necessarily a top draw). His story is about several things. It’s about the longtime left-wing tendency to go weak at the knees before charismatic leader types who spout fiery but empty rhetoric – a tendency shared, to be sure, with zealots on the right. It’s about the immense eagerness of much of the media and public to believe that marginal resistance movements who reject the mainstream political consensus and the narratives of power present a terrifying threat, perhaps as a way to avoid thinking about things that are really frightening.

It’s hardly at all about Darby himself, who seems to disappear more completely the more he talks. If he’s telling the truth – and I suspect he can no longer tell how much of his tale is fabricated – he has convinced himself that he did what he did for honorable reasons. I was offered the chance to interview him for this story, and I’m exactly the kind of journalist who’s always looking for the “personal angle.” Frankly, I wasn’t interested. You can hear Darby tell his side of the story at considerable length in “Informant,” and his semi-tortured self-justifications don’t add up to anything. He was a delusional jerk as a left-wing activist, exactly the kind of domineering personality that gives movement politics a bad name, and he’s a delusional jerk today as a repentant right-wing patriot. Let this movie give him his last bite of the apple, and he’ll be gone forever.

"Informant" opens this week at the Film Society of Lincoln Center in New York and Laemmle's Noho 7 in Los Angeles. It opens Sept. 20 at Time and Space in Hudson, N.Y.; Sept. 27 at Zeitgeist in New Orleans and the Hollywood Theatre in Portland, Ore.; Oct. 4 at the Music Box in Chicago and FilmBar in Phoenix; and Oct. 25 at the Roxie in San Francisco, with more cities to follow. It's also available on-demand from iTunes.