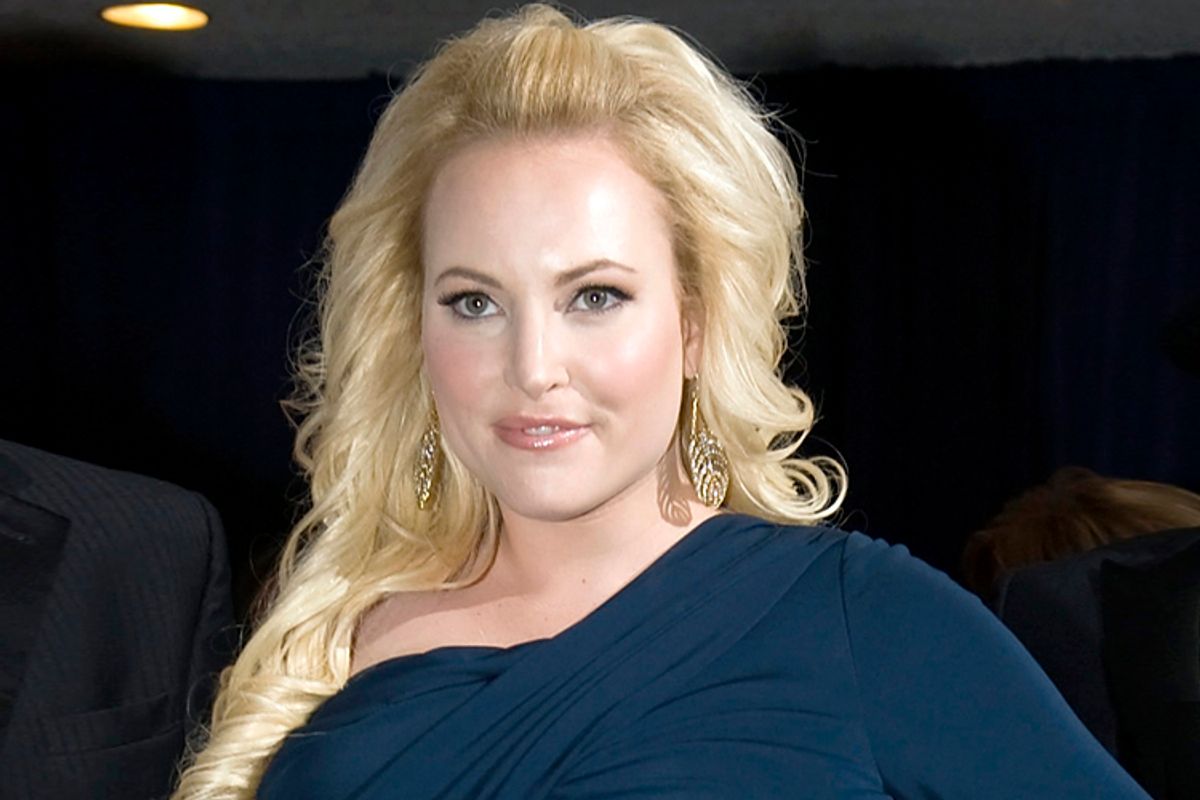 Millennials, the generation that came after Gen-Y and is nebulously responsible for the success of Twitter, debit cards and *NSYNC, are as easy to mock as they are to use as a marketing metric.

And, until I saw "Raising McCain," I had thought millennials got a bad rap.

The series, which debuts on the new network Pivot TV this Saturday, is a combination talk show and unscripted series -- half "The View," half "Sarah Palin's Alaska." It follows the exploits of one Meghan McCain, the daughter of the current U.S. senator from Arizona and one-time presidential nominee John McCain; she alternates between interviewing her guest and showing a slice of what it is like to be the daughter of a U.S. senator who lost the presidency in a landslide. She has been given 30 minutes a week on an aspirant cable network to prove that she has nothing to say.

Meghan McCain is the epitome of what it is to be not a millennial -- a group of individuals of multifarious racial and class backgrounds -- but the media perception of a millennial. The media wished that millennials, as a group, could be self-absorbed, entitled and unimaginative; Meghan McCain rose to the challenge.

Prior to the release of her current series, Meghan McCain was a columnist for the Daily Beast; her columns for the site, for which her last piece ran shortly after the last presidential election, included such pieces as "Yes, I Wear Fake Hair" and "The GOP's House Hottie." She interviewed Snooki, too!

Obsession with pop culture: Check! We're well on our way to filling out the millennial scorecard. Prior to her present engagement with Pivot, when pressed on anything more troubling than "Jersey Shore" or her apparently ongoing and one-sided feud with the Palin family, McCain defaulted. (To her credit, she has spoken out consistently on behalf of gay rights; such speaking out, however, has generally tended toward the self-aggrandizing, as in her memoir of martyrdom "Dirty Sexy Politics" or her posing for a glam photo shoot to ... benefit ... gay people ... somehow?) Asked, on Bill Maher's "Real Time," to defend a point she made criticizing the Obama administration in the context of the Reagan years, McCain replied, "I wasn't born yet, so I don't know."

This was not exactly calling up the ghost of Franklin Pierce. McCain was born in 1984, during the Reagan administration, a period of history about which information is readily available -- particularly to a self-styled Republican pundit who has far more access than most Americans could ever dream of.

On its face, nepotism is not worth crying over; it's the unfortunate way of the world. Most Arkansas schoolchildren don't end up profiled in Vogue and helping to run global foundations, and yet Chelsea Clinton seems a serious-minded person. Good for her! (Other such cases of nepotism are much more frustrating -- but at least, unlike McCain, Luke Russert has stuck with his position as an MSNBC on-air personality!) And yet McCain's apparent belief that she deserves a seat at the table -- that her thoughts, such as they are, ought to drive the national conversation -- shocks the conscience. It is the hauteur that only a millennial could possibly possess.

I recognize that this reads as harsh. But the second episode of "Raising McCain," which I have seen, features a lengthy discussion of feminism, which McCain dismisses as irrelevant to the women of today. The episode, already savaged by the New Yorker, features McCain arguing that feminism out-of-hand is irrelevant to the women of today. If you want to be sexy and fun, McCain alleges, feminism is an outmoded model. “Who doesn’t like getting attention from the opposite sex?” she asks.

Ironically, in presenting her observations about feminism as a broken model (as have many celebrities before her), McCain is parroting decades-old received wisdom. "This is the scene that has permeated news media as well as pop culture about feminism since pretty much the late '70s," said Jennifer L. Pozner, the founder and executive director of Women in Media and News.

"The most unsexy thing in the world is to recycle 40-year-old stereotypes."

When McCain decides to rebrand feminism, at episode's end, as something fun and sexy that she's made up, she's actually just talking about ... regular old feminism. Her blindered willingness to presume nothing happened when she was born -- and even for parts of her lifetime -- is precisely the millennial self-centeredness critics in the media presume of all in this generation. The first episode -- about privacy in the surveillance age -- is somewhat less objectionable, though McCain interrogates her guest about the degree to which her enemies might be able to detect her movements. What -- is the real hair movement finally striking back against that Daily Beast column where McCain admitted to wearing a weave?

It's easy to make fun of millennials. It's even easier to do so when one presents herself as the earnest spokesperson for a generational shift -- and does so by repurposing old and erroneous ideas as her own and adding no value to jobs earned solely on the back of dad's name.

Remind me why we all make fun of Lena Dunham again?