The retailer said it would connect D.C.'s poorest residents to healthy food. It doesn't look that way 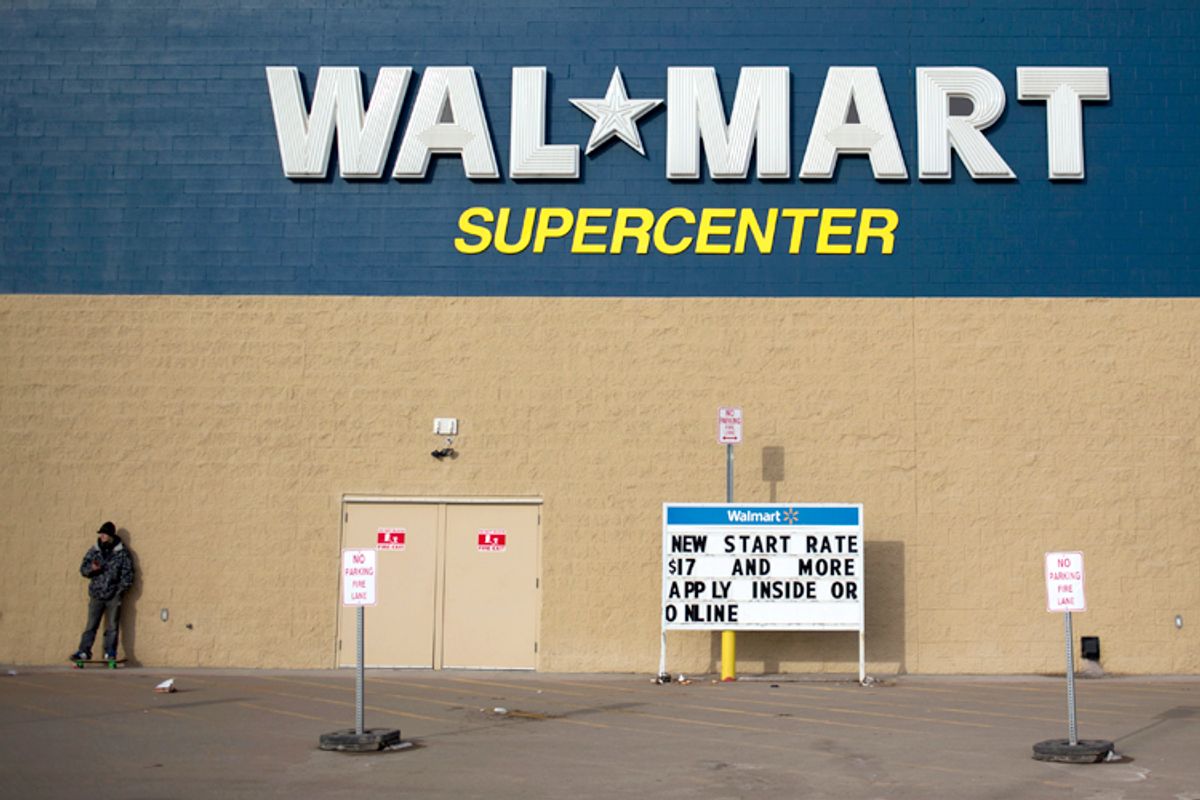 This week Washington Mayor Vincent Gray vetoed a bill that would have directed Wal-Mart to pay a living wage at proposed stores in the District. With the bill’s future hanging in the balance, it’s time for a discussion of the U.S. retail behemoth’s  strategy.

For decades, one of the most vexing issues in the U. S. has been that the "inner cities" — largely code for the areas where poor people live — have been devoid of food stores selling fresh, healthy foods. Some years ago, Wal-Mart set out to solve this “food desert” problem, the common observation that in many poor areas it’s almost impossible to find nourishing groceries.

The root cause of this problem has been ascribed to a variety of causes.  They range from large supermarket chains fearing for the safety of their employees, the low odds of turning a profit in these locations, worries about tarnishing the brand and, finally, outright discrimination.

In pursuit of a remedy, many possible solutions have been tried. The U.S. federal government, at least since the Clinton administration, has pursued campaigns to promote healthy eating, aimed especially at poorer households.

U.S. foundations and NGOs galore have come up with ideas that appeal to the nation’s civic spirit, reason and/or sheer humanity.  City councils have been trying to use local regulations to induce supermarket chains to locate stores in the economically weaker parts of town. The outcome to date is dispiriting.  According to estimates, 23 million Americans live in so-called food deserts. That's about 7 percent of the entire U.S. population, a pool of people (and customers) who by themselves would constitute the 49th largest nation on earth.

Is Wal-Mart coming to the rescue?

The company saw this issue as a strategic opportunity to address two problems simultaneously:  First, its customers, generally from below the median income level, are suffering economically from the prolonged effects of the recession.  As a result, Wal-Mart had to battle something rare in its corporate history: a long string of quarters with stagnating or declining same-store sales.

Second, a coalition of urban liberals, union representatives, local city council members, city planners have effectively stymied Wal-Mart’s efforts to expand its big box superstores into America's large cities. But Wal-Mart has repeatedly proven itself to be a determined adversary. It sees every challenge, no matter how big, as a mega-opportunity.  That core creed makes it the quintessential American company.

Against that backdrop about two years ago, Wal-Mart developed a plan that essentially boils down to eight steps.

Its goal is a clever gambit to simultaneously solve the problems of the urban food deserts. As Wal-Mart executives -- including some hired from the Clinton administration -- were busily telling everyone who wanted to listen, that developing an urban presence became a mission-critical endeavor for the company as it faced sales stagnation.

Unless it manages to win much wider acceptance from consumers at the median income level and above, it is destined to deal with a customer base that's tapped out in terms of income. A greater presence in New York, Chicago and Washington could help it reach a more affluent customer base. Tying its efforts to gain new customers with an initiative to help the poor looked like a fair deal.  It almost seemed like magic.

The company has become familiar with this role of benevolent dictator.  When it makes up its mind on a progressive cause (such as the environment), it can implement policies that have been under discussion for eons.

In the annals of U.S. corporate history and those of public policy, Wal-Mart is a true standout.  Even Bill Clinton, with his considerable political skills, must be impressed. Has there ever been a company that has positioned itself as a more skillful practitioner of his brand of triangulation.

But earlier this summer, Wal-Mart’s D.C. strategy seemed to be falling apart.

Wal-Mart had long regarded the District of Columbia as a ripe candidate for its expansion plans.  The mayor had courted the retailer, which had developed plans to start construction at three locations in two of the D.C. wards where middle- and lower-income people live. Yet, just as the D.C. City Council voted on a bill requiring very large retailers like Wal-Mart to pay their employees a wage of $12.50 an hour, the company’s lobbyists descended on city government offices.

Faced with that demand, Wal-Mart has threatened to cancel all its plans to have stores in the city.  The reason is simple: Wal-Mart’s secret to success is that it has fought unions, benefits and anything but the lowest possible pay rates, wherever it operates.

It’s clearly not that Wal-Mart doesn’t have the money to pay its “associates” in D.C. a fair wage.  The issue is the power of the precedent.  The company must fear that, if it gives in in Washington, a wave of similar demands would swell up around the nation.  That would get costly – and, it will argue, eat into the company’s profitability and stock price.

As so often happens, Wal-Mart can count on politicians to come to its rescue.  After Mayor Gray’s veto, the living wage proponents of the living wage bid are just short of the nine out of 13 votes necessary to override that veto.

Mayor Gray may justify his veto with the food desert trap. But it doesn’t hold up.

The three stores in D.C. that are under construction are not in the city’s poor areas.  They happen to be in places where many students and young professionals live. Wal-Mart has identified the college market as an attractive one. And it knows that reaching it will allow the store to build ties with a new generation of customers outside its traditional demographic.

Call Wal-Mart cynical, smart or both: The fact is that it held back on breaking ground in the desperately poor areas of town, where the real food deserts are.  That strategic delay now gives the company the momentum to demonstrate what it is really about: It gets its way, on its own terms and nobody else’s.