The college class that could reveal your real father

College students are testing their own DNA, but the results — from paternity to genetic diseases — can be a shock 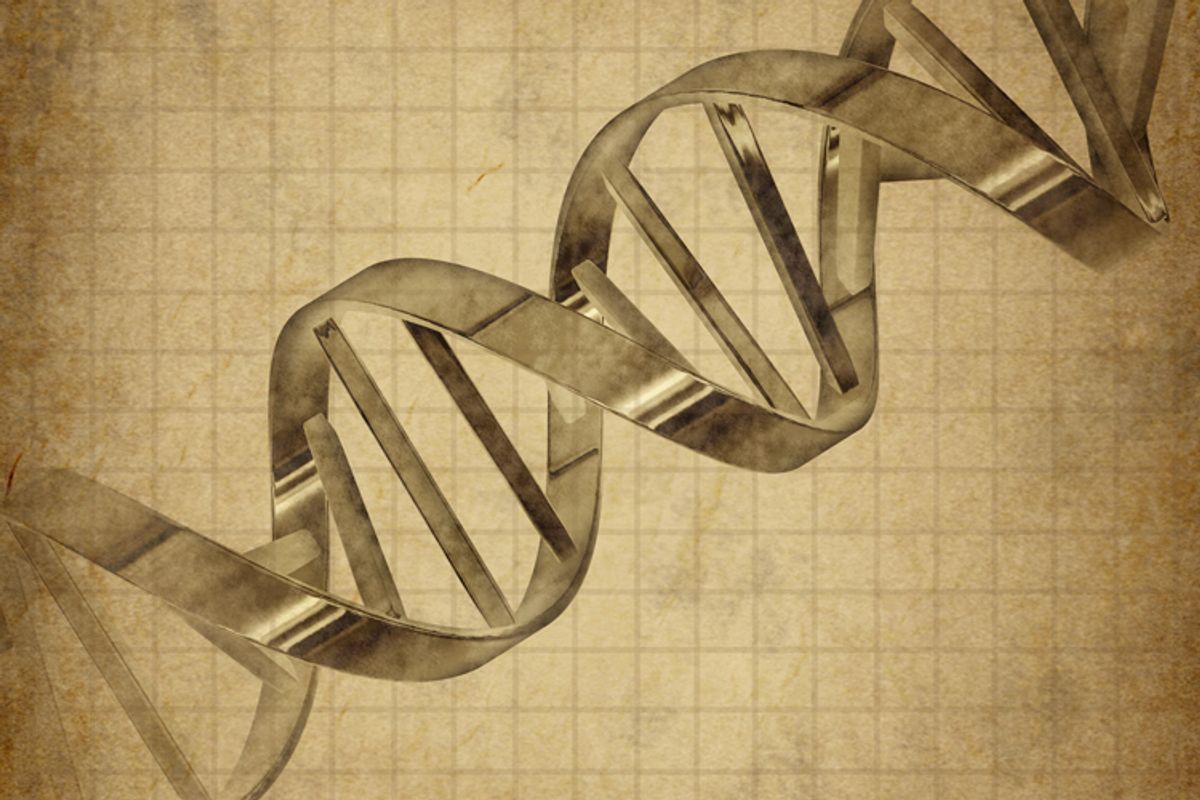 Gergana Vandova received her DNA spit kit for Christmas. It was a present from her husband. A tool that makes it possible for you to glimpse your genetic blueprint is a rather geeky holiday gift, admitted Vandova, a biochemistry Ph.D. student at Stanford University.

But it was the perfect present for the 27-year-old, who wears purple eyeglasses with an outer space motif. After getting her results, Vandova signed up for a Stanford genetic course that allows students to test their own DNA in order to understand her results better. Originally she had worried that they might show that she was at increased risk for developing Alzheimer’s disease or breast cancer. Instead she found out she was a carrier for cystic fibrosis, a life-threatening genetic disorder that affects the lungs and digestive tract. Because cystic fibrosis is an autosomal recessive disorder, a person must have mutations in both copies of a gene to develop the disease. When only one copy of the gene carries the mutation, the person is a carrier. Vandova won’t get the disease, but depending on her husband’s status, their future children could.

Forget worrying about the “Freshman 15” -- now college students can find out if they are at increased risk of developing certain forms of cancer. Undergrad sweethearts can learn the odds of their offspring having cystic fibrosis and sorority sisters can learn if they have a biological sister out there. All of which is raising difficult medical, ethical and privacy concerns.

“You don’t go to chemistry or math class and walk out finding that your father is not your father,” said Roxana Daneshjou, a 25-year-old medical/Ph.D. student who took the Stanford course.

The company doing most of the testing, Silicon Valley-based 23andMe, doesn’t keep exact data on the number of educational institutions that use its DNA kits. But they receive about five inquiries from educators each week and are in contact with an average of 120 instructors and teachers a year, said public relations manager Catherine Afarian. A number of high schools have expressed interest and 3,000 people have already preregistered for a fall genetics class through online educator Udacity. As these courses become more common, no one really knows how the students and society at large will react to what they reveal.

Stuart Kim and co-founder Dr. Keyan Salari designed Stanford’s Genetics 210 - Genomics and Personalized Medicine course for both medical and non-medical students in 2010. For Kim, a professor of genetics and developmental biology at Stanford School of Medicine, it was a way to make human genetics “more engaging.” Instead of learning dry tables and statistics, students learn that they are at low risk of developing type 2 diabetes or high risk of developing cardiovascular disease. Kim theorized that the personal element would aid students in their comprehension. Salari’s limited initial research backs him up: Students in the original 2010 class who underwent personal genome testing both self-reported and demonstrated better understanding of genomics.

Genetics 210 students are not required to test their own DNA and are provided with access to a genetic counselor and psychiatrist. They are walked through the informed consent process and discuss what they might learn and possible legal implications. Although the elective is open to undergraduate and graduate students, the majority of the Genetics 210 students are graduate students. They also tend to test their own DNA. Who tests and who doesn’t is supposed to be kept secret. But because Stanford pays for the testing, Kim knows how many choose to test from the cost and the number of students he has in each course. In his most recent course, all students tested their own DNA. By the same method, he also knows how many have visited the psychiatrist in the four courses he has held — none — and how many have consulted a genetic counselor — two.

Before the first course was held in 2010 a task force of lawyers, ethicists, physicians, faculty members and other experts was established to weigh the issues they felt were important: privacy, security, ethics — none of which the younger students seem too concerned about, said Kim. Of the several hundred students Kim has taught, he is pretty sure some of them have discovered they are at increased risk of developing Alzheimer’s disease. The 23andMe kit tests for variations of the apolipoprotein E gene found in 15 percent of the population that increase risk of developing Alzheimer's. But no one has spoken with Kim about it.

Another result, a variant of the LRRK2 gene that predicts Parkinson's disease, a degenerative disorder that leads to tremors and difficulty with movement, has also not come up on a personal level. But paternity has. Kim had a student who thought he was a gentile but learned through the test that his father was Jewish. The student's mother subsequently revealed that the man who had raised him was not, in fact, his biological father.

“He came up to me at the end of class one day and explained this all, “ said Kim. “I was sort of there with my jaw dropping down [...] because this is the most extreme change of life that happened in the class definitely.”

It's these social implications that University of Iowa pediatrics, epidemiology and biological sciences professor Dr. Jeff Murray thinks will be more of an issue in the future than any medical ones. The federal Genetic Information Nondiscrimination Act of 2008 protects against discrimination by employers or health insurers based on genetics. How genetic information will affect life insurance, long-term care and law enforcement is still uncertain. But Murray, president of the American Society of Human Genetics, worries more about the family secrets. As more and more people enter their personal data in the databases like the one at 23andMe, they will be able to discover who else among 23andMe clients they are related to and in what way. Right now 23andMe has more than 350,000 customers, but a price slash to $99 for the spit test and a new ad campaign will probably increase the numbers rapidly. As that happens, Murray believes there will be “lots of non-paternity that’s going to be exposed.”

While information about disease risk can be disturbing, Murray is careful to point out it is not definitive. The tests are not a complete sequence of the genome and offer only an estimate of risk, not a diagnosis. Murray has tested himself three different times in the last half decade and his health risks have changed from increased to decreased, and vice versa, as more scientific data has become available. At this point family history is probably still more revealing than anything the test shows, he said.

Still, Murray weighed carefully the decision to view his own Parkinson’s results. On the 23andMe test there are certain “locked” categories that require additional feedback before results are revealed. Parkinson’s is one of them. Murray's brother had developed Parkinson’s before age 50 and Murray wasn’t sure if he wanted to see his own results. His wife didn’t want him to. His daughter did. One son told him not to look; another told him it was his choice. Murray won’t reveal his decision, only that it was an extremely hard one to make.

“Once you’ve opened it up you can never close it,” he said.

It is in part this irreversibility that led Duke Law genome sciences & policy and law professor Nita Farahany to caution students about testing. There are still so many unknowns, she said:  uncertainties about the likely development of genomic information as well as affordable healthcare. While today’s college students are used to giving up privacy in social media, they may not realize the impact of giving up their privacy regarding genomic information, said Farahany.

“I think that it’s not wrong to introduce students to this option,” she said. “But there’s a burden as an educator to give a complete picture about what the risks and benefits are of doing a 23andMe profile, or doing genetic testing at a young age.”

As a medical student, Roxana Daneshjou took Genetics 210 because she felt genetic testing was something she would have to confront in her medical practice. She had heard about doctors being shown 23andMe results by their patients and not knowing how to respond. Like 90 percent of 23andMe clients, Daneshjou allowed the company to use her results for research. She believes this open sharing attitude toward genetic information that seems new now will become ordinary soon, in the same way that the sharing of personal details on social media has.

She also believes that the pharmaceutical information revealed by the tests will prove more useful than the disease information. Genetic variations can influence drug doses, making it possible for doctors to more accurately calculate individual doses of certain medicines. Daneshjou discovered that she has a genetic variant that makes her more sensitive to a certain blood thinner, something she shared with her mother, who may have the same issue and whose age makes it more likely she will need to use the medication in the near future.

Because the results of genetic testing can be relevant to a patient's family members as well, the decision to test is not always a personal one. For Thomas Roos, a 27-year-old Stanford epidemiology Ph.D. student, that was especially true. Roos is an identical twin. He and his twin Andrew share the same genes, and both chose to test themselves. But if they hadn’t been in agreement on knowing their genetic details things could have gotten complicated, especially since one of the things they discovered is that they each have a variant of the apolipoprotein E gene that increases the risk of developing Alzheimer's. Roos wasn’t particularly upset by the finding, in part because he has no family history of the disease.

“It’s something I think in the future, as I get older, I’ll maybe pay attention to more if I’m starting to get some of the signs of neurodegenerative disease and Alzheimer's disease,” he said.

A result that affected him more immediately was the discovery that he is at increased risk for some soft tissue and ligament injuries. He has since incorporated more stretching into his triathlon training. On the positive side, he is at decreased risk of developing cardiovascular disease, something that made him feel slightly safer, but he does not see changing his behavior.

One of the early concerns regarding testing was that people who learned they were at decreased risk of a disease would take more risks, a fear that does not seem to have been borne out by studies, said Colleen McBride, chief investigator in the social and behavioral research branch of the National Human Genome Institute.

Gergana Vandova said neither the result that she is at increased risk of developing type 2 diabetes or that she is at decreased risk of developing Alzheimer’s disease changed her behavior. But the information about cystic fibrosis did have an impact. Not long ago her husband tested himself though 23andMe and told her he was most likely not a carrier for cystic fibrosis. Because 23andme only tests for the most common mutations, there is a small chance he is a carrier of a more rare mutation. He hasn’t shown her the rest of his results. They have been together since high school, but she doesn’t know his genetic data, proving there may still be some hope for privacy after all.

Correction: An earlier version of this story misstated how 23andme tests for cystic fibrosis. The company tests only for the most common genetic mutations.