"Thanks for Sharing": Sex addicts of the world, unite! 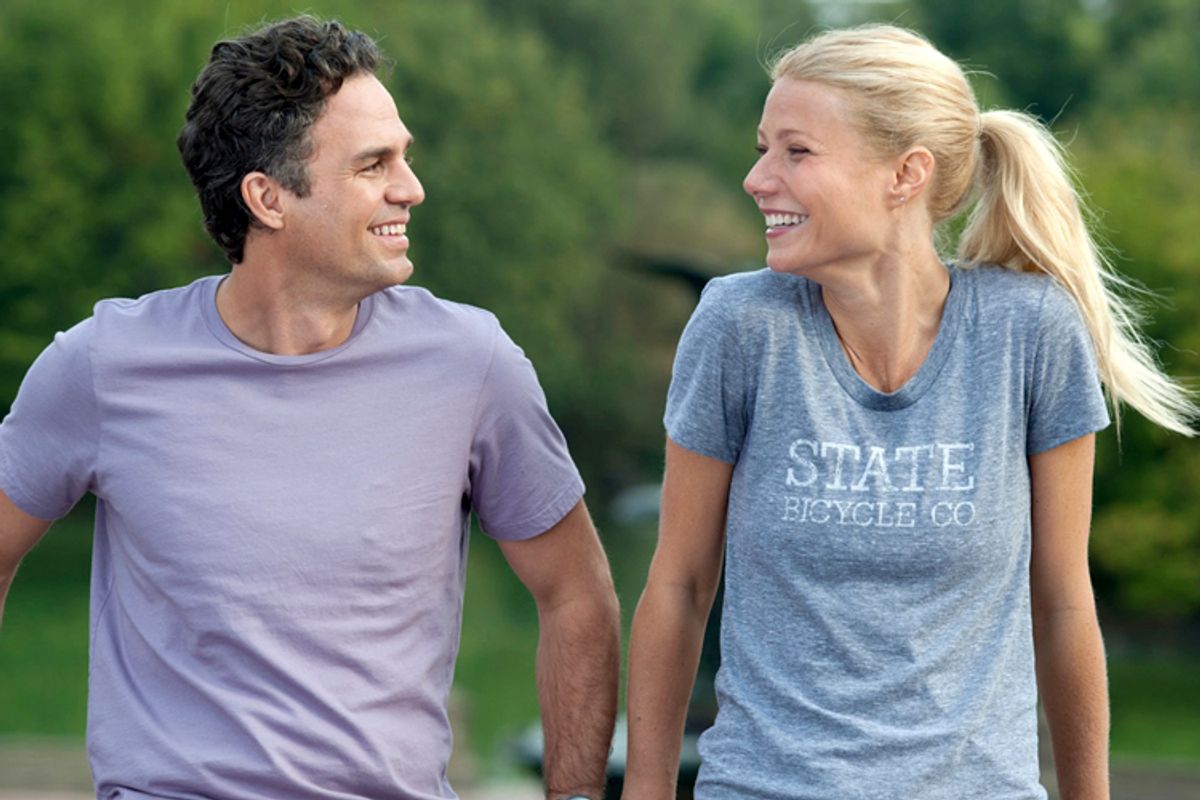 Anyone with a soft spot for big, lumpy, ambitious ensemble movies that try to smush in every possible emotion and every possible genre should proceed with a mixture of eagerness and caution toward Stuart Blumberg’s directing debut, “Thanks for Sharing.” I’m definitely looking at you if you’re an admirer of Kenneth Lonergan’s almost-great post-9/11 opus “Margaret,” or if you contend that James L. Brooks’ movies haven’t necessarily gotten worse, only less popular, or if you have secretly watched the Jake Gyllenhaal-Anne Hathaway rom-com flop “Love and Other Drugs” more than once. (I know, me too. It keeps getting better and worse at the same time!) And of course, yes, there was that Oscar movie last year with Jennifer Lawrence and Bradley Cooper wearing a garbage bag, which I reviewed very positively at the time and subsequently pretended to dislike.

I am powerless to control my addiction to this kind of talky, theatrical, pseudo-therapeutic picture, which doesn’t mean – as with other kinds of addictions – that I’m entirely happy about it. Anybody who’s done time in or around a 12-step movement will immediately understand that the title of Blumberg’s film is highly specific: It’s what you might say, with or without some degree of irony, after someone in your circle has told their self-aggrandizing and/or self-hating story about all the wretched things they used to do (and are likely still doing) and how they’re handling the whole “one day at a time” business. I have the uncomfortable but compelling feeling, in fact, that “Thanks for Sharing” is drawn from life, and that one or more of the characters are based on the writer-director. (Blumberg is best known for co-writing the Oscar-nominated screenplay to Lisa Cholodenko’s “The Kids Are All Right,” and wrote this one with Matt Winston.)

In “Thanks for Sharing,” Mark Ruffalo and Tim Robbins play two longtime members of a 12-step group for sex addicts who will – big spoiler ahead! – face numerous crises and emergencies despite their years of alleged sobriety. I can’t claim I didn’t learn something from the fascinating portrayal of this particular recovery movement. I didn’t know, for instance, that “sobriety” for sex addicts doesn’t just mean abstaining from non-monogamous interpersonal action, but may also include no TV, no Internet, no cellphones, no riding on subways or buses and no masturbation. As Robbins’ character, a Brooklynite named Mike with working-class roots who appears to own an entire brownstone (yes, definitely possible, but not explained), explains, this particular addiction comes with unique challenges: “It’s like trying to quit smoking crack when the pipe is attached to your body.”

It’s traditional in this kind of movie for supporting characters to outshine the alleged dramatic center, and such is the case here with Robbins’ white-haired, blue-collar, cliché-spouting character, who comes on strong as Mr. Zen Meditation Recovery Guru, but also has unacknowledged anger issues and a conflict with his adult son (Patrick Fugit) he hasn’t even begun to deal with. Even Joely Richardson, in what’s almost a wallpaper role as Mike’s wife, Katie, is a more compelling character than the tortured, earnest Adam (Ruffalo), who after five years of zero sexy-time is ready to start dating and picks a cancer survivor and fitness freak played by Gwyneth Paltrow. I love watching Ruffalo in almost anything – he always makes interesting choices and (as they say) he’s always present – and I’m not a Gwyneth-hater at all. But slapping the two of them together and asking us to care about cancer and recovery and eating disorders and their incipient but troubled romance all in one go is like a quadruple dose of sugar-frosted sincerity. I couldn’t wait for Adam to go off the rails and start texting Estonian prostitutes (and I cannot print the term he uses to describe them in a late-night phone call to Mike).

Then there’s the third-wheel character who’s not so secretly the real hero of the movie, the nebbishy, overweight E.R. doctor named Neil (Josh Gad, aka "the other Jonah Hill"), who starts out attending the sex-addict meetings only to fulfill a court order, and then gets fired from his job for shooting upskirt videos of his attractive boss. Neil lies about his sobriety, refuses to destroy his immense porn collection, gropes women on the subway, hits bottom with a resounding crash and then finds salvation in an unlikely friendship with Pink. No, I’m entirely serious – the singer Pink, also known as Alecia Moore, here plays Dede, one of the group’s only female members, and the connection between Dede and Neil, which at first stretches credibility to the breaking point, may be the best thing about “Thanks for Sharing.”

Dede’s not initially attracted to Neil, which is why she picks him as a confidant, and then she realizes that he possesses the raw material for a totally awesome guy, but by that point they’re both making strides, against all odds, with their sobriety. It’s a strong-coffee jolt of wonderful, lived and irresistible real-people drama, in the middle of a movie that’s immensely muddled overall but that I couldn’t stop watching. I bet I wasn’t supposed to find it hot, for instance, when Adam ditches the rabbit-diet fitness chick and hooks up with a clearly disturbed ex-girlfriend (Emily Meade) who wants to play out an alarming fantasy. But it’s those fragments of darkness and danger, around the edges, that give this brave, well-meaning and self-indulgent dramedy its gravitational pull.