Alabama moves to integrate its Greek system, in a surprisingly overdue move. Where was the administration before? 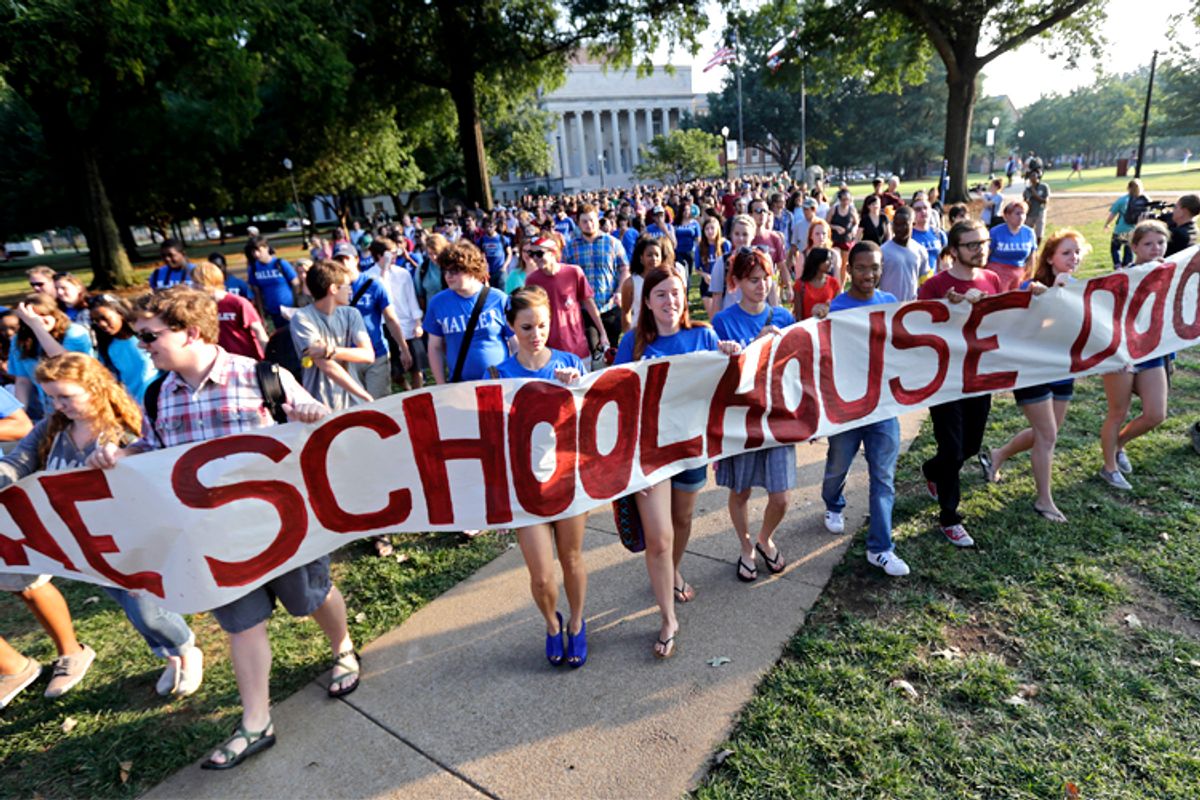 Students and faculty members of the Univ. of Alabama march across the campus to oppose racial segregation among its Greek-letter social organizations (AP/Dave Martin)
--

Today in news you might have expected to read 50 years ago: The University of Alabama is updating its sorority system to pave the way for African-American women to join its traditionally all white sisterhoods.

The surprisingly long overdue move comes one week after the school's newspaper, the Crimson White, told the explosive tale of a promising black student who "didn’t receive a bid from any of the 16 Panhellenic sororities during formal recruitment." In the feature, writers Abbey Crain and Matt Ford quoted a sorority member who said her chapter, Alpha Gamma Delta, had declined to even take a vote on the girl. And a Tri Delta member said that other houses "wanted to pledge the recruit and were also hindered by alumnae members." And a Pi Beta Phi student attested that "alumnae threatened to cut financial support if the recruit were to pledge." At the time, sorority higher-ups denied charges of bias, vaguely alluding to the secretive decision-making process that goes into recruitment.

But in a video message released Tuesday, University president Dr. Judy Bonner admitted that "Our Greek system remains segregated and chapter members admit that during the recruitment process that ended a few weeks ago, decisions were made based on race." In her message, Bonner evoked the school's racially charged history, recalling how back in 1963, "Vivian Malone and James Hood were met by Governor George Wallace as they attempted to enroll in classes at the University of Alabama," an incident that ended with the "peaceful integration" of the school. Now, she says, "The University of Alabama is taking the unprecedented step of opening up the continuous open bidding process to every student, to every sorority on our campus."

It's certainly a welcome step, though it does raise several questions of how the old practice was able to endure as long as it did. How glaringly blind an eye did school administration have to turn to permit such blatant division? Yet Alabama isn't the only academic environment in which segregation has stubbornly persisted. In a blog post last year, Emily Domrose wrote about "the divisions between the Black Greek system and the White Greek system" and the "unspoken" pressures on students to not cross racial lines. And it's not just colleges. This past spring, Georgia's Wilcox County High School made national headlines when it held its very first racially integrated prom.

The only recently rectified failure of integration at the University of Alabama was clearly made possible by the active, attentive dedication of certain members of the community determined to maintain the status quo. But it was also a result of simple unquestioning, long-standing complacency. The world doesn't get better all by itself simply by virtue of the passage of time. We have to make it get better, and never, ever stop making it better. At the time of the Wilcox prom, a parent summed it up for the New York Times. "The adults should have done this many, many moons ago," she said, "but it had to be the kids."