Why I still love New York

The city is crazy, but I can't imagine raising my family anywhere else 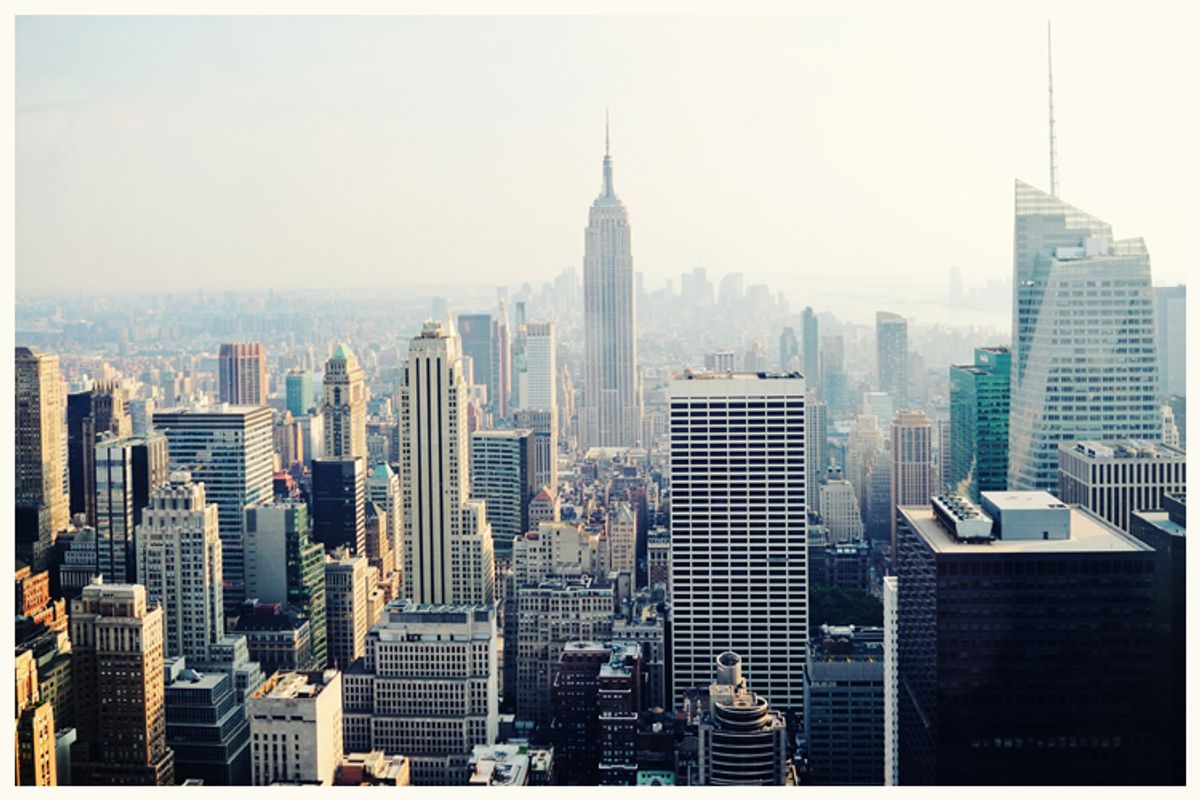 Maybe you don’t think anybody needs to sell anybody on New York City. Walk around it sometime; it doesn't exactly lack for people. But maybe you think those people are all tourists, millionaires and the homeless. Maybe you find it impossible to believe that regular working people actually live here. Maybe you don't understand why they'd even want to. So let me try to explain.

On Wednesday, Cari Luna wrote in Salon of her own abandonment of the city, a choice she once found "unthinkable," and how she was leaving it now to the "broke 24-year-olds who still find validation in the struggle; and… obscenely wealthy bankers for whom the city’s been remade." On Thursday, new data  revealed a rising poverty rate and obscenely growing income gap – "an eightyfold difference between bottom and top." Earlier this year,  a New York Times story deflatingly explained, "If you are defining middle-class by lifestyle, to accommodate the cost of living in Manhattan, that salary would have to fall between $80,000 and $235,000. This means someone making $70,000 a year in other parts of the country would need to make $166,000 in Manhattan to enjoy the same purchasing power." And it profiled a "middle class" professor who makes $125,000 a year. From much of the evidence, you'd be convinced the city is divided into those who can effortlessly afford to stay and those are too poor to leave.

And yet, here we are. Lots of us. Millions, in fact. If the map of New York City in your mind encompasses Manhattan below 92ndStreet, Park Slope and Williamsburg, then yes, you will have a hard time believing that it's possible. But the median New York City household income is a thoroughly average $50,895 -- which is remarkably close to the median in my own neighborhood ($51,747). Step across Broadway, and it's half that. Is it always easy living in a place of such conspicuous wealth, a place for which the phrase "The rent is too damn high" was coined, where living in 100 square feet in Harlem for $1,275 a month is considerably less fun than "Girls" would lead you to believe and where waiting in line for hours for insultingly mediocre, overpriced fries is an accepted practice? No. Life here if you are not rich demands endless strategizing – how to get the kids into the better public schools, where to go where milk is cheapest. And do I, on the days when the train is delayed because of some naked dude on the subway tracks, or there's a headline involving an extortion plot by an anti-Semitic Elmo, question the wisdom of my friends who've left for less freakish parts? No and no. Do I grieve when hospitals are threatened with closure or when a Chinese restaurant shuts its doors because it's been priced out of the neighborhood? Of course.

Why, then, am I still here? Part of my devotion to the city, I know, is familiarity. I grew up in Jersey City, looking at the tops of the twin towers out of my bedroom window. This is the place that feels like home. I don't stay out of habit or fear of the unknown, however. Do I ever think of leaving? Oh my God, are you kidding? Like, every week. I have left. Multiple times. When I went back out to San Francisco this summer, I wandered around in a dreamy haze of self-reprimand for ever moving out. I routinely float the "Maybe the answer is Philadelphia" bubble. Then I think, ugh, I'd have to buy a car.

I stay because of the many amazing things New York City will give you, if you let it. It can bleed you dry but it can offer you magic, for next to nothing. This past summer, a remarkably affectionate Reddit thread grew out of the question, "Is living in NYC all its cracked up to be?" As one of the best replies summed up, "There's always frugal ways to do what you enjoy -- unless it's barhopping and being a douchenozzle." My family and I live in a small co-op in a working-class, predominantly Dominican neighborhood. We do not have a Starbucks, but there's a place on the corner for coffee. Two weeks ago, we had a picnic of peanut butter sandwiches in Central Park and went to the Edward Hopper show at the Whitney on a family pass our school issued. The only expense was the subway ride. Tonight I'm going to an author reading at a bookstore. My family and I know the Jewish Museum is free on Saturdays and Bryant Park has free movies on summer Mondays and we know the High Line and the Roosevelt Island tram and the Shakespeare in the Park virtual ticket line and we know just having friends over for drinks. And frankly, if you think home is within walking distance of a LuluLemon or entertainment is a $200 Broadway ticket or breakfast is a Dominique Ansel confection, you're just not trying hard enough. (Although an occasional City Bakery pretzel croissant is definitely one of the perks of living here.)

When I was diagnosed with cancer, my doctor simply referred me to one of the top cancer centers in the world, where I'd eventually become connected with the researchers who are revolutionizing treatment. I'm in a protocol with patients who fly in regularly for what I take a subway ride to get. Oh, and when I got sick, I joined an incredible support organization and my friends and neighbors rallied with food and baby sitting and distracting amusements on a truly heroic level. Living here saved my life, without question. So there's that.

You see, mostly, it's about the people. In her story, Cari Luna talks about how her building was taken over by wealthier newcomers "who paid a premium for their cramped tenement spaces, didn’t learn our names, didn’t sit on the stoop, would let the door fall closed in your face." I know those guys too. But I've never lived anywhere in the world where I have seen more generosity or altruism or community spirit. For every douchey Williamsburg trust fund kid, there are so many more volunteers who are out there still, a year later, rebuilding Staten Island and the Rockaways and other neighborhoods devastated by Sandy. My older daughter goes to a school that has an LGBT club that starts in sixth grade. My younger daughter has a schoolmate who's transgender. They both have friends who have started the school year fresh from other countries, who have been starring in class plays by May. They go to a nice friendly Catholic church, and then out into a community full of people who are Jewish and Muslim and Buddhist and atheist and pagan. They are surrounded by people who are interesting and diverse. More than that, they are participants in a community that is caring and kind. As Jane Jacobs once magnificently explained, "People gathered in concentrations of city size and density … represent a great and exuberant richness of differences and possibilities. They should be enjoyed as an asset and their presence celebrated." That's what I see whenever I'm flying in from somewhere else and I spy that skyline that always still makes me melt. I see those faces.

E.B. White said that no one should come to New York unless he's willing to be lucky, and I've been ridiculously lucky, it's true. I begrudge nobody the leaving of it – this is an insane, dysfunctional, expensive place. But it'd be nice if those who leave – or those who've never stayed – understand that New York is Hollis, Queens and St. George, Staten Island and Kingsbridge, the Bronx. It's cops and teachers and old retired ladies and Dr. Zizmor. It's full of the extravagantly wealthy and unfathomably poor, but it's mostly the pretty regular. It's weird and difficult and it's breathtaking and it's ordinary too. And you're welcome to go ahead and flee Park Slope, but know that Park Slope is not all there is to New York. Know that between its exasperating extremes, its wild, beautiful heart is still there. Sometimes, you just need to look for it in a different ZIP code.