Quit hiding behind the First Amendment 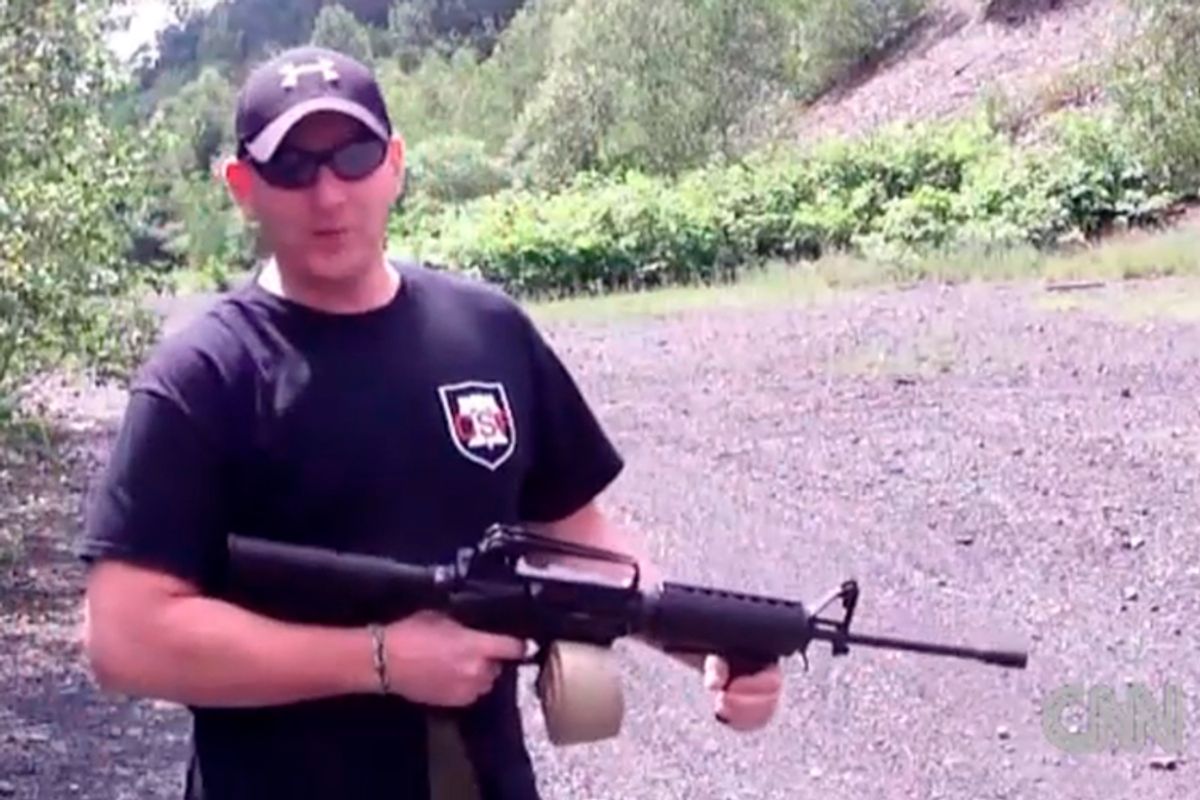 Gilberton Police Chief Mark Kessler, the "only full time member" of his small Pennsylvania town's police force, is about to join the ranks of the unemployed. Why? Well, as he and his supporters put it, it's "because elites in Washington D.C. demanded his JOB for videos depicting the Chief exercising his First & second amendment right." (sic) Ah yes, of course, that all too common problem that cruelly targets the mouthy and stupid – looks like somebody must be having his constitutional rights violated!

The colorful Kessler has gained Internet fame of late thanks to his strongly worded videos regarding "libtards." Most of those words start with the letter F. Let it not be said Kessler is unclear on his opinions -- in one of the videos, he sports a t-shirt that spells out the portion of the anatomy in which liberals prefer to "take it." He also has a Twitter stream, in which he helpfully separates the "terd munchers" from the "dick bags" and jokes about shooting "a libtard out of a tree :)." The smiley is a nice touch, don't you think? Oddly enough, this kind of behavior did not endear him to his bosses. But when he was suspended in July, it was not for his word choices but for what the town claimed was "misuse of borough property." Yet as a member of Kessler's "Constitution Security Force" told the press Friday, "Mark has gotten railroaded. He was exercising his First Amendment rights by backing it up with his Second Amendment rights."

Oh gosh, when have we heard this excuse before? I know, every single day on the Internet. Every time someone gets a comment deleted or has an ad campaign rejected or is criticized for making a rape joke, it's all "Help! Help! I'm being repressed!" But not so fast, downtrodden trolls of the world. Here's the First Amendment, in its entirety: "Congress shall make no law respecting an establishment of religion, or prohibiting the free exercise thereof; or abridging the freedom of speech, or of the press; or the right of the people peaceably to assemble, and to petition the Government for a redress of grievances." That's it.

Those words have been interpreted and refined and challenged many times over the country's history. Just earlier this week, a federal appeals court ruled that your Facebook likes are protected under the First Amendment. The First Amendment means that, within certain defined limits, you can say what you want and the government won't interfere with your right to say it. It will not, however, grant you a hall pass to say things that are threatening or defamatory or false. Nor will it oblige a retailer to carry a magazine or a network to air an episode. And what it most assuredly will not do is wave a magical wand over your words and grant you freedom from any consequences that might arise from saying them.

Having the right to speak does not mean your words will go unchallenged. It doesn't mean you won't be held to certain standards of conduct in the private sector. It doesn't mean your rights are being violated if, as a result of your speech, somebody else doesn't want to buy your album or shop in your store. It doesn't grant immunity from the repercussions that come from actions. As the old saying goes, even if I do not agree what you say, I will defend to the death your right to say it. But I'll also expect you to take responsibility for it, and not hide behind the words "free speech" if you don't even know what they truly mean.