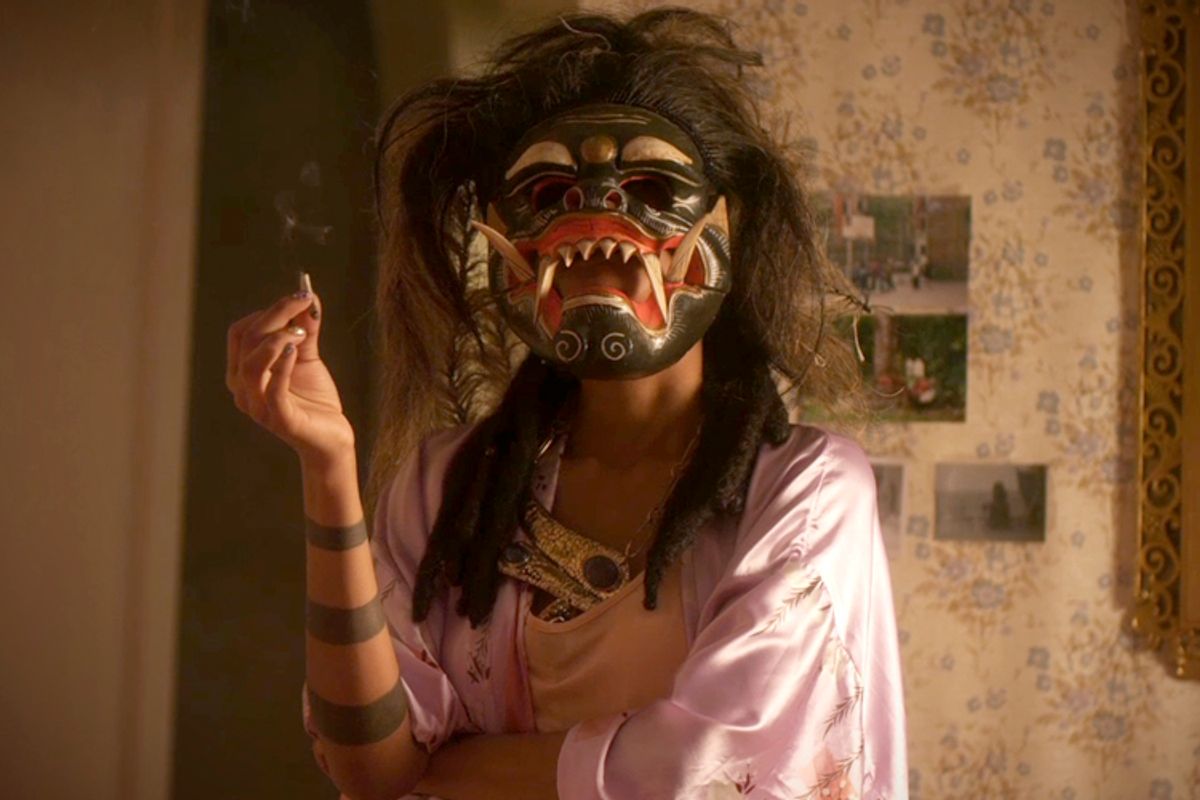 In the wake of Ryan Coogler’s “Fruitvale Station” and “Lee Daniels’ The Butler” and Alexandre Moors’ “Blue Caprice” and Andrew Dosumnu’s “Mother of George,” the hype about 2013 as the year of Black Cinema – and independent-minded, free-spirited and wide-ranging black cinema, at that – isn’t hype anymore. And that brings us to writer-director Shaka King’s Brooklyn-made labor of love “Newlyweeds,” which is – wait, what was I saying? And where am I? Oh, that’s right: weed. I’m not saying that lots of people who went to see this indie comedy breakthrough over the weekend in New York and L.A., where it’s already playing, showed up stoned. And I’m not saying they didn’t. I’m saying that King has fearlessly forged into unexplored territory -- that being the African-American stoner comedy, with an adult audience in view – and the results are profoundly hilarious, occasionally heartbreaking, often brilliant and entirely devoid of political piety.

“Newlyweeds” has a tremendous cast overall, including small parts for the ace character actors Isiah Whitlock Jr. (as a jailhouse predator in a purple suit, lamenting the “cracker” propensity for smoking weed mixed with tobacco), Anthony Chisholm (as a steel-spined middle-class dad) and Hassan Johnson (as a straight-shooting, good-hearted drug dealer named Two for Three). Colman Domingo, who had small parts in both “Lincoln” and “The Butler,” nearly steals the whole movie in a supporting role as a pretentious, fashion-plate museum curator with a jet-set demeanor and a stash of Mongolian hashish. (His character puts me in mind of that Chris Rock line about the African-American arts community of Brooklyn: “I never knew black people could be snotty.”) But it’s hard to overpraise the central couple in “Newlyweeds,” especially the wonderful Amari Cheatom as Lyle, the laconic repo man, committed pothead and utopian dreamer at the heart of King’s tale. Cheatom was seen briefly early in "Django Unchained," but this is his first major big-screen performance and it won't be the last.

Lyle sometimes imagines himself (when excessively burnt) as half of a badass, mid-‘70s crime-fighting salt-and-pepper duo, but he might have more in common with Stan Laurel than with John Shaft. He spends his days driving around Brooklyn with tattooed hothead Jackie (Tone Tank, also very funny) repossessing poor people’s rent-to-own furniture – truth be told, sometimes the wrong people’s furniture, because he’s so baked. Nights he spends smoking more of Two for Three’s powerful ganja with the beautiful Nina (Trae Harris), a bit more of a middle-class striver type who has traveled around the world and leads educational workshops for groups of healthy-looking multicultural children. Or at least she does until that unfortunate episode at the Brooklyn Children’s Museum involving an entire tray of brownies.

Lyle and Nina both wind up spending nights in jail, in separate incidents, and one could say that while King never explicitly makes the point that pot laws are enforced selectively on racial grounds, that subtext is always present. Lyle also gets punched in the nose by an irate rent-to-own customer, befuddled and terrorized by an old lady, disrespected by a teenage drug dealer (who assumes he’s a cop), sexually harassed in jail and out-wrestled by Nina’s dad. Then there’s the episode, after Jackie lures Lyle back into drinking, when he wakes up under a bench on a moving subway train, with his keys inside a plastic bag attached to his ankle and his arms pinioned inside a pink, child-size parka. I hate it when that happens. Cheatom plays all of this with a stone-faced, almost tragic resignation reminiscent of Buster Keaton. It gets funnier and funnier, and then rather suddenly it isn’t funny anymore. I literally laughed until I cried, and then I was crying.

Let’s be clear about the fact that King is not making some kind of anti-pot manifesto. Lyle and Nina are deep and habitual users of marijuana, to a degree that empties out their loving relationship, drains their financial resources and dries up their interest in other activities. But it’s not like they kill anybody or stick up liquor stores, and they probably don’t do any harm to themselves that can't be undone with enough time. It’s clear in the film that Lyle really starts sliding downhill once he’s back on the bottle. This is a sophisticated comedy made for grown-ups, but King doesn’t have a policy prescription when it comes to weed any more than the Harold and Kumar movies do: Smoking pot is really fun, and people who do it too much can do some stupid things. But within that banal observation lies an entire world of observation, a smoky, jazzy, biting and heartfelt comedy about two young people, one love affair, American life, African-American life, Brooklyn and – oh, yeah – weed.

“Newlyweeds” is now playing at Film Forum in New York and the Baldwin Hills Crenshaw Plaza 15 and Rave Cinemas 18 in Los Angeles. It opens this week at the Regal Majestic Stadium 20 in Silver Spring, Md., with more cities and dates to be announced and home video to follow.