The shocking college athlete rip-off: Now they're fighting back

From brain trauma risk to poor compensation, student athletes are getting swindled. Here's why you should care 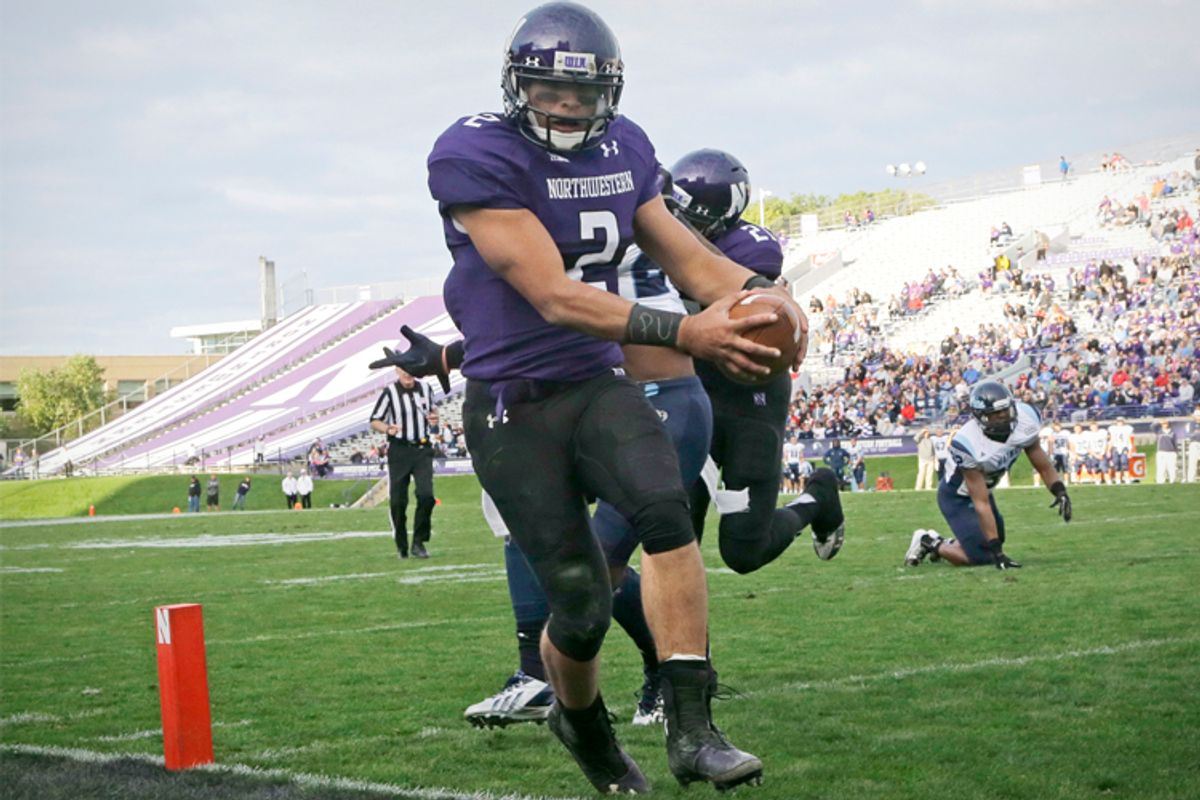 Northwestern quarterback Kain Colter wears the letters "APU" on his wristband during a game against Maine in Evanston, Ill., Sept. 21, 2013. (AP/Nam Y. Huh)
--

The leader of the group that just pulled off an unprecedented collective protest by NCAA athletes told Salon such actions will escalate this season.

During nationally televised college football games on Saturday, 28 total players wore the slogan “APU” -- short for “All Players United” – on their wrist tape or elsewhere on their bodies. Players from the University of Georgia, Georgia Tech and Northwestern took part.

“I think it’s the first time the players have shown a sign of unity in terms of NCAA reform on TV … during games,” said former linebacker Ramogi Huma, the founder of the National College Players Association. Huma told Salon that reaction to the protest has “all been positive,” spurring more players to join. He said players intend to keep wearing the APU slogan on the field “until NCAA sports reform is achieved in a way that satisfies the players,” and that the action “will get bigger and bigger” before the regular football season concludes.

Huma said the protesting players’ “number one issue is trying to minimize the risk of brain trauma in contact sports.”

“It’s a very big issue,” Huma told Salon, “and the NCAA has done virtually nothing.” Huma cited internal NCAA emails from 2010, filed in court as part of a lawsuit and reported by the Washington Times, in which NCAA director of health and safety David Klossner was asked whether federal concussion recommendations for juvenile sports “would go beyond what is required at the college level.” (Klossner responded, “Well since we don’t currently require anything all steps are higher than ours.”)

Noting the “big dust-up” over Ohio State players who allegedly violated NCAA rules by accepting tattoos for autographs, Huma charged that conversely, “had those very players been put back in the game with concussions, there would have been no consequences.”

Huma told Salon the APU effort was also aimed at pressuring the NCAA to boost graduation rates through creating a trust fund to “incentivize and support” players, and at “making sure that players are never stuck with medical expenses or lose their scholarships when they’re injured.”

Huma noted that current NCAA rules allow universities to cancel scholarships and medical coverage for athletes injured on the field, and prohibit universities from replacing athletic scholarships with non-athletic scholarships when a player is dropped from the team. The NCAA, charged Huma, would rather schools “save a buck and excuse themselves from their stated obligation of educating that player.” With “over a billion dollars in new revenue” coming in, said Huma, “there should be more support for the players,” rather than all the cash “going to the places where it usually goes”: luxury boxes and six-figure salaries. NCPA has also called for college athletes to be allowed to sign endorsement deals, and for stipends they receive to be hiked to better reflect the true cost of attending college.

Asked about the protesting players and their platform, NCAA spokesperson Stacey Osburn emailed a statement saying simply, “As a higher education association, the NCAA supports open and civil debate regarding all aspects of college athletics. Student-athletes across all 23 sports provide an important voice in discussion as NCAA members offer academic and athletic opportunities to help the more than 450,000 student-athletes achieve their full potential.”

The NCAA has long maintained that its rules and regulations, and the “Principle of Amateurism” supporting them, are in the best interests of the “student-athletes” on the field. But many so-called student-athletes disagree.

Then-UCLA punter Jeff Locke, who signed up most of his team on an NCPA petition, last year told Salon, “I don’t see how you can really describe it as anything but a job being an athlete. You work the equivalent hours … you get paid in the form of a scholarship.”

That view was shared by the authors of a 2012 Buffalo Law Review article arguing that state school athletes have a compelling case for unionization rights under several states’ public employee laws. “We see a level of control that exceeds that in almost any other workplace,” co-author Thomas Frampton told Salon, “whether it’s the long hours that athletes are expected to work, or broader issues like what happens off the field in their personal time, what they put in their body, what they don’t put in their body.” (While NCPA is backed by the United Steelworkers union, it so far hasn’t pursued unionization.)

As I’ve reported, a group of NCAA athletes attempted to pull off something much more dramatic than the “APU” action during March Madness in 1995: players planned to walk onto the court in uniform but refuse to play. Then-University of Massachusetts forward Rigo Núñez told Salon that players had hoped to “paralyze the whole NCAA,” but by the time the moment arrived, “The fear of being blackballed overcame the ‘rah rah’ emotion’ … No one went on to actually pull the trigger.”

Two years later, after teammate Donnie Edwards was disciplined for accepting a bag of groceries left at his doorstep, Huma formed what would become the NCPA while still a linebacker at UCLA. The group’s efforts have included petitions to the NCAA from players and reports on its business model co-authored with Drexel University’s Sports Management Department. Following pressure from the NCPA, the NCAA Division I board of directors voted in 2011 to allow universities to offer athletes $2,000 stipends and the comparative security of multi-year scholarships. The longer scholarships narrowly survived an attempted veto vote by NCAA schools, and Huma said most schools have stuck to only signing students for one year at a time, leaving their futures on the field and in the classroom that much more insecure.

Despite the leverage that the NCAA and universities wield over college athletes, Huma told Salon that participants “didn’t really express fear” about Saturday’s protest. “It’s probably because they designed it in a way that they felt comfortable with,” said Huma. “Guys, they write things on their wrist tape and towels all of the time.” He said the athletes “were more excited than they were anything else.”

According to Huma, the planning began a few months ago, after current athletes joined a class action antitrust lawsuit initiated by former player Ed O’Bannon. As Taylor Branch reported in the Atlantic, O’Bannon alleged the NCAA was profiting off of his portrayal in videos while denying him a share of the revenue (the NCAA denies this). Huma said that players who joined the suit faced “some really harsh stuff” on social media, inspiring fellow athletes to seek some way to show solidarity. From there, the “APU” effort broadened to include the concussion issue and other causes.

Huma said he’d heard no reports so far of negative repercussions or intimidation against players who participated, which he said was a testament to the broad popular support for their message. “The NCAA, it appears, is not going to try and squash it,” said Huma.

After decades of scattered discontent, why is the first-of-its-kind on-camera protest happening now? “I think the environment is a lot different than it was in the ‘90s,” Huma told Salon. He cited increasing criticism of the NCAA from figures in media, sports and politics, as well as the NCAA’s historic high revenues: “The money has skyrocketed, and that visibly increases the disparity [between] what the players are generating and the gaps in protection they face.”

“The NCAA really has dropped the ball,” said Huma, fueling the athletes’ public protest. With under three months left in the football season, he told Salon, “we’ll know relatively quickly what the pace of this might be.”