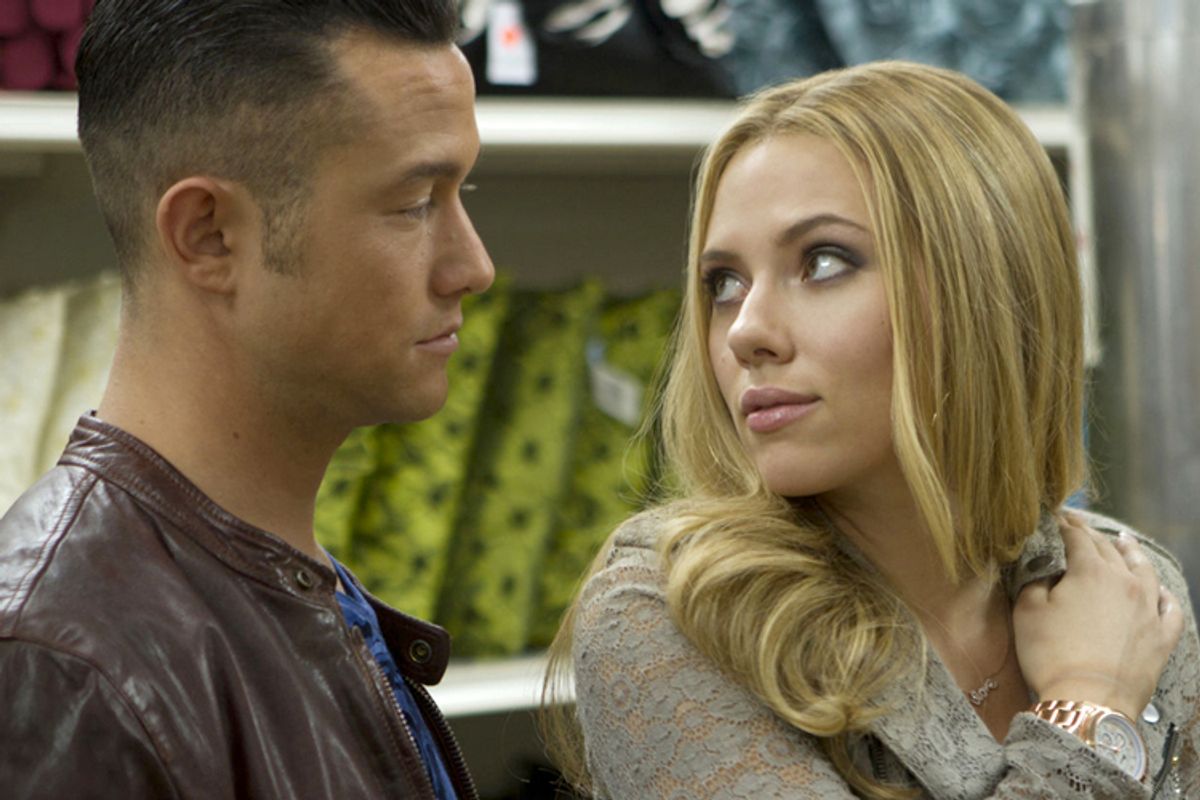 As you might suspect from its title, Joseph Gordon-Levitt’s winsome writing and directing debut “Don Jon” is a comic fable about an inveterate Lothario defeated by love, and much of its charm lies in watching the likable Gordon-Levitt play against type as a muscle-bound Jersey boy absolutely free of any introspection or self-reflection. If the eponymous Jon comes pretty close to being an ethnic stereotype – he’s a good-hearted cousin to Tony Soprano, devoted to his Camaro, his church, his spick-and-span bachelor pad and his mother – Gordon-Levitt’s such a commanding physical actor, such a master of tone and nuance, that he’s always fun to watch. Even the way Jon stomps down the corridors at his gym, or says his Hail Marys and Our Fathers while doing chin-ups, conveys the sense of a man dominated by routines he doesn’t understand.

I don’t know how many guys in Jon’s demographic are likely to see this movie – close to none, probably – and I can’t possibly know whether they’d find it hilarious or condescending (or some of both). “Don Jon” is medium-weight satire rather than social commentary, but the thread of faint but persistent unhappiness that runs through Jon’s placid existence is highly convincing. He’s acclaimed as the best-looking guy in his inner-suburban town (the exteriors were mainly shot in Hackensack, for you Garden Staters). He goes home with a different long-legged, lustrous-haired nightclub beauty every weekend; never less than an 8, he insists. (When one previous conquest confronts him on the dance floor, he says incredulously: “You’re a big girl. You really thought I was going to call you?”)

I felt a lot more in tune with the guy, actually, during the Swiffer scene. This is jumping ahead a little bit, when Jon discovers that Barbara Sugarman (Scarlett Johansson), the drop-dead, bombshell, perfect-10 and maybe-Jewish new girlfriend who has tamed and disciplined him, might not be everything she’s cracked up to be. They’re in Home Depot or someplace similar, buying some shelving that Jon’s gonna drill into her walls (of course), when he says he’s got to hit the cleaning-products aisle for some Swiffer refills. Barbara doesn’t know what that is. She has clearly never swept a floor; her mom’s Latina maid does the housecleaning, and she’s horrified that Jon does it himself. Backing her remarkable butt into him and making a you-are-forgiven-for-now kissy-face, Barbara makes clear that when they move in together his Swiffering days are done.

Maybe it’s a broad comedy role in an insignificant film, but I can hardly even explain to you how enjoyable Johansson is here; anyone who believes she underplays or cannot act has yet to meet Barbara Sugarman. Fully accessorized, highlighted, entitled and faux-humble, Barbara is a nightmarish vision of prepackaged gorgeousness against which Jon has no chance. I swear, when they kiss you can smell the gum. (That sour-apple kind, with sparkles.) As usual in Jon’s life, he doesn’t quite realize what’s happening, but Barbara soon pushes him into what one of his pals dubs the “long game”: bringing her home to meet his parents (Tony Danza and Glenne Headly, both doing shtick but very funny), taking her to rom-coms (we see snippets of one involving Anne Hathaway and Channing Tatum), declaring an absolute moratorium on all that porn.

I’m not sure that Gordon-Levitt completely pulls off the sudden shift in tone that follows when Jon unexpectedly pivots from Barbara to Esther, and just as suddenly stops putting gel in his hair and starts asking questions about family, religion and so forth. But I found myself utterly charmed by the generosity of vision and the dramatic ambition at work here; it’s as if a mid-‘90s Italian-American sex farce (definitely co-starring Joe Pesci) had suddenly turned into a Henry Miller novel. This is a sweet, lively and funny movie rather than a fully realized one, but it makes clear that Gordon-Levitt has a natural feeling for cinema and should do more of it. As for Jon, I’m completely fine with the idea that a love affair with a grieving, pot-smoking cougar, however short or long it may last, provides him with a Huck Finn raft-ride into a new life. Internet porn helped launch him on that journey, and so did Swiffer.