I worked all week for free?!: The horrifying, true story of $0 paychecks 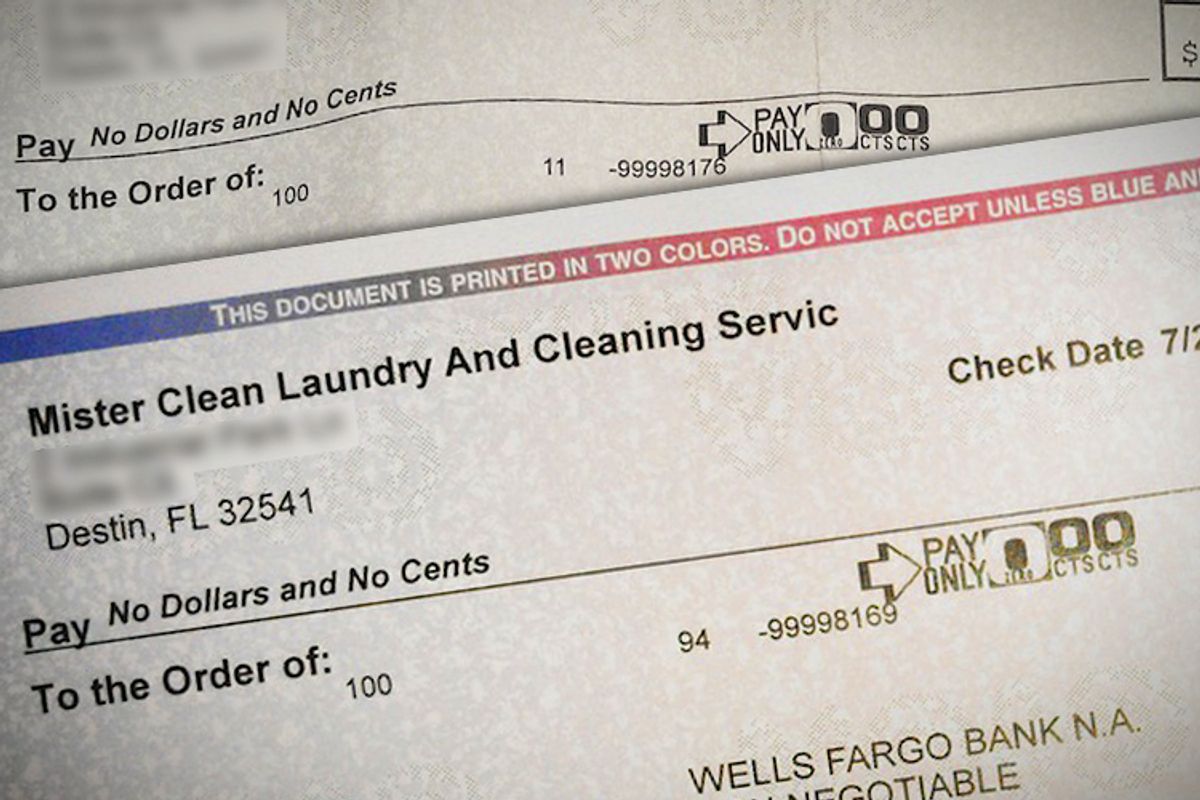 In the annals of degrading, infuriating labor practices, this one may take a prize: Meet the cleaning workers who received ... zero-dollar paychecks.

Now, defying alleged deportation threats and protesting those empty paychecks, a handful of striking guest workers from Jamaica are demanding accountability from the boss who hired them, the companies whose buildings they were cleaning, and the Florida politicians like Marco Rubio who took those companies’ cash.

“The promises made by our employer, Mister Clean, they were so enticing that we borrowed money to get here, over $2,000,” striker Dwight Allen told Salon in a recent interview.  But “when we got here … we realized that all of the promises were all false.

“We had to sleep on the floor in overcrowded apartments,” said Allen, while paying their boss rent that sometimes exceeded the low wages and limited hours he provided them. “After getting a paycheck of zero dollars and zero cents” due to rent being deducted, said Allen, “we would still be getting texts from his wife saying that we still have balance of x amount” in remaining rent unpaid. When workers began organizing, he said, “we were threatened in writing from our boss.”

Allen and other guest workers employed by Mister Clean Laundry and Cleaning Services filed a federal complaint and went on strike Aug. 19. “We were scared,” said striker Shellion Parris, but “we knew in the back of our heads that we need to do this, we have to do this.”

Photos provided to Salon by the National Guestworker Alliance, the group behind the work stoppage, show checks reading “No Dollars and No Cents,” and a page dated June 25 warning guest workers on H-2B visas that, “Any worker who does not show up for your assignment will be immediately removed from Mister Clean Housing and will be reported as AWOL (Absent Without Leave) to ICE (Immigration Custom Enforcement).” The statement, which was in all-caps, continued, “You will then be escorted to pick up your plane ticket and go back to Jamaica. You will have an ICE and Okaloosa County Sheriff Department Escort.” Workers say that warning arrived stapled to their checks. Mister Clean did not respond to a request for comment.

Those are some incendiary allegations. But NGA legal director Jennifer Rosenbaum says they reflect a “pretty standard set of problems that guest workers face.” “If you come forward to confront your boss about illegal workplace conditions,” said Rosenbaum, “there’s going to be egregious threats of immigration enforcement against you.”

Rosenbaum, an adjunct at Tulane Law School, argued that the risk of future such abuse could be mitigated by some worker protections included in the immigration bill passed by the Senate, including allowing guest workers “who are facing serious labor abuse to separate their visa from their abusive employer.” (As I’ve reported, the Senate bill is a mixed bag for guest worker advocates, expanding programs that have seen abuses while also creating a more labor-friendly alternative.) Since starting their strike, the Jamaican guest workers have framed the alleged abuses they experienced as an object lesson in the need for reform; they’ve pressed their case to politicians including GOP congressman Steve Southerland, a potential swing vote on reform who represents a district where the strikers had worked.

The strikers have also been calling on members of Congress to return donations from condo companies whose buildings they were cleaning under contracts with Mister Clean. According to NGA and the nonprofit Public Campaign, those four companies together donated 25 times as much to Republicans as to Democrats, a disparity NGA ties to Republican resistance to reforms. The offices of Rep. Southerland and Sena. Rubio did not respond to Wednesday inquiries.

As I’ve reported, employers’ credible threats to get guest workers deported and “blacklisted” from working in the United States offer additional opportunities to drive their working standards below legal limits. Faced with this challenge, NGA has pulled off audacious strikes by Hershey’s, McDonald’s and (Wal-Mart-supplying) seafood workers, aimed at squeezing politicians and corporate decision-makers – not just their legal employers, but actors across the supply chains they’re part of. In an August statement, NGA director Saket Soni charged that while it was Mister Clean that legally employed the Jamaican guest workers, the four Florida condo companies whose buildings they cleaned all “profit from the abuse of immigrant workers.”

But Paul Wohlford, vice president of the Resort Collection of Panama City Beach, told Salon, “we as a company renounce their allegations” that “we were involved in” alleged abuses of workers cleaning their buildings. “We had zero knowledge of how these workers were treated,” said Wohlford, adding that having contracted with Mister Clean to clean Resort Collection condos, “I’m a victim in this too, because I’ve paid money that may or may not have been paid appropriately.” Wohlford said that his company’s relationship to Mister Clean was “like if I go buy a hamburger from McDonald’s,” in that it’s not a fast food customer’s responsibility to monitor the store’s working conditions. “If they’re working for our company, they’re going to be treated fairly and equally,” said Wohlford. “But these people didn’t work for me.”

The Resort Collection was the only one of the four companies whose buildings the strikers had cleaned that provided comment on their allegations; Silver Shells declined, Five Star Beach Properties did not respond to a Wednesday inquiry, and Oaseas Resorts has reportedly gone out of business.

From a young age, said Dwight Allen, “people daydream, wonder what I’d be doing in America right now.” But “getting here and coming [to] this kind treatment, and learning that it’s a global thing – it’s like a bombshell is dropped on you … Asking yourself, am I really in America?”

While the fate of immigration reform remains uncertain, workers and NGA say they’ve achieved a potentially precedent-setting step forward on disarming deportation-happy employers: a letter from a Miami ICE official addressing “the possibility of ICE enforcement actions against the guest workers” on strike against Mister Clean, and stating that “ICE does not undertake enforcement efforts” that are “designed to frustrate the enforcement of labor and employment laws.”

ICE has previously called off enforcement actions in apparent deference to a memorandum of understanding designed to prevent it from being used as a weapon in labor disputes. But Rosenbaum argued this letter represents the first time an ICE office has preemptively agreed, based on pressure from local activists, not to initiate any enforcement actions against a group of workers engaged in collective action. “What ICE nationally should be doing is making sure that each regional field office is in compliance” with commitments not to disrupt organizing, Rosenbaum told Salon, but “we have found that’s been very difficult, and that hasn’t been a responsibility that ICE at the national level has taken seriously. So we are trying to move real accountability at the regional level.” Meanwhile, seven undocumented immigrants were arrested last week in a White House civil disobedience action protesting record-high deportations under the Obama administration.

Shellion Parris challenged policymakers to “take off that jacket” and “experience what we are going through” as low-wage guest workers. “Your family call you and say, ‘Mommy, I don’t have any shoes to go to school.’ And you work for two weeks and you cannot send back home 50 American dollars to buy a pair of shoes for your daughter, your son,” said Parris. “Put them in that situation, and then the decision-making, it will be different.”