Nothing scarier than a nervous white man: The "Redskins" debate is really about white privilege

The debate about the Washington Redskins name is all wrong: It's really a symbol of white fear in a changing nation 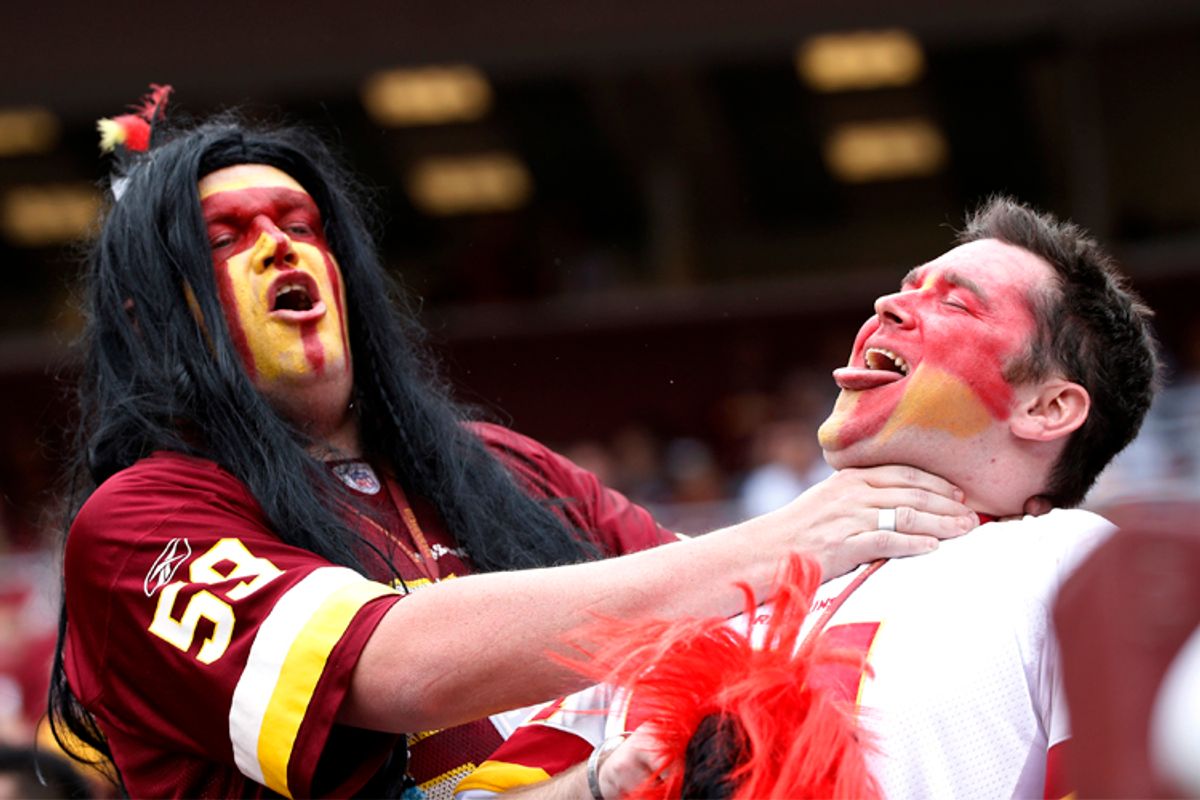 Redskin. The word relegates complex humanity to a lifeless specimen, a stagnant and specious simulation of a physiognomy invented during a time of conquest. It reduces cultural identity to the wholly unreliable tableau of melanin and nose structure. It is of a specific historical moment, but exists outside of time, like the immutable figure it purports to represent.

The mascot accompanying the word is a brand, a commodity, selling not merely image or design but also the thoroughgoing cant of colonial fantasy. It also sells identity. The identity it peddles has nothing to do with being Native.

The Redskins mascot is a powerful symbol and progenitor of majoritarian angst in today’s United States.

Much has been said about the deleterious effects of the Redskins mascot on Native communities; supporters of the mascot demand that its opponents quit being so uptight or politically correct (the stupidest and most insidious red herring in the American lexicon). I am uninterested in rehashing this debate. I instead would like to argue that the redskin has little to do with actual Indians and almost everything to do with the peculiar disquiet of a whiteness perceived to be in decline.

Whiteness has always been defined in contradistinction to the invented authenticity of the Indian, who is typecast as barbaric but romanticized as the shamanistic guide to North America’s indigenous spaces, those mystical geographies of the settler’s overactive imagination. (We see the same phenomenon in the Zionist appropriation of ostensibly Oriental culture, as when an Israel Day celebration on my campus featured traditional Arabic food and a live camel.) The historical Indian, then, was dispossessed and has been retrofitted to Hollywood specifications, repatriated only to the extent that he can serve as a passive emblem of American identity.

Humane assimilationists of the past set out to save the man but kill the Indian. These days the goal is to save the fake Indian so we don’t kill the white man.

In the machinery of the highly profitable NFL, the redskin has another function: he scowls at those who would challenge the commodification of ethnic imagery in the pervasive and eternal quest of corporations to become captains of everybody’s destiny. People scream for the preservation of the logo, citing tradition and identity and honor and other existential factors, but in reality they’re merely expressing loyalty to a brand, the capital accomplishment of any business.

The history of the term “redskin” remains ambiguous. Anti-mascot activists claim that its origin lies in the practice of scalping: American soldiers were paid for each scalp, or redskin, they could produce as proof of a dead Indian. Linguist Ives Goddard, however, contends that various Native nations used the word to distinguish themselves from Euro-American settlers. James Fenimore Cooper brought the word into wider use in his 1823 novel, "The Pioneers."

The word’s origin is important, but no matter where historians and linguists manage to finally trace it, there’s no doubt that for the larger part of American history it has been viewed and used as an insult. Goddard points out that one can accept his theory of the term and still oppose the Redskins mascot without any contradiction.

The redskin stands apart from other controversial mascots because it is recognized as an epithet in addition to a caricature. The pervasive use of Indian imagery in American sport is crucial to properly understanding the redskin, though.

There are lots of human mascots in the United States: cowboys, Vikings, crusaders, pirates, Trojans, saints, Spartans, senators and the more animate Fighting Irish, Celtics and Flying Dutchmen. Beyond a scattering of Gaelic-themed nomenclature, though, the use of living ethnic groups — as opposed to the nicknames denoting vocation or ancient history — is generally considered to be poor form, if not entirely unthinkable (the Dallas Jews, for example, or the Kansas City Chicanos).

Contrast this with the abundance of Native likenesses. At the high school, college and professional levels, there have been thousands of Indian mascots, encompassing specific tribal names, expressions of a warrior ethos and, finally, as in the case of the Washington football franchise, terms of contempt. (Add to the list vehicles, food and clothing lines.)

Such abundance of Native likenesses is no accident. Nearly absent from debate about mascots is the fact that Indian nations were colonized by the United States, leading not only to relationships of disparate power, but also to the fascination with the natives common to all colonial projects and the desire of the colonizer to maintain control of the historical and contemporary narratives of their encounter.

Indian mascots aren’t fun-loving objects of admiration or a mere articulation of innocent fandom. Nor are they a legitimate attempt to “honor” Natives (a deed best accomplished, in any case, by listening to them rather than informing them what type of altruism they should accept — or, better yet, by supporting the implementation of treaty rights). Fans can absolutely root for Indian mascots without malice, but there is no escaping the fact that on a broader level those mascots are remnants of a colonial need to name, govern and define. It is pointless to reduce the issue to individual intent when the problem is institutional.

If we are fully to make sense of the Redskins controversy, then, we need to remove the conversation from conventional sites of multicultural politics and situate it in analysis of colonialism and its enduring legacies.

Whenever I teach Native literature, the subject of mascots arises. Most Americans encounter Native politics through the issue. It is unfortunate, because greater questions exist about sovereignty, self-determination, resource appropriation, repatriation and decolonization.

It is therefore doubly unfortunate that discussion of mascots is usually delinked from those greater questions. When my students invoke mascots, I try to offer a perspective wider than matters of representation and sports culture. Many are comfortable debating racism (especially those who believe it doesn’t exist), but most have no ability to question the legitimacy of the United States as a steward of indigenous territories.

Such questioning is of great import in understanding the vileness of the redskin. Without it, we are left with decontextualized lip-flapping from talking heads and radio jocks. They point out that tribes participate in the handling of mascots and that many people of color support their retention. These arguments are true. They are also largely meaningless.

Even in expressing support for various Indian mascots, tribal leaders emphasize the importance of decolonial struggle. The Confederated Tribes of Siletz Indians, for instance, responded to a ban on Indian mascots in Oregon by reaffirming their struggle against “the real issues of racism.” In other words, banning Indian mascots doesn’t adequately address the underlying logic that gives rise to the mascots in the first place.

Responding to the same ban, The Confederated Tribes of Grand Ronde announced, “The Tribe is very disappointed that they’ve trampled our sovereignty and have ignored something that our Tribes in Oregon have been calling for for years, which is curriculum that accurately describes Oregon’s Native history.”

Both nations appear to believe that bans on mascots are a pretext for ignoring Indian voices. (Of course, one should never presume that tribal leadership always reflects the will of the entire tribe.) Then again, other nations actively protest mascots, connecting them to historical injustices. The Oneida of New York has proclaimed, “The word ‘redskins’ is deeply hurtful to Native Americans. It is what our people were called as our lands were taken. It is the insult Native American parents heard as their children were taken.”

I’m amused by the sudden interest in Native feedback whenever the topic arises. While it would seem intuitive to seek the opinions of those directly affected by a particular issue, such is not often the case with people of color, who are constantly berated and patronized in the absence of their input. Indeed, the opinions of people of color seem to matter most when they support positions that absolve white folks of complicity in racism.

No matter who says what about Indian mascots, one need only observe their popularity and endurance to realize that they occupy a special position in the American imagination. Regrettably, it is a colonial imagination, emerging only in relation to the Indians it has invented and must control in order to survive.

It is fitting that the redskin resides in Washington, D.C., site of so many treacherous promises and genocidal policies. No place better exemplifies the symbolic value of mythologized Indians to the making of the United States.

In moments of magnanimity, we can read the Redskins controversy as an allegory of slovenly acquiescence to corporate power. In more somber times, we can discard the allegory. As with military worship, fashion choices and product loyalty, many sports fans tether their identities to a specific brand and thus to a type of commerce they only passively influence. These attachments can benefit consumers psychologically, but rarely economically, for they manipulate us into assuming illusory feelings of control.

Indian mascots are more serious than soft drink preferences, however. They are products of an American will to name what has been conquered and to maintain power through a refusal to reconsider traditions of naming. Replacing Indian mascots such as the redskin with more benign characters represents a threat much greater than a change of name or color. It indicates a shift of consciousness from one of colonial privilege to the imminence of tribal autonomy.

Indian mascots aren’t innocuous. Their endurance illuminates angst more clearly than any purported adulation of Natives. What will America become, after all, if the majority is forced to soften its vise grip on the images by which its identity is constituted? (That most people are unaware of these foundations of majoritarian identity only increases the fervor in support of retaining Indian mascots.)

To those who tenaciously support the redskin, I humbly offer this bit of unsolicited advice: If your sense of self is so tied into a mascot that to lose the mascot would be paramount to a personal insult or a historical betrayal, then might I suggest a deeper engagement with basketball? No wizards or knicks or trail blazers or 76ers will be upset by your devotion to a corporate logo.