How I botched it on CNBC

It was fun TV, but I didn't make an argument that could penetrate the profit-fixated bubble of the finance press 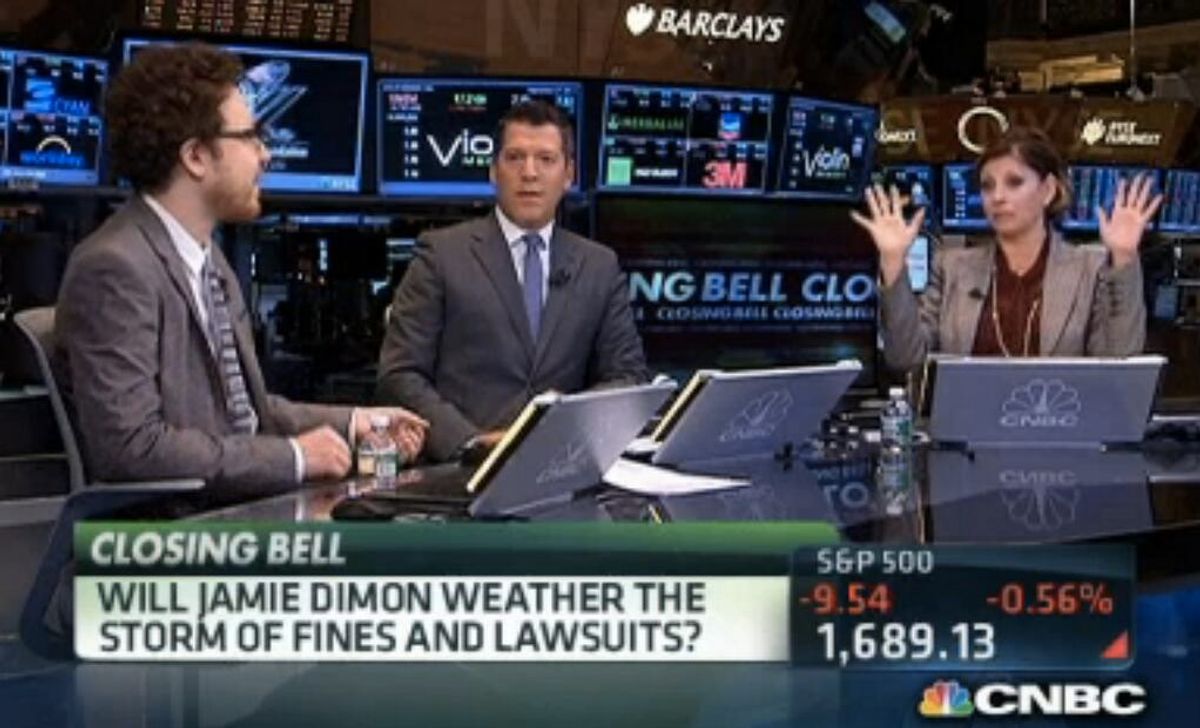 I'm not great on television. That's one reason I don't do it very often. (Another reason is that, for some reason, the major cable news channels don't invite me on all that often.) So it was funny to see, this weekend, as my brief appearance on CNBC's "Closing Bell" last Friday led to a small torrent of positive feedback, because immediately after I finished it all I felt was justified in my reluctance to advance my "brand" with more TV "hits." I'm much more comfortable making my case in print. So here's what I was trying to say.

First off, I should say I'm grateful to CNBC for allowing me -- an ill-kempt socialist of no great renown -- to air my views on their channel, though I suspect they did not quite know exactly what I was, beyond some sort of critic of Jamie Dimon, when they invited me. The producers and crew members I interacted with were all friendly, helpful and highly competent. The segment itself was just bizarre.

Everything about being on TV is unnatural, and the strangeness of this appearance was only heightened by the setting. The New York Stock Exchange is at this point essentially a heavily guarded television studio and occasional film set, which I guess is an appropriate enough symbol of American capitalism in late 2013. The makeup artist -- who did a wonderful job making me look human in a context in which only strange rubber-skinned television creatures appear human -- sort of gave my hair a few desultory spritzes of hairspray and attempted to pat portions of it down. (I am aware that I need a haircut and a shave, thank you.) For the cable news guest, nothing happens for a while until suddenly everything happens very quickly. After you receive your television face, you stand around for a while, ignored, until you're sat down at a desk and asked to argue with strangers.

I was on to be one side of an argument about Jamie Dimon, the chairman, president and chief executive officer of JPMorgan Chase and Co. I was arguing "against." I was up against business reporter Duff McDonald, arguing "for." Except I was actually, really, up against "Closing Bell" co-hosts Maria Bartiromo and Other Guy (OK, he is Scott Wapner, apparently), who, as CNBC anchors, rather openly and proudly consider themselves allies of the great men of Wall Street. And Dimon is generally considered the greatest.

So this was my point: Jamie Dimon should be fired because he has not done a good job of preventing JPMorgan Chase from doing heinous things. He should be fired because JPMorgan has repeatedly violated the law, and engaged in unethical and reckless activities. The "news hook" for this debate was the fact that Dimon had just traveled to Washington, D.C., to have a private conversation with the United States attorney general to negotiate the size and terms of what will probably end up being the largest fine in the history of American financial regulation. JPMorgan has already paid $3.68 billion in settlements this year.

JPMorgan has been and is being investigated for foreclosure fraud, Libor manipulation, an attempted coverup of the trading losses of the so-called "London Whale," for possibly knowing about Madoff and not actually doing anything about him, and, as I mentioned on TV, for bribery in China. That one seemed to anger and confuse Maria Bartiromo, but I can assure her and everyone else that it's not a crazy thing some Occupy hippie alleged in a pamphlet, or the Nation.

The story of JPMorgan's hiring of the children of prominent Chinese officials isn't merely a bit of "everybody does it" nepotism, it's the target of a bribery investigation. An investigation launched by the SEC, and then joined by the Justice Department. I may have erred in citing the notoriously liberal New York Times (part-time professional home of "Squawk Box" co-anchor Andrew Ross Sorkin), when the same information has also been reported in more business-friendly outlets like Bloomberg and the Wall Street Journal. (I also intended to mention energy market manipulation but Bartiromo got really caught up in the bribery thing and I didn't have time.)

It seemed like a pretty simple case: Why should you keep your job if you've consistently failed to stop your company from repeatedly violating the law? Even if Dimon wasn't personally complicit in any of JPMorgan's myriad violations (and even that is a hard case to make), it's obvious that he's unable to competently oversee and manage his sprawling international megabank.

But for CNBC, and for Wall Street, billion dollar fines for violations of the law are just part of the price of doing business, along with litigation costs and "compliance." (And, indeed, Dimon has been praised for belatedly hiring hundreds of new "compliance" officers, to, you know, make sure the bank stops repeatedly violating the law, over and over.) So my point, that Dimon should be fired because he has failed to prevent his firm from violating the law, was a non sequitur.

Their question was, who would do a better job than Jamie Dimon of running JPMorgan in a way that delivers maximum value to shareholders? Who else could keep JPMorgan's stock price so high amid all these tawdry scandals and this "witch hunt" from the regulators? I don't have any good answer to that. Because I don't think Jamie Dimon's job, or his bank, should exist at all in their present states. I think the exclusive focus by corporations on shareholder value has been pretty awful for the world economy and its poor and working classes, and I think the idea that profitability is its own justification is not a viewpoint shared by anyone outside the bubble of the 0.1 percent, but I have absolutely no fucking clue who should run JPMorgan Chase and Co. Let Maria Bartiromo run it, how is it going to get any worse?

So I actually did not do a great job, in my 10-minute professional argument, of making my case. I wasn't completely prepared and I'm not actually an expert, I'm just a guy who reads what smart people write about Wall Street and finance. One of those smart people is Felix Salmon, of Reuters, who used my chaotic and ridiculous CNBC appearance to make a stronger case, supported by data. Salmon answers their question on their terms. Go read him.

The silliest part of the entire experience, especially for someone as uncomfortable with conflict as I am, was sitting there, a foot away from Other Guy, after the segment, as he and Bartiromo spent another two minutes "bantering" before finally cutting to commercial. Bartiromo then almost scolded me as I finally got un-mic'd and prepared to leave. (Other Guy did not say one single word to me, or acknowledge my presence in any way, when the cameras weren't on.) She said something to the effect of how she knew my arguments would play with an unsophisticated audience, but not the wise men and women of CNBC. "We're going to get a lot of hate mail," she said. "That's why you invited me on, isn't it?" I said. And then I got the hell out of there.

Or tried, at least. As I left the trading floor, I immediately took a wrong turn and was reoriented toward the exit by a friendly, silver-haired gentleman in a very nice suit. "What were you talking about?" he asked, recognizing a wayward CNBC guest. "JPMorgan," I said. "I was sort of the liberal punching bag."

His expression became briefly chillier, but as we left the building together he smiled. "The fines? Well, guess we'll just have to raise fees!" And then he walked off and I got on the subway.