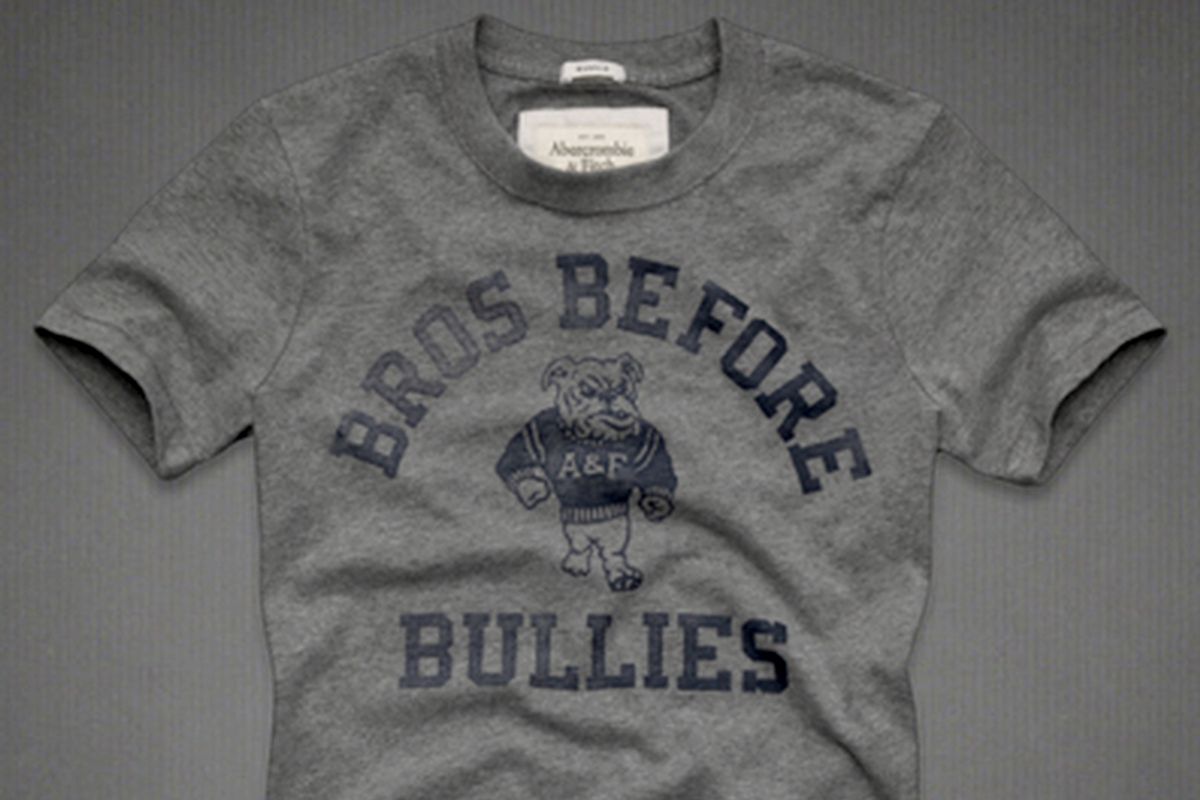 Sometimes the road to enlightenment is paved with a lot of jerk moves. Sometimes it takes somebody who's been a problem to look for solutions. And so it happens that as we enter National Bullying Prevention Month, Abercrombie & Fitch, of all unlikely sources, is getting behind the cause.

You remember Abercrombie & Fitch. Long famed primarily for its softcore shopping bags, the retailer gained a different kind of attention earlier this year when a 2006 interview CEO Mike Jeffries gave to Salon went viral. In the conversation, Jeffries unapologetically talked about his multibillion-dollar brand and boasted, "We hire good-looking people in our stores. Because good-looking people attract other good-looking people, and we want to market to cool, good-looking people. We don’t market to anyone other than that ... In every school there are the cool and popular kids, and then there are the not-so-cool kids. Candidly, we go after the cool kids. We go after the attractive all-American kid with a great attitude and a lot of friends. A lot of people don't belong [in our clothes], and they can’t belong. Are we exclusionary? Absolutely. Those companies that are in trouble are trying to target everybody: young, old, fat, skinny."

Those candid remarks prompted a strong reaction from the considerably populous not-so-cool lobby. The National Eating Disorders Association said that Jeffries’ remarks “foster bullying and discrimination," and Orlando teen activist Benjamin O’Keefe launched an attention-getting petition to pressure the retailer into creating "clothes for teens of all sizes."

There's nothing like a little public shaming to get the ball rolling in a more positive direction. In May, O’Keefe met with Jeffries. In June, the company announced that it would be offering scholarships to high school students who have fought bullying. At the time, Jeffries said, "We’ve listened to the conversations and heard the message. No young person should ever feel intimidated, especially at school, whether for the clothes they wear, or because someone perceives them as different." And now, the company is debuting more anti-bullying initiatives as part its "Are you an Ally?" campaign.

Starting Thursday, high school student and anti-bullying activist Cali Linstrom begins a national 20-school "interactive conference" tour across the country. Todd Corley, the company's senior vice president of diversity & inclusion, said this week the tour will be a chance "for teens to share their experiences and help them to embrace diversity, expressions of inclusion and openness to change." And working with the No Bully organization, it's debuting a trio of anti-bullying graphic tees. Though sales of the shirt won't benefit the charity, Abercrombie says it's making "a donation" of unspecified amount to No Bully. In an appropriately Abercrombie & Fitch manner, the shirts proclaim "Bros Before Bullies" and demand we "Make Bullying Extinct."

In much the same way that Guido Barilla has recently had to learn that when you put your foot in it, you need to demonstrate in concrete ways that you "have much to learn," it's encouraging that Abercrombie & Fitch has spent the past several months rethinking its corporate image and launching tangible initiatives to discourage negative behavior and create incentives for those who are working toward positive change.

It's unlikely a T-shirt is going to make a mean kid change his ways. Yet in the same way that the clothes we wear can contribute to a culture that puts people down, they can also subtly lift them up. But while Abercrombie's recent strides toward being more inclusive and less douchey are a positive and welcome change, it's clear the company still has a long way to go – and that their expectations of what their "allies" in the cause of "diversity" look like is still ruthlessly narrow. Sure, they're deploying Cali Linstrom -- who has battled eating disorders and last spring told the company "Kids can be awesome and full-sized." But their own "no bullying" women's shirts? At least on the brand's website, they only go up to size 10.