"All Is Bright": Christmas with Canadian losers 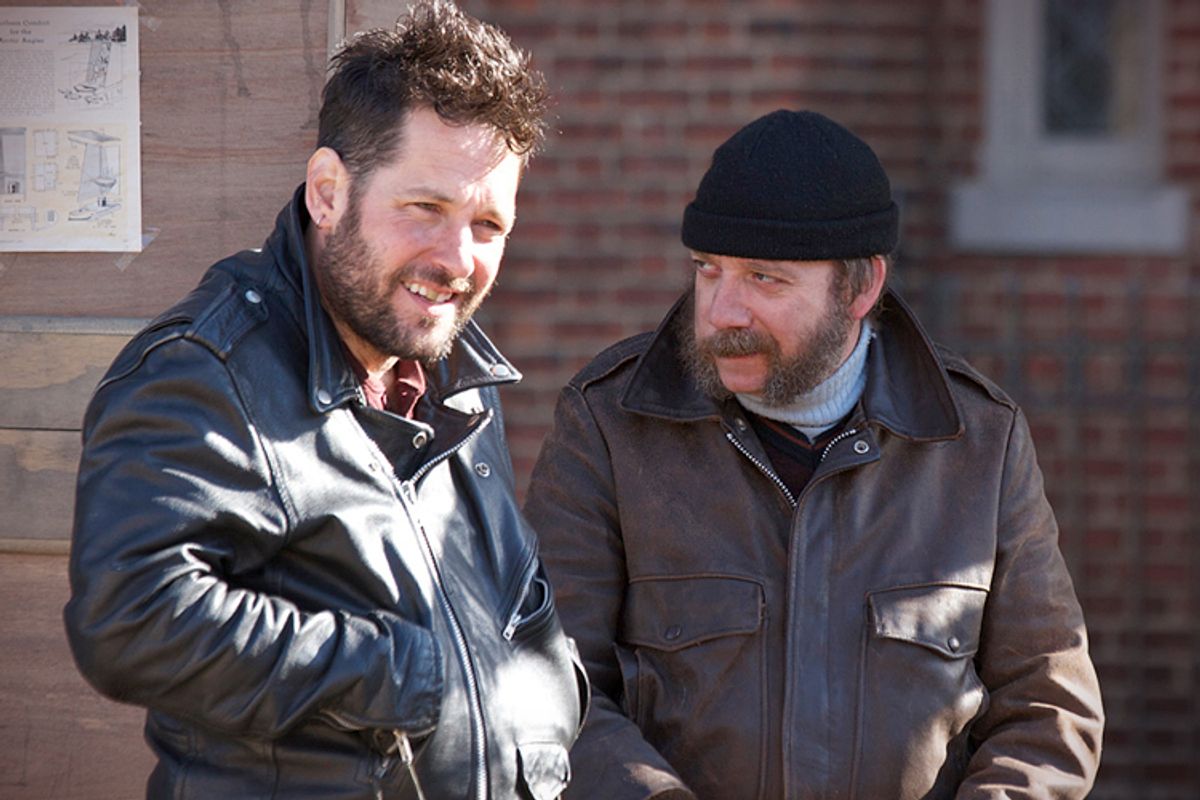 Paul Rudd and Paul Giamatti in "All is Bright"
--

Is October too early for a Christmas movie? With much of the country basking in a heat wave, you might not be ready for the midwinter mood of melancholy struck by “All Is Bright,” which stars Paul Giamatti and Paul Rudd as a pair of lowlife French-Canadians who make a vague effort to go straight by driving to New York City in December with a truckload of Christmas trees. (This is a real phenomenon, as residents of any Northeastern city will attest.) I want to show some love for this delicate little indie, which is only a comedy in the Chekhovian sense, not the ha-ha sense. It’s a difficult movie to “get” in some ways, and one that makes little obvious effort to be entertaining and includes an overly stereotypical portrayal of New York street life. For me, at least, these flaws pretty much disappear against the powerful and pervasive mood of working-class sadness, and the sense that the holiday season for grown-ups is almost always about loss and sacrifice.

Actual Canadians may need to school me on this a little, but one possible problem with “All Is Bright” is that it requires considerable ethnic-linguistic stretching: Giamatti and Rudd don’t just play Quebecers who mainly speak English (those obviously exist) but guys from French-Canadian backgrounds who live in rural Quebec -- or outside Montreal, at any rate -- and speak little or no French. I’m sure that’s possible, since anything is possible, but it leaves you with the distinct impression that we’ve got a couple of name-brand American actors who made this movie quickly and couldn’t take the time to learn a few passable lines in another language. (Granted, Quebec French is pretty tough for outsiders to get right.)

But here’s the thing: Giamatti and Rudd are such strong, unassuming performers, with a bristly, oil-and-water chemistry between them, that they pretty much sell these two implausible guys. By the end of the movie I was completely caught up in these dudes’ quest to redeem something out of lives that have gone off the rails, and had forgotten about the demographic issues. There’s no “Great White North” Canuck-shtick in these performances, although the two guys do throw on extra-heavy Quebecois accents for the benefit of their Brooklyn customer base. Dennis (Giamatti), who dislikes it when people call him Denis, in the French style, has just gotten out of prison after doing a four-year stretch for robbery, only to discover that his one-time partner René (Rudd) now lives with Therese (Amy Landecker), who happens to be Dennis’ wife.

When Dennis shows up at Therese’s house hoping to see his daughter, Therese won’t let him in, holding up a sign to the window that says I TOLD HER YOU WERE DEAD. That’s sort of funny, but it’s not that funny; Giamatti plays Dennis as a guy who pretty much expects this kind of thing, a hangdog fellow with walrus whiskers in whom self-pity and misanthropy are always neck-and-neck. He runs into René, who’s more the cheerful people-pleaser type, maybe not too bright, in the local bar, and punches him out. Then they have a drink and one thing leads to another – in this case, to René hauling Dennis across the American border, concealed beneath a load of Christmas trees (without either of them telling Therese). Partly René feels guilty, partly he’s the kind of guy who can’t say no to people and partly, well, he needs somebody to help him sell the damn trees to Yanks.

Once the action shifts to Gotham some of the Yuletide comedy is pretty minor, but writer Melissa James Gibson (of TV’s “The Americans”) and director Phil Morrison (of the 2005 indie hit “Junebug”) steer away from most of the easy rubes-in-the-big-city material, and unlike so many movies set in New York, “All Is Bright” was actually shot there. The magic of the film largely lies in the uneasy friendship between Dennis and René, who have no hope of going straight without each other (and who have the common bond of loving the same woman), and in Sally Hawkins. Playing another role that could have been ethnic shtick – a Russian pianist named Olga, now a live-in domestic for a periodontist’s family – Hawkins brings a haughty, anarchic, erotic energy that pushes this movie to another level. Olga befriends Dennis for reasons neither of them entirely understands -- maybe in spite of the fact that he starts stealing stuff from her immediately, or maybe because of that. It’s a treat to see two actors this good playing a relationship that officially isn’t going anywhere, but still provides both principals with the fuel they need to keep on living.

This is a Christmas movie, so I probably don’t have to explain that Dennis and René’s New York visit has unexpected consequences, and ends with entirely different results than they were expecting. I can already tell that “All Is Bright” will get only middling reviews, but for me its heartbreaking denouement – with shades of a Raymond Carver or William Kennedy ending – packed a prodigious emotional wallop. It’s not easy to convince people to see an independent film that sounds pretty low-impact, and especially one that is neither satirical nor sentimental and offers no storybook redemption. There’s just enough possibility put forward in “All Is Bright” that it isn’t entirely bleak or hopeless, but its evocation of the real spirit of Christmas is almost too real.

“All Is Bright” opens this week in major cities, and is also available on-demand from cable, satellite and online providers.