Inside the mind of angry GOP: Rep. John Culberson talks to Salon 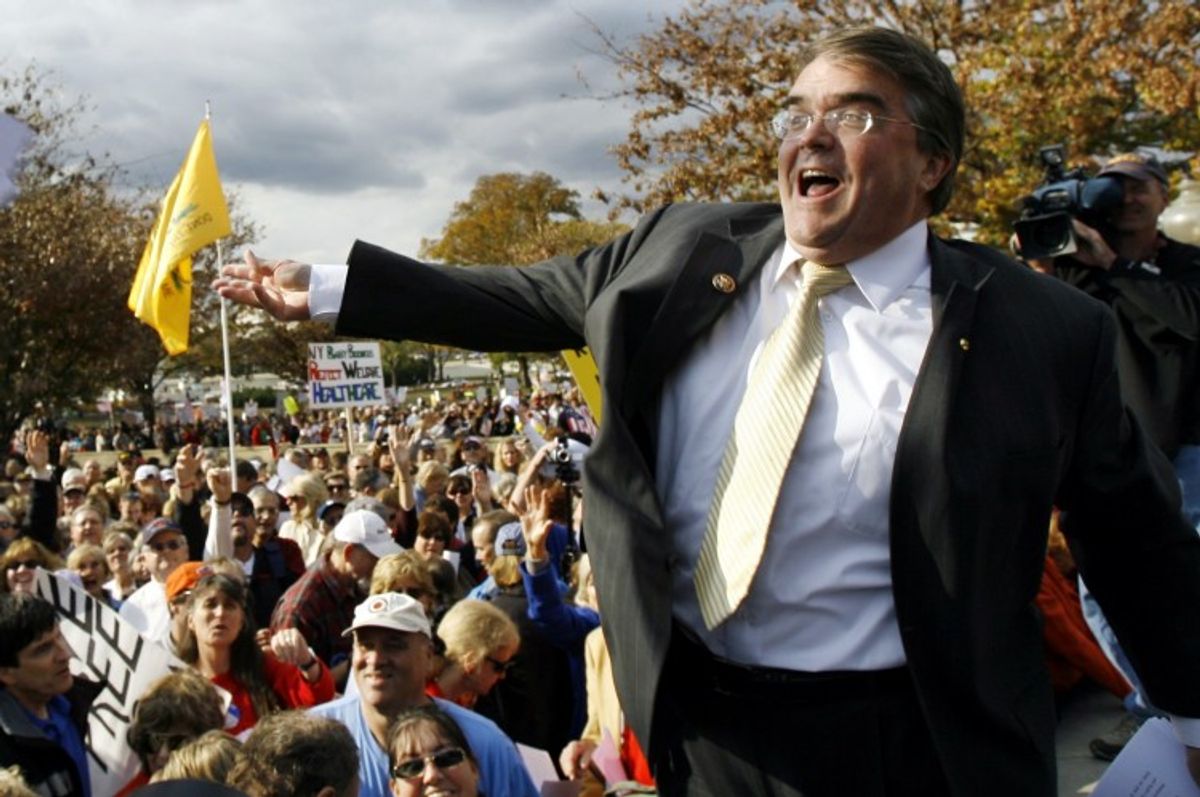 FILE - In this Nov. 5, 2009, file photo Rep. John Culberson, R-Texas, flings a copy of the health care bill out into the crowd during a health care reform rally on Capitol hill in Washington. (AP Photo/Jose Luis Magana, File) (Associated Press)
--

Rep. John Culberson (R-Tex.) made national news when he shared that his reaction to John Boehner putting an Obamacare delay into a continuing resolution to fund the government was, “like 9/11, ‘let’s roll’” -  a reference to passengers who fought back against hijackers on United 93. On Tuesday afternoon, he spoke to Salon for a spirited fifteen minutes about the government shutdown; President Obama’s approach to the leaders of Iran, Syria, and the GOP; and whether Medicare should continue to be a federal program.

What follows is a verbatim transcript of our conversation. (Ed. note: Among other questionable assertions, it is not, as Culberson claims, “an inescapable fact” that Obama shook hands with “the dictator of Tehran.”)

Who’s responsible for this shutdown? How did we get here?

Normally the democratic process requires negotiation and compromise. And House Republicans have now sent over - oh my gosh, what? - three or four different versions, trying to get the Senate and the White House to even talk to us or compromise, make an effort to negotiate. And we get nothing. There’s no interest, nor response, in even negotiating. But he’ll negotiate with the lunatic dictator of Iran, the psycho in Syria, and the - you know, terrorists anywhere. But he won’t negotiate with democratically-elected representatives in the United States Congress. It I think is self-evident. I think the answer to your question is self-evident.

We move four times, he moved zero, makes no effort to talk to Speaker Boehner, but he talks to the psychopath in charge of Tehran, who is building a nuclear weapon for the specific purpose of annihilating Israel, and driv[ing] them into the sea. I think the facts speak for themselves.

So it’s your view that Obama has been more willing to talk to foreign leaders, including Iran’s, than to talk to congressional Republicans?

It’s not my opinion. It’s a fact. He won’t even talk to - nor will Harry Reid - they won’t negotiate with Speaker Boehner. They won’t talk to House Republicans. They won’t appoint conference committee members. They’re not following the most fundamental rule of a democratic republic: that you always find common ground, and that begins by talking. He’s talking to America and Israel’s mortal enemies, but he won’t talk to House Republicans. It’s just, I think, a terrible disappointment, and very revealing of the Democrat mindset. This is not the way democracy operates. We learned that a long time ago in grade school or middle school.

So what is the mindset then that leads the president to make these decisions you’re talking about?

You’re I know working real hard to write this story as favorably as you can obviously for the Democrats. But these are inescapable facts. The Democrats will not appoint conference committee members. They will not negotiate. Harry Reid and the White House have both said repeatedly they’re not going to negotiate. How is that leadership in a democratic republic – a constitutional republic, excuse me. How is that honoring their oath of office?

I mean it’s just - it’s common sense. If you and I have, are working on, you know - if I’m trying to buy your house, you sit down and you negotiate. Figure it out. They have said repeatedly they will not negotiate. Where their oath of office requires them to follow the Constitution, which contains three branches of government, and we, all of us, have to negotiate and work together. And we’ve been ready, and we’ve been trying different approaches, and the response we get is no negotiation. So I think the facts speak for themselves.

So is the issue then about willingness to talk to Speaker Boehner, or to make offers to move on the president’s position on the budget or the Affordable Care Act?

He is negotiating with terrorists and criminals, and criminal dictators around the world who are sworn to annihilate our best friend on the planet, Israel. Yet he won’t even bother to negotiate with the democratically-elected representatives of the Congress. I mean the facts speak for themselves.

I know that’s not what you want to hear. Because I gather the national press corps, you guys all operate as an extension of the White House press office. But the facts speak for themselves. If it doesn’t fit your story you know, I’m sorry. It’s just – those are the facts. And if you’re going to report the facts, those are the facts.

He shook hands – first time the United States President has shaken hands with the dictator of Tehran since 1979 is Barack Obama, and he did it right in the middle of when he was telling us no negotiation. I mean, these are facts, And you’ve seen the response is no negotiation. I mean that’s inescapable fact. Right? What am I missing?

If a person currently does not have health insurance, and they have a pre-existing condition –

Your focus is who’s to blame.

That’s been the law for some time, Josh. That’s not affected by what we’re doing. The only effect of what we’re asking here most recently in the delay, everything we’ve asked, is for the, any new provisions that took effect October 1 or later. Our first bill said fully, you know, just stop anything that takes effect after October 1. Their response is no negotiation. Second we said, OK, then let’s pause everything that takes effect after October 1 for one year. And the, Harry Reid and Obama’s response is no negotiation. So then we say, OK, what about the individual mandate that takes place on October 1 - let’s postpone that for a year. And the response is no negotiation. Pre-existing conditions has been around for some time. Kids stay on their parents’ insurance until they’re 25, or 26, or whatever it is – that’s been the law. That’s untouched.

So do you want to repeal the Affordable Care Act though, or not?

It needs to be repealed and replaced to give the, to give American consumers the freedom to buy policies across state lines, to allow small employers to pool together to strengthen their negotiating power so they have the same leverage that a big employer like ExxonMobil does, to get better rates. And we need to get the federal government the heck out of healthcare. It’s none of their business, it’s not in the Constitution, and it’s a violation of our most sacred right as Americans to be left alone.

So should the law allow companies, insurance companies, to deny people coverage because of pre-existing conditions, or not?

You can already take care of that. You can do that through a high-risk pool-type situation at the state level, as we do with automobile insurance. That’s never been a problem. We’ve always had, there’s been repeated pieces of legislation filed by Republicans to allow for coverage for pre-existing conditions through high-risk pools, shopping across state lines to buy coverage, pooling together to reduce rates.

This is, again, inescapable facts. It doesn’t sound like it fits your narrative.

Well, I want to make sure I understand what you’re saying. Because what you’re talking about is high-risk pools that would offer a way for people who may have a pre-existing condition potentially to find a plan that would accept them, but you’re -

Yeah. You have to do it. It’s the only way to do it, is a high-risk pool. And do it at the state level. It’s far better.

So you don’t support legally preventing companies from denying people based on a pre-existing condition?

What does that mean for Medicare then?

Well, should Medicare exist as a federal program?

That’s not even relevant to the conversation. Medicare has been the law for decades.

Do you believe that it should continue as is?

It’s been the law for decades. I’m not sure what you’re looking for.

Does that mean that Medicare should end as a federal program?

Medicare is not at issue. Medicare is a, [has] been in place for decades and unless it’s repaired, it will go bankrupt. And it is on track to be bankrupt. I don’t know how old you are, but if you’re under the age of 54, your Medicare hospital fund doesn’t exist. It can only pay fifty cents on the dollar. It has to be fixed. It’s bankrupt, and we have an obligation as guardians of the treasury to prevent the program from going bankrupt.

So how should Medicare be fixed?

I don’t know what you’re looking for. I mean are you – I have to leave in a couple of minutes. I know you’re working real hard here to get a good story for Obama and the Democrats, but I just can’t help you there. I’m trying to give you the facts. And I’ve got to run. You’re wandering all over the map here.

Again – I know you have to go in a minute, but what kind of fix do you want to see to Medicare?

We want to prevent it from going bankrupt. It’s going bankrupt rapidly. As it is – as is Social Security. Our – fundamentally, Texans want to be left alone. It’s a fundamental right of all Americans to be left alone. Leave us alone. We want the government out of our lives, out of our pockets, out of our business, stay out of my church, away from my kids, my synagogue, and it’s not complicated. I mean I was sent here by my constituents to represent them, and I’m doing it in a way they have – the way they expect of me.

I’ve really gotta run, I’m really not sure what sure what you’re after, but I’m sorry I can’t help you, you know –

What kind of repair do you want to make to Medicare then?

Sure. Well, again, I appreciate your taking the time to share your view. I do want to understand –

And I appreciate it. Thank you very much Josh. I’ve really got to run. Thank you. Good-bye.