Shut down the military, too!: Why exempting it is absurdly unfair

I respect service members, but giving them special treatment over other federal workers is dangerous -- and wrong 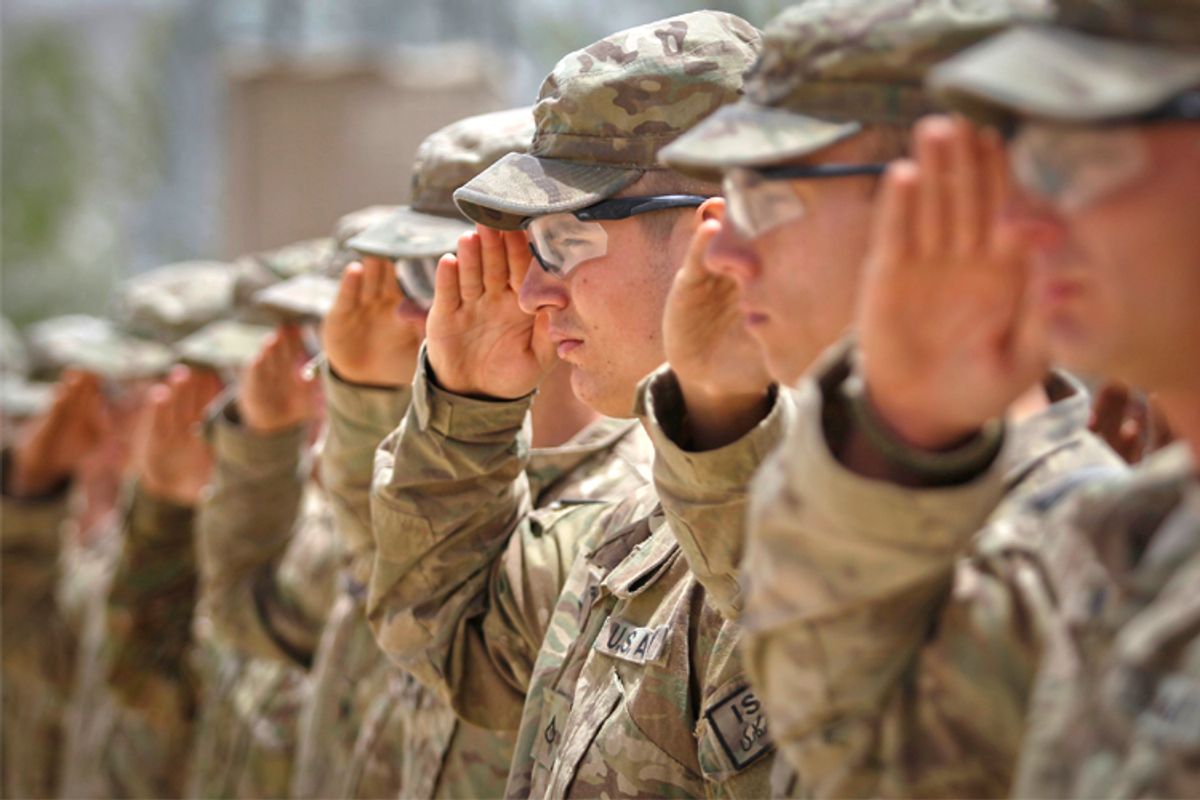 Yesterday, House Republicans came up with a novel idea to fund only the parts of the government that people would notice – things like the Veterans Administration and national parks – in an attempt to point the latest in a series of fingers at the opposition for their cruelty in ignoring important priorities. Democrats thundered back that such piecemeal efforts are “not serious” and “no way to fund a government.”

But that is exactly how one part of the government was funded just before the Sept. 30 deadline. Without fanfare on Monday night, President Obama signed the “Pay Our Military Act,” ensuring paychecks throughout the government shutdown for all members of the armed forces, including active-duty reserve members, along with civilian personnel and contractors who happen to “provide support” to armed forces operations.

How can I put this delicately? This is wrong.

It’s a slap in the face to 800,000 federal workers, who do not deserve unfair treatment because their uniform is a different color, and their service to the country in a different form, than members of the military. The words of Sen. Ted Cruz – “the soldiers and sailors and airmen and Marines who risk their lives for this nation should not have their paychecks held hostage to any government shutdown in Washington” – apply to every member of the federal government, and singling out service members for hero worship is as pernicious for our foreign policy as it is for our budget debate.

To preempt the inevitable “why do you hate our troops” criticisms, the question is not whether men and women dodging bullets overseas or defending America’s shores and skies deserve to have to work without pay for as long as Congress denies a government funding resolution. The question is whether everyone else who serves the public does.

After all, among those public servants sitting at home today include men and women who save lives every day, finding cures for diseases at the National Institutes of Health and the Centers for Disease Control. They include those who ensure that Americans in need get lifesaving necessities, such as employees with the Social Security Administration or the United States Interagency Council on Homelessness or the Women, Infants and Children (WIC) nutrition program. They include those who go out on the front lines every single day to protect Americans from poison, injury and death, like the brave folks at the Food and Drug Administration and the Consumer Product Safety Commission. Numerous Americans won’t get flu shots because of the shutdown. Two hundred cancer patients a week will get turned away from federal clinical research centers. If the military deserves their pay because they keep Americans from being killed, then those who quite literally keep Americans alive probably rate the same treatment.

Consider the plight of our “essential” personnel – those investigating and prosecuting criminals in federal law enforcement, those guarding federal prisons in the Department of Corrections, those keeping planes from crashing into each other in air traffic control, those engaged in the defense of U.S. “national security.” They all have to go to work today and every day of the shutdown, with no guarantee of a paycheck for that service, maybe ever. Congress would have to approve retroactive pay for essential personnel after the shutdown ends, and there’s no telling whether they will agree to do so. Is someone going to seriously make the argument that workers tasked specifically with promoting public safety are somehow inferior because they aren’t requisitioned camouflage?

To those who argue that military members deserve pay because they "risk their lives," that argument needs to incorporate all the federal workers not being paid currently whose job involves inordinate risk. That includes agents for the FBI and CIA, members of the U.S. Forest Service (which includes federal firefighters), surveyors studying everything from fracking wells to hazardous waste to dangerous public lands, mail carriers who fly into remote areas, Department of Corrections personnel (and actually, anyone who drives a car or participates at a work site, where there are untimely accidents at a rate of nearly 16 deaths every day).

But it’s actually broader than that. It takes an exceedingly narrow conception of “freedom” to claim that the only public servants who deliver it are the ones with guns and tanks and fighter jets, or even the ones with the specific objective to protect Americans. Every single federal worker who contributes to the relatively smooth functioning of the state is indisputably engaged in that project. No one subset of this workforce should receive special treatment, as if their job is somehow more critical to serving the Constitution. The woman who helps safeguard America’s electrical grid keeps me free. The man at the Commodity Futures Trading Commission to prevent dangerous financial products from damaging the economy also defends this country. The scientist at the Environmental Protection Agency providing data on the catastrophic effects of climate change bears a tremendous burden for our future as a planet. They aren’t in the military. They are no less critical to our society.

Moreover, as Heather Hurlburt of the National Security Network recently pointed out, military operations increasingly rely on civilians, to help with supply lines, travel orders, mess hall activities, intelligence gathering and much more. Paying military service members during the shutdown is actually paying the defense industry to pretend they’re working. It’s not for nothing that the Pentagon spent $5 billion on weapons the night before the shutdown, before the logistical support staff all vanished.

This goes part and parcel with a ubiquitous glorification of the U.S. military. Certainly politicians cannot help but valorize the military at every opportunity. President Obama sent a message to all federal workers about the shutdown but also a unique one just for troops and Defense Department personnel. And the same goes for society as a whole, not just with “Greatest Generation” rhetoric but with tangible benefits. When banks got in trouble for foreclosing on active-duty service members overseas, they went out of their way to correct the problem, giving them free houses and cash awards; never mind that millions of homeowners who didn’t happen to be in the Armed Forces were nevertheless abused, and saw next to nothing for their pain and suffering.

Singling out the military for special praise, special favors and special treatment conveys to the public that the Pentagon in fact represents the superior function of government, the only one worth protecting no matter what befalls us. In our conducting of foreign policy, it signals that military action necessarily equals legitimate action, that only the guns of war are worthy of the respect of a grateful nation. One would have thought that the public sent a message during the debate over use of force in Syria that they did not actually favor such a bias toward military solutions, but clearly, politicians have not heeded this message.

You do not have to be a critic of U.S. foreign policy to find this situation troubling and just plain wrong. It delegitimizes the vital functions of government and puts the defense sector on a higher pedestal than everyone else. The president and the Democrats were right yesterday when they said that picking and choosing what parts of the government to protect during a shutdown was absurd. But they betrayed that principle with the military pay bill. And don’t think the 800,000 men and women on furlough today didn’t notice. If you happen to see one of them today, don’t forget to tell them, “Thank you for your service.”