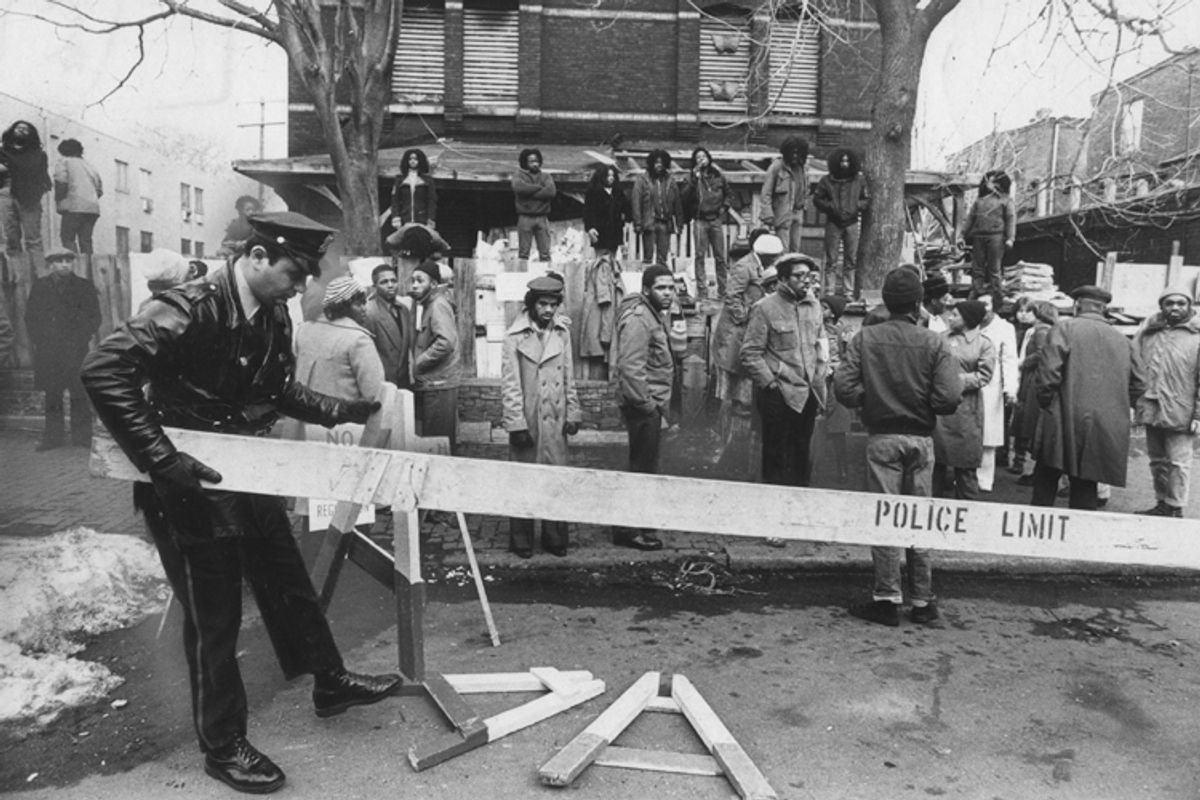 MOVE members and police during the 1978 confrontation outside MOVE headquarters, in a still from "Let the Fire Burn." (Zeitgeist Films)
--

In Jason Osder’s disturbing and extraordinary new documentary “Let the Fire Burn,” which entirely consists of archival footage, we see a Philadelphia police officer named James Berghaier testify at a commission hearing about the events of May 13, 1985. That was when police dropped an incendiary device (a bomb, in plain English) on a rowhouse in West Philadelphia, igniting a massive fire that killed 11 people – five of them children – and destroyed 61 homes in a working-class neighborhood. Although it happened almost three decades ago, at a time of immense urban dysfunction in America, the Philadelphia MOVE bombing has a startlingly contemporary feeling, partly because it was one of the first all-day live news events, captured in extensive detail by numerous video cameras.

Most of the official testimony we see at the hearings is standard buck-passing and ass-covering, much of it either misinformed, misleading or flat-out false: Members of MOVE, the radical group inside the house, had started the violence; the six adults in the house were dangerous terrorists with automatic weapons (not true) and we had to proceed with caution; in dropping the bomb and letting the fire burn unchecked, we were simply doing what we were told. The police commissioner even says that he does not know whether the children in the house had fired on the police, and I suppose as a technical matter that must be true. He is not asked whether he finds that likely.

Berghaier’s testimony is quite different. The stone-faced police demeanor is missing; this young officer clearly feels conscience-stricken about what happened, and is visibly grieving. Of the hundreds of cops at the scene, he was the one who risked his life to save the only two MOVE members, an adult and a child, who made it out of that house on Osage Avenue. When asked by a commission member what he thought about during the assault on the house, Berghaier says he can’t really answer the question, then does so. “I thought a lot about those kids. I thought about my kids.” One member of the commission, an African-American man, praises him as a hero and one of the few bright spots of that whole terrible episode. After his testimony was over, Berghaier went back to work, and found a racial slur written on his locker. He quit the force soon thereafter.

Welcome to America, people, where the past, as Faulkner famously observed, is not even past. That wrenching story of hope and hatred from 28 years ago hit me especially hard in this year of white rage and white derangement, the year of George Zimmerman and Paula Deen and a government shutdown engineered entirely by a small group of congressmen who represent a lily-white, neo-Confederate nation within a nation. Half a century of evil and insidious racial politicking has brought us to this point of right-wing wish-fulfillment apocalypse, along with the profoundly racist congressional gerrymander of 2010 and the creeping fear among many white Americans that the country they thought they understood – thought they owned -- has been yanked out from under their feet.

Statistics and recent electoral history paint a deceptive picture of an increasingly diverse society that mostly appears harmonious, despite worsening economic inequality: White births are now a minority, the white majority population continues to shrink toward 50 percent, and a moderate biracial Democrat has been comfortably elected president twice, winning several previously conservative states. But a great many white people, more than anyone really wants to admit, find these facts profoundly troubling. They have been pandered to for generations by conservative politicians who assured them that their mythological vision of a white-picket-fence, exurban America was more authentic than anyone else’s. I remember covering George H.W. Bush on the campaign trail in 1992 – the son of a senator and Wall Street banker, raised in Greenwich, Conn., and educated at Phillips Andover and Yale – when his stump speech included lines about “rural America, real America.”

Of course “real America” hasn’t been rural since the 19th century, and white panic about the changing nature of American society goes clear back to “No Irish Need Apply,” the “gentleman’s agreement” that barred Jews from elite universities and the housing covenants that prevented black families from moving to the suburbs even in states where there was never legal segregation. (F. Scott Fitzgerald specifically mocks this racial paranoia in the character of Tom Buchanan in “The Great Gatsby,” published in 1925.) Every time we suppress that stuff in American life, it comes boiling back up in a different form, and the government shutdown strikes me as a long-delayed sequel to Pickett’s Charge, a self-appointed and doomed crusade on behalf of White America, flipping the multicultural usurpers the double-handed bird as it burns down the house. It would almost be noble, if it weren’t evil and pathetic and damaging.

As my colleague Joan Walsh has repeatedly observed, the racial subtext of American politics in 2013 – and hell, it’s the text, not a subtext – is impossible to miss, but every time you bring it up you get lambasted by the right as a race-baiter. I got a similarly overheated response a few weeks ago when I wrote a column about the racially coded public discourse, especially on the right, surrounding the bankruptcy of Detroit and the post-Katrina problems of New Orleans, which to my mind was making pretty obvious points. Literally hundreds of people wrote in to remind me that those cities had primarily been governed by black Democrats, as if local elected officials had anything to do with the cultural and economic questions I was talking about (and as if I had some interest in protecting the Democratic Party). If you really believe that old-school racist vitriol has been banished from the public sphere, by the way, you haven't been reading the comments on those articles, or any on dozens of others about racial topics published on our site this year.

Of course it’s not sufficient to describe the government shutdown and the hysterical attack on Obamacare as exclusively a matter of racial animus, any more than one can describe the MOVE firebombing in those terms. Philadelphia had a black mayor at the time, Wilson Goode, who presumably could have ordered an end to the disastrous confrontation at any time but had vowed to clear MOVE from that house and didn't want to look weak. (It was Goode who uttered the phrase that gives Osder’s film its title, and he might as well order it engraved on his tombstone.) MOVE's neighbors, who were mostly black, definitely wanted the group out, although it's safe to conclude they didn't want an entire city block's worth of family homes incinerated in the process. At any rate it's silly to pretend that the election of one African-American politician somehow neutralized the poisonous history of policing and race relations in Philadelphia, or dismantled the deeply ingrained attitudes that led the cops to treat a tiny radical sect – who despite their angry rhetoric had little or no actual weaponry – like an entrenched battalion of Viet Cong guerrillas.

If anything, Mayor Goode’s election likely galvanized a semi-conscious backlash among the predominantly white police department and other traditional power centers in Philadelphia, a phenomenon quite similar to what we see today on a national scale. It’s important to say, as Joan has done, that most white people in America, including the most hardcore Southern Republicans, are no longer “racist” in the old-fashioned sense of the word. Indeed, they are not racist at all, as they understand the term. They do not don bedsheets and go to Klavern meetings; they do not call for segregated public bathrooms, seek to ban interracial marriage or preach the genetic inferiority of blacks. Those views endure, and not just among isolated white-supremacist whack jobs, but it is no longer acceptable to express them, even in private.

So nearly all conservatives will continue to insist that there is no racism implicated in the politics of the shutdown, because they’re so steeped in it they can’t even see it. One of our two political parties has been kidnapped by zealots who appear willing to wage a self-destructive and even suicidal war against a half-baked half-measure to provide health insurance for most (but by no means all) uninsured Americans, a plan in large part devised by the man who was that party’s most recent presidential nominee. That plan has variously been compared to the 9/11 attacks, to slavery and to Soviet Communism; it was evidently hatched in hell by Satan and Joseph Stalin, rather than in Boston and Washington by Mitt Romney and a bunch of insurance executives.

It isn’t an accident, as Joan has observed, that this plan abruptly seemed to change character once it was appropriated by our first black president. The interests of the GOP’s corporate power base and its Ayn Randian free-marketeers, which are often in conflict, suddenly coalesced with the 50-year Republican strategy to depict the federal government as “an oppressor that works primarily as the protector of and provider for African-Americans, to the detriment of everyone else.” Republicans have carefully fed and nurtured this sense of racial grievance among the white working class, leading to pollster Stanley Greenberg’s famous analysis that suburban whites in a previously Democratic county in Michigan saw government “as a black domain where whites cannot expect reasonable treatment.” That was 30 years ago, by the way, around the same time as the MOVE atrocity.

Remember all that breast-beating within the Republican Party after Mitt Romney’s defeat, when Karl Rove’s all-white path to victory had been exposed as a sham and everybody was saying the party had to reach out to Asians and Latinos or risk electoral irrelevance? Well, never mind. First of all, Ted Cruz! Mission accomplished. More important, the white-pride caucus of the all-white party, the Tea Party congressmen from apartheid America, have fought back with a vengeance. They have grasped (or understood all along) that the GOP has an ironclad congressional majority until at least 2020, and that they don’t need the White House – or any nonwhite support at all -- in order to control the political agenda.

John Boehner and Mitch McConnell and Karl Rove and the other so-called Beltway pragmatists of the Republican Party have relied on angry white people for political victories for decades. They placated them and pandered to them and fed them an extensive line of bullshit, and absolutely could not afford to alienate them, but were scared of them the whole time. (Many Republican operatives will tell you, way off the record, that the Republican base is crazy.) Now those white insurrectionists have risen up and taken their former leaders prisoner, which carries a certain poetic justice. They “want their country back." Failing that, they want to let the fire burn.

“Let the Fire Burn” is now playing at Film Forum in New York. It opens Oct. 18 at the Gene Siskel Film Center in Chicago and the Nuart Theatre in Los Angeles; Nov. 1 in Atlanta, Boston, Denver, Hartford, Conn., Philadelphia, San Diego, San Francisco and Winston-Salem, N.C.; Nov. 8 in Minneapolis and Portland, Ore.; Nov. 15 in Boca Raton, Fla.; and Dec. 6 in Ithaca, N.Y., Seattle and Washington, with more cities and dates to be announced.